“What would a grimdark, totally intimidating hero (who still has a strong moral code against killing) do?” superhero Faith asks herself as she protects her office mates from an array of bullets by two henchmen in black suits. Her colleagues have just learned the secret that the easygoing, upbeat Faith Herbert is really the not-to-be-reckoned-with superhero Zephyr.

“Oh right. Make the bad guys think I don’t have a strong moral code against killing,” she says, right before capturing the men and flying them through the air. Just another day at the office.

Faith, a Valiant comic featuring the title character, has sold out five times in its limited-run series, a significant feat in in the comic book industry. Valiant recently announced that Faith will debut in her own monthly on-going series in July 2016.

Jody Houser, who writes Faith, began writing webcomics a decade ago and wrote IDW’s “Orphan Black,” a sci-fi series about cloning which included a host of lead female characters. Below, Houser and Valiant’s editor-in-chief Warren Simons discuss why Faith resonates so strongly with readers.

What should we know about Faith “Zephyr” Herbert?

JODY HOUSER: Faith is a lifelong comic book fan, sci-fi geek and fantasy lover who always read about superheroes and loved them. Then one day she got superpowers of her own and got to be the superhero she always dreamed of. She’s out on her own as an adult for the first time in a new city, trying to make her mark on the world as a person and as a superhero.

How did Faith get her start as a superhero?

HOUSER: She’s what is called a “psiot,” so her powers are psychically based. In the previous Valiant series “Harbinger,” her powers were unlocked by a fellow psiot named Peter Stanchek. She joined up with Peter and a group of other teenage psiots, who called themselves the Renegades, who fought to bring down the corporations that were trying to manipulate the psiots for their own purposes. 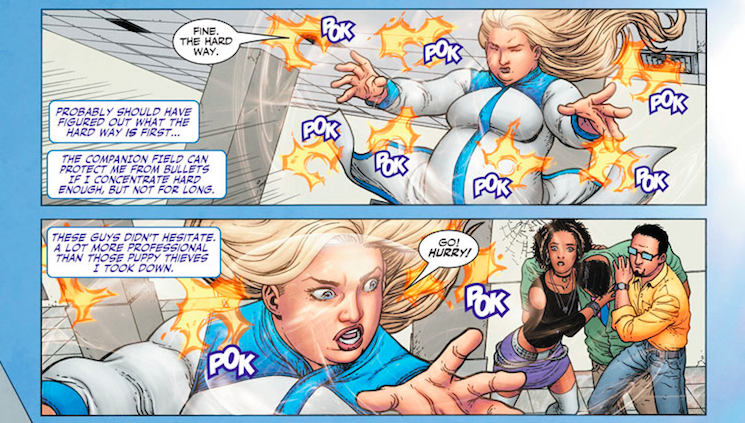 Faith’s secret identity is revealed as she fends off attackers at her office. Faith #3, March 2016. Art by Pere Perez. Photo courtesy of Valiant Comics

How big of a deal is it in comic books for a superhero to get her own monthly series?

HOUSER: I think it’s maybe happening more and more these days. Just a few years ago, Marvel didn’t have any female-led superhero titles. Now I’m pretty sure they’re in the double digits, Valiant has had two with Faith and Dr. Mirage, and DC Comics has given Batgirl two books. I think for female superheroes it’s becoming more and more common to see them leading their own titles.

“I think about her weight only in terms of making sure that I am treating her with respect, and, in a sense, not treating her any differently because of her weight.”–Jody Houser
There is often an excitement on behalf of female comic book readers when they see a lead female character and, for that matter, a female comic book writer. How does this make you feel?

HOUSER: I think it’s really gratifying to be a part of a book and a project that has touched a lot of people and meant a lot to fans. The conventions I’ve done so far this year I’ve had so many people come up and thank me for being a part of this book and writing the character with the respect that she deserves. It really means a lot to me to hear how much she means to readers.

SIMONS: Jody’s done a wonderful job with Faith. The response has been extraordinary. She’s crafted a magnificent story that taps into the heart of one of Valiant’s best characters, and I think that’s really the key. If you’re true to the character, and work with talented people who are great collaborators, success will follow. 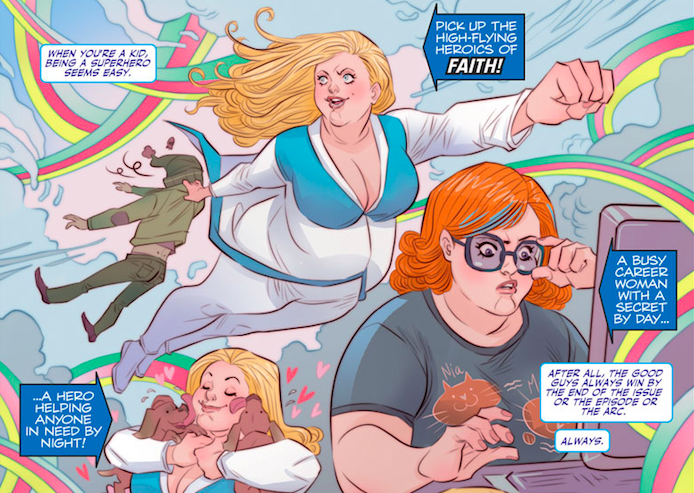 “A busy career woman with a secret by day…a hero helping anyone in need by night.” Faith #2, Feb. 2016. Art by Marguerite Sauvauge. Photo courtesy of Valiant Comics

How does Faith’s body type influence her story?

HOUSER: I think about her weight only in terms of making sure that I am treating her with respect, and, in a sense, not treating her any differently because of her weight.

How have readers responded to her?

SIMONS: Faith was created in the early 1990s by Jim Shooter and David Lapham, the original creative team of the Harbinger title. It was a big hit for the company back then, but, in that incarnation of the title, Faith was one member of a larger team of super-powered teenagers.

We’ve always loved her as a character — she’s the optimistic heart of the Valiant Universe — and we were excited about launching a book with her at the center. The reaction from the public has been extraordinary. She’s become a worldwide phenomenon.

READ NEXT: How I use comic books as a learning tool in my social studies classroom

Do you get tired of being asked questions about Faith’s weight or gender?

HOUSER: I definitely do wish more interviews would focus on different aspects of the character because I think there’s so many great elements to her. Her body and her gender are only a small piece of who she is. 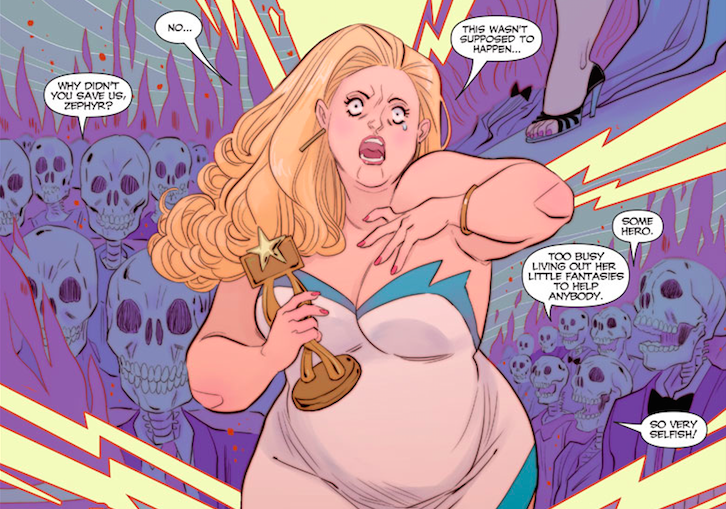 “Too busy living out her little fantasies to help anybody.” Faith’s fantasy turns into a nightmare when she thinks about the lives she has yet to save. Art by Marguerite Sauvauge. Faith #3, March 2016. Photo courtesy of Valiant Comics

Do you think Faith attracts a diverse audience?

HOUSER: People check out Faith because they see something in her that they maybe haven’t seen in comics before. I also think there is a lot to be said for the art talents of Marguerite Sauvage and Francis Portela, who worked on the mini-series, and Pere Perez, who is going to work on the ongoing. They treat the character with such respect and make her so lively and beautiful. I hope for my part that the story is exciting enough that people keep checking out what’s happening next.

A big criticism of the comic book industry’s recent work toward diversity is that there aren’t enough creators from diverse backgrounds. Do you agree with this criticism?

HOUSER: I’m actually part of a Facebook group of women professionals working in comic books, and there are several hundred of us. We are helping to advocate for each other, making sure we are on panels at conventions, and invited as guests to conventions. We are trying to be a resource for people looking for women in comics and may not be as familiar with the creators, editors and other professionals that they should be. I definitely think things have gotten better, but there is still room for improvement. 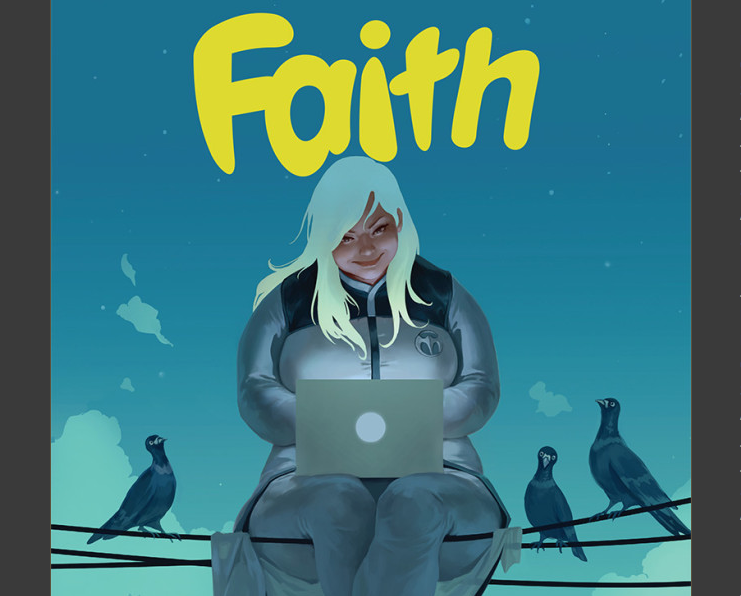 Although she’s been through a lot, Faith remains a positive and uplifting character. How is she different than a lot of other comic book superheroes in this way?

HOUSER: There has definitely been a trend toward the dark and gloomy superheroes. Don’t get me wrong, I love those and read plenty of them. I got my start in comics writing horror, so I’m not against darker stories. But I think in terms of superheroes, it’s always important to have those examples of positivity and hope. I think that’s really the core of where superheroes came from, why we need them so much, and why they continue to be so important in our culture. They really are the modern American myth, in a way, and you really want that represented in the comic books that are coming out, especially for the newer generations.

Have you had to deal with any criticism of the character or her body type?

SIMONS: Not at all. Diversity is one of the great strengths of the current marketplace. It only makes comics stronger, better, with the ability to reach a broader audience. I think Ms. Marvel’s been absolutely wonderful. I was lucky enough to work on books like TRUTH nearly a decade ago — which featured an African-American Captain America — so I’ve been able to see this evolution firsthand, and it’s been terrific. At Valiant, we’re always trying to innovate, and focus on what’s next, and let the story lead us in the right direction. It certainly happened with Faith.

Interview has been edited for length and clarity.

Left: Cover photo of Faith by Marguerite Sauvage. Faith Herbert on the left also known as superhero Zephyr on the right. Photo courtesy of Valiant Comics