Will the ancient Buddhist temples of Bagan turn into Disney World?

Chief arts correspondent Jeffrey Brown is writing from Myanmar (formerly Burma) as part of a new series “Culture at Risk.” Learn more about why Brown is there in his reflections “Is culture at risk in Myanmar?“

Five-thirty in the morning and we are climbing the narrow steps up to the top of Shwesandaw Pagoda in the dark. That, of course, is the point if we’re to be there in time to watch the sun rise over a plain of pagodas and temples that date back a thousand years — Shwesandaw itself was erected in 1057. But, still, dark, barefoot (no shoes allowed on the temples), steep and yours truly is not a fan of great heights. It is, at least, cool. The coolest time of the day, before temperatures on this dry, dusty plain top a hundred degrees.

So, make it to the top, take a breath and look out into the distance: This is Bagan, capital of a powerful kingdom in medieval times with a population that equaled or outstripped European cities. It’s a huge area, stretching some 26 miles from the banks of the Ayeyarwady River and it is filled with more than 2,000 temples, pagodas and other religious shrines. Some are enormous — off in the distance now one is dramatically lit in the darkness. Other large structures are seen as silhouettes slowly coming into the light. These stand out like hilltop fortresses in a variety of elaborate shapes built in different architectural styles over the years, with towers reaching to the sky. Many more are small, some very small, dotting the landscape, again in various shapes and forms — some rather simple bell-shaped domes that seem planted in the ground. 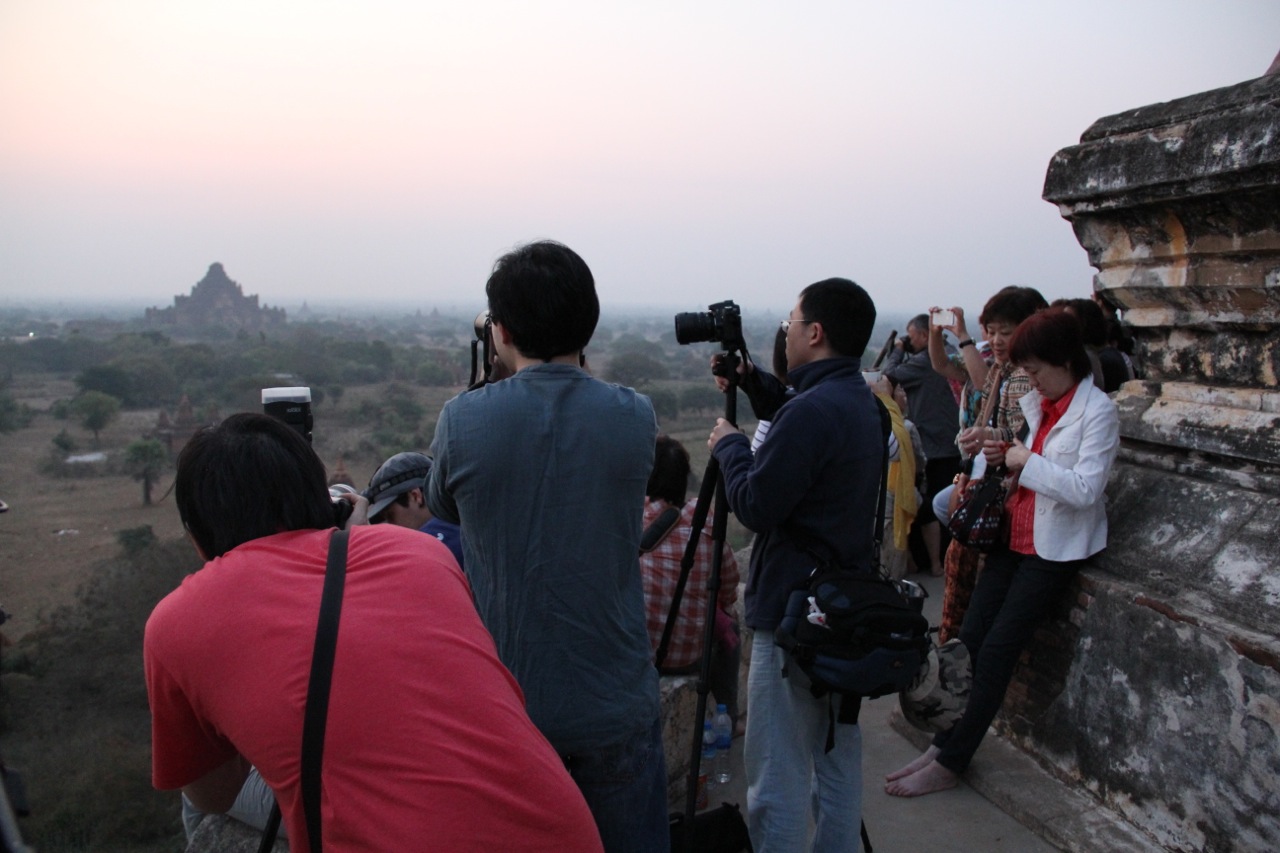 Tourists crowd atop the Shwesandaw pagoda for the first glimpse of dawn in Bagan. Photo by Mary Jo Brooks/PBS NewsHour

Marco Polo, my guidebook tells me, came through here in 1277 and wrote that the towers “make one of the finest sights in the world.” Whether or not he stood on this particular pagoda is not recorded. Nonetheless, many years later one can only agree: they are spectacular and unforgettable. Sunrise will never be the same.

A “spectacular scene” but also quite a “scene” in itself. Look around you; this is one of the few pagodas that people are still allowed to climb so we’re not alone, not by a long shot, even at this hour. Perhaps 200 others are on the pagoda now, at different levels, speaking many languages, having arrived by buses, cars, some on bicycles rented out by local hotels. In fact, it’s rather crowded. Very polite — we’re all aware of the special experience we’re sharing — but there’s jockeying for positions closest to the edge and the unimpeded view. My cameraman Marc, a big fellow on a mission, is a clear winner and I hover just behind him. Some young fellows — Scandinavians? — climb up on the tower above us. At one point later we see a young woman perched precariously alone on a high stone wall, waving a towel and yelling — to the ancient kings? Another group begins to sing the theme song from “Lion King” and who can blame them? This is one of those “circle of life” “beginning of the world” moments. But the singing dissolves after a few lines. I want to think that, for this moment, reality and not Disney has won out. 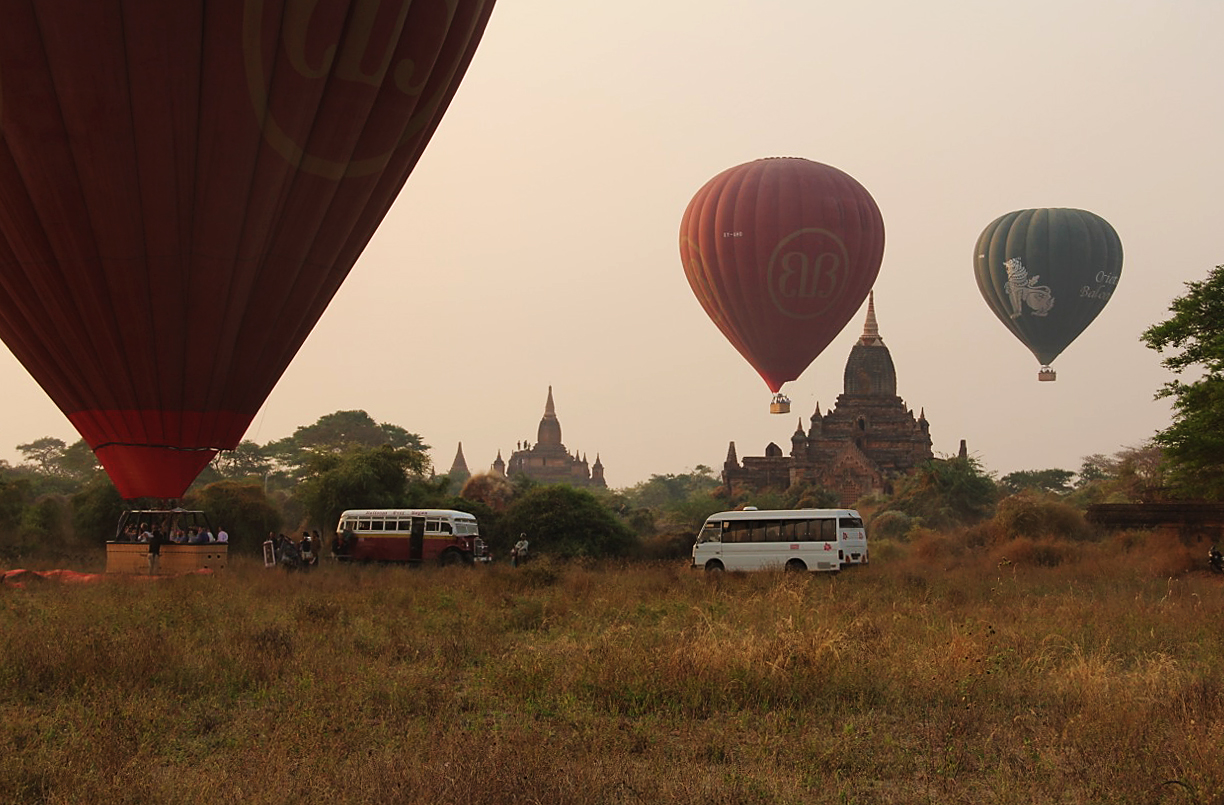 Tourists pay $350 for a 40-minute balloon ride at sunrise over the temples and pagodas in Bagan. Photo by Mary Jo Brooks/PBS NewsHour

Will “Disney” win in the end? Some scholars worry that Bagan will be turned into a kind of theme park. Or that it will be “loved to death,” as has been the fate of some other great archaeological sites. Those concerns are being raised as this country begins, however tentatively, to open up. Bagan is clearly being discovered and the crowds are coming. It’s not hard to imagine, standing here, a day when there will be traffic jams on the roads and on the pagodas themselves. Managing change means many things here in Myanmar, certainly political reform and equity for ethnic groups top the list. But here in Bagan is another challenge.

Left: The sun rises over the ancient city of Bagan and its Buddhist temples and pagodas. Photo by Mary Jo Brooks/PBS NewsHour