After Years of Economic Hardship in Eagle, Colo.: Resignation 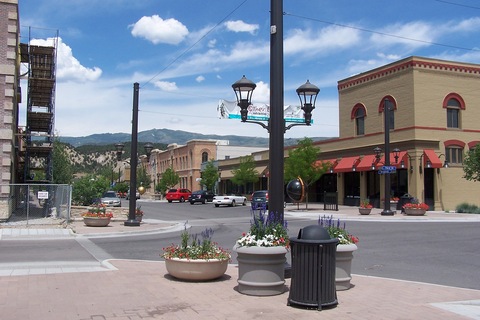 EAGLE, Colo. | The last few years have given people in this Rocky Mountain town good reason to be angry. While no community has escaped the toll of the great recession, Eagle has seen a fundamental change in its daily life.

The city, a Boom Town that saw its population and housing market skyrocket in the early years of the last decade, is dealing with a painful foreclosure problem. Large parts of its population, involved in he construction trade, have seen their incomes collapse with their home values.

Patchwork Nation has spent a fair amount of time in Eagle, coming here with the NewsHour back in 2009 and with the Christian Science Monitor in 2010. And in those trips, there has been head-shaking and fist-shaking. There have been exasperated “what nows?” from the residents.

But in May of 2011, a different feeling seems to have taken root: resignation.

After years of struggle, people in Eagle are not overly optimistic about where things are headed, but there is a sense that a new normal is arriving and anger has given way to acceptance.

A Symbol of Something Larger

The story of Eagle, and surrounding Eagle County, which we have been watching since 2008, is common to many Patchwork Nation Boom Town communities.

As its population doubled in the last decade, construction became the driving force in the community. And as construction boomed, workers took their money and plowed it into new homes. Then the music stopped and many found themselves “upside down” in their homes — without the income to afford their mortgage payments or ability to sell and pay off their bank notes.

How fast did it all change? The county built a bigger prison to hold detainees from its growing population, but by the time the prison was built, declining tax revenues meant the county sheriff’s office couldn’t afford to staff the guards for it, said Sheriff Joe Hoy.

The problem was helped by the fact that many workers who had come to town to make money in the construction boom simply left. Some walked away from bad mortgages, a practice that has become more common here.

And, through it all, voter anger grew.

Candidate Barack Obama won Eagle County with 61 percent of the vote in 2008, but Eagle and Eagle County felt a lot like other disenchanted communities last year. A local Tea Party group blossomed and took control of the local Republican Party and Hoy, a moderate Republican, found himself challenged by one of his own deputies who was urged on to run by the local GOP.


Republicans did well here in 2010. The congressional vote was evenly split and upstart conservative candidates almost managed to unseat Hoy.

The problems haven’t gone away in Eagle in 2011. There are still scores of properties in some state of foreclosure in this small town. Hundreds are for sale. One local acupuncturist says her income is off some 40 percent from what it was.

But a lot of the anger has dissipated, at least for now, says Matthew Hanson, general manager of the Gypsum Greek Golf Course. Hanson spends a lot of time talking to members and hearing their concerns.

“The attitude of people here is, ‘I want to stop talking about the economy. It’s like we’ve almost become resigned to the fact that this is the economy we have now,” he says. “Lifestyles have adjusted.”

Kathy Heicher, the former editor of the local paper, says people are simply making do with what they have. Her new neighbor is a friend who walked away from their home when the neighbor’s husband lost his job. “They couldn’t afford the house anymore, but they decided they wanted to stay in Eagle. They like the life here. So they live near me in a smaller place now. They seem to like it.”

Why? The big story in Eagle, it seems, is the economic bleeding has stopped. The downtown is still full of vacancies, but not more than last year. And foreclosures in Eagle County in April were down 91 percent from April 2010.

By historical standards, these are hardly high times in Eagle, but compared to the past two years, they at least feel stable and that, to many here, feels like progress.

And that is something to keep in mind for 2012.

But the current mood in Eagle may be telling. After some very hard years the measure of improvement for voters may not be what unemployment was in 2008 or some random number assigned by analysts, but simple improvement or something else. “People here aren’t angry anymore as much as they want answers,” Hanson said.

Candidates, in other words, may have to give voters a reason to choose them beyond frustration. They will need to offer solutions. And unlike anger, solutions are not easy to find.