In the age of streaming music, just how much is a listen worth?

Enter the age of streaming music. In 2014 alone, Americans streamed 164 million songs through a variety of streaming services including Spotify, Pandora and Google Play Music. In the past few months, questions have been raised about how much artists are being paid from these services and whether it’s a fair amount for their music. The issue came to the forefront in November when Taylor Swift, one the music industry’s largest stars, pulled her entire catalog from Spotify. A few other artists have pulled their music and some have never allowed their music on streaming services.

The fallout over how much artists and songwriters are being paid by streaming services comes while physical album sales and permanent digital sales are falling at rapid rates. So while the amount artists are making from streaming is less than a traditional amount, streaming services will argue it’s a solution to not being paid at all. With the introduction of Napster fifteen years ago, consumers began to share music mp3s with one another and before long you could find almost any song you wanted in a free, digital form.

Paying for a single listen of a song that the consumer does not own is a new business model, so how do you quantify that? Ken Parks, Chief Content Officer at Spotify, says it’s not just about paying per listen of a song. It’s about what exposing a consumer to the music is worth and the value of getting them to pay for music again.

“So we are compensating artists every single time a song gets played. How much is a listen worth in the world? Well it’s worth a lot if you can get someone to start spending a hundred dollars a year on music when they weren’t spending anything before,” Parks told the NewsHour. “So it’s not so much a question of how much are you making per listen. Nobody really knows how much a listen is worth. What we do know is historically people did not buy much music and if we can get millions of them to start spending $120 a year then this music business can be bigger than it ever was.”

About 25 percent of all Spotify users currently pay for the subscription. But how does $120 a year from a subscriber who is streaming music compare to album sales for an artist? 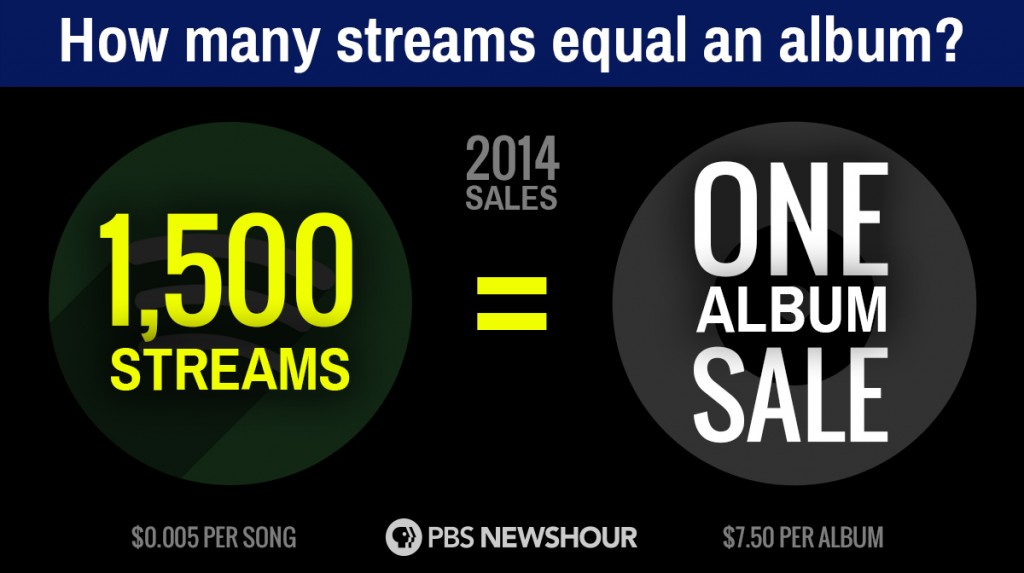 In 2013 it took 2,000 streams to equal an album sale. This is far less than artists used to make from an album, but with the sale of physical CDs and even permanent digital downloads plummeting, streaming services are actually the only part of the music industry seeing revenue growth. From 2013 to 2014 streaming services have grown by 54 percent. 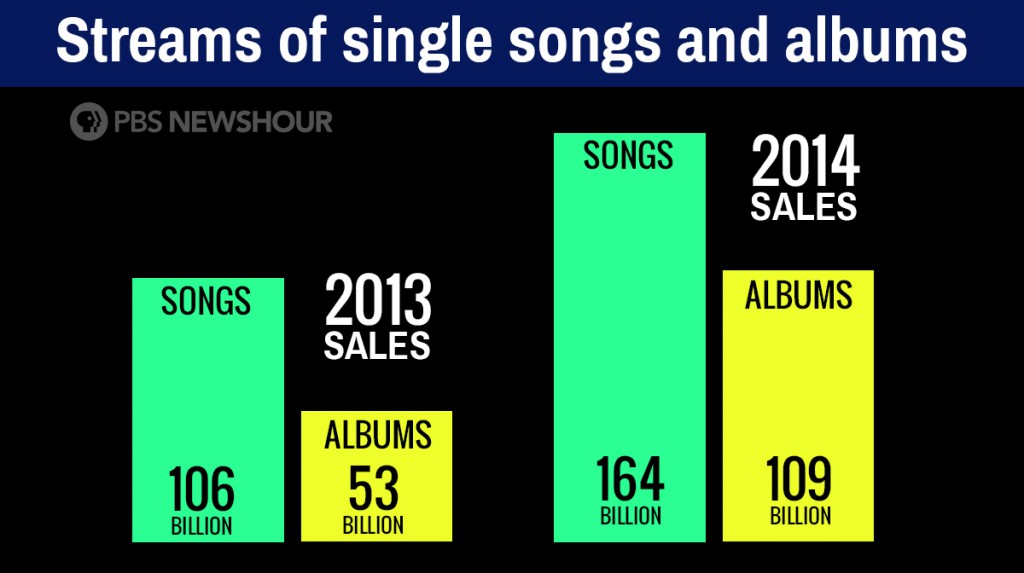 In responding to criticism that streaming services have not been transparent about how or how much artists and songwriters are being paid, Spotify released their royalty payouts for July 2013 as well as a breakdown of how they calculate payouts. They didn’t name the albums, but instead titled the albums by genre and size.

A “global hit album” made $425,000 from Spotify in the first month it was released. In that same month it probably sold hundreds of thousands of digital and physical copies which would have made millions of dollars. It’s easy to look at those numbers and think streaming holds very little benefit for artists. Wouldn’t the fans who streamed a global hit album have bought a copy instead if streaming had not been an option? The alternative to streaming isn’t necessarily purchasing, it could be piracy.

“You ask any 15-year-old just about on the globe, and they’ll tell you that they know how to get music for free. That hasn’t changed,” said Parks. “What also hasn’t changed is that people love music, it’s something that’s fundamental to our species. So it hasn’t been a hard sell to convince millions of people in this market either that they should start paying for music and that Spotify is a really cool experience.”

Also, selling an album is a finite sale — that’s $8 to $12 and that’s all that consumer will spend on the album. Streaming will go on and if your music remains popular, it will continue to make money. Currently, individual tracks from a global hit album released in 2013 have more than 100 million streams, so Spotify has presumably paid out millions for that album.

Watch more on tonight’s PBS NewsHour. Hari Sreenivasan takes a look at the emerging business model of streaming music as a part of a new series, “Music on Demand.”

Left: With new business models for selling music, like streaming service Spotify, are the days of traditional album sales coming to an end? Photo by Dado Ruvic/Reuters