‘And If Elected I’ll Fix the Housing Market’ … Probably Not 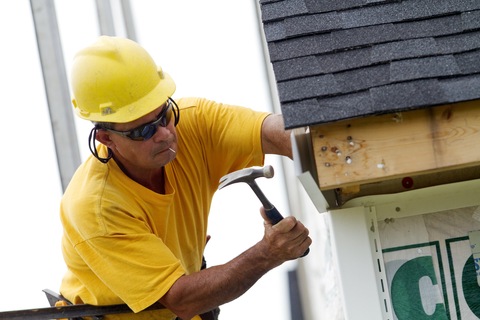 A carpenter installs vinyl siding for a new home under construction in Raleigh, N.C., in May. Photo by Jim R. Bounds/Bloomberg via Getty.

As the economic troubles that began with the last recession drag on and on, the drop in housing prices and construction is, correctly, labeled as a key problem. And it is big topic among 2012 presidential hopefuls.

On Monday, Rep. Michele Bachmann told the crowd assembled in Iowa for her candidacy announcement: “We can’t afford four more years of a housing crisis that is devaluing our homes and making home ownership impossible for many Americans.”

That’s a sentiment to which all Americans would surely nod their heads. People losing value in their homes often can’t sell because of the loss they would take. They feel less economically secure and less likely to spend money elsewhere in the economy. And less moving and fewer home sales ultimately means less home building.

Without question, a real problem. But as Patchwork Nation sees it, the only serious solution to it is time — and in some places a lot of time.

Last week, we wrote “A Skeptic’s Guide to the 2012 Debate Over Manufacturing Job Losses,” and noted that despite what any candidate says about that sector of the economy any turnaround will be a slog. Today we turn a skeptical eye what will surely be another critical part of the 2012 election cycle: the debate over fixing the housing market.

Not a Recession, a Depression

If you want to understand just what happened to the housing market, look at the number of residential building permits in 2006 (when times were good) and 2010. The market went off a cliff. The U.S. economy may have hit a very bad recession, but in the housing market it was a depression.

In 2006, there were permits issued for more than 1.8 million housing units – everything from single-family homes to units in apartment buildings. In 2010, that number had dropped to about 600,000. And the value of those permitted projects fell from $290 billion to about $100 billion.

That’s almost $200 billion of lost spending and, as we have seen in our Patchwork Nation communities, that loss had massive ripple effects.

As people who worked in construction watched their incomes dry up, whole towns and communities were affected. People who bought homes when times were good found themselves “underwater” – owing more on their mortgages than their homes are worth. Many lost their homes to foreclosure.

This is still the state of the market today, years after the collapse, which is why everyone is so eager for a turnaround — and politicians are so eager to promise one. But that might be a very hard promise to keep, especially in some communities.

On one level, the housing collapse looks very uniform. About two-thirds or more of the construction work and money disappeared in most of 12 county types between 2006 and 2010. But percentages can be deceiving.

Consider, the fates of the wealthy Monied Burbs and the formerly growing Boom Towns in 2006 and 2010. Both saw losses of more than 60 percent in terms of housing units and the value of those units.

The drop in the Burbs wasn’t as sharp in real terms. The value of construction projects fell, but by less than $40 billion ($62 billion in 2006 and $23 billion in 2010). And remember those communities have more wealth in them generally. That lighter reliance on construction plus higher incomes means they will likely recover sooner.

In the Boom Towns, in other words, the collapse of construction is about more than just lost money. It is about lost jobs and lost livelihoods.

In Eagle County, Colo., a Boom Town we have visited regularly since 2008, the drop in projects between 2006 and 2010 was an astounding 90 percent. The drop there has led people to reexamine what they will do with their lives and has changed the economic future of the area.

And the housing prognosis in other Boom Town counties doesn’t look great so far in 2011.

Clark County, Nev., home of Las Vegas, is actually down in building permits through May as compared to the same period in 2010. In Riverside County, Calif., another Boom Town hit hard in the recession, things are better, but barely. There have been permits for 51 units through May compared to 30 through May 2010. Those aren’t the kind of numbers that are going to bring a market back.

And, the truth is, that shouldn’t surprise anyone. The housing bust has been so hard because the boom was so great – and those problems are emphasized in places built on construction. Those high numbers in 2006 came after big numbers in 2002, 2003, 2004 and 2005. In fact residential construction went up every year from 2000 (1.5 million new units) to 2005 (2 million new units).

The housing bust, as much as everyone hates it, was the result of too much building, coupled with too many people buying who shouldn’t have bought — so-called sub-prime borrowers. The foreclosure crisis and the collapse of construction were necessary and we are left with the detritus — a massive number of bank-owned properties that must be sold before construction begins in earnest again.

In short, you are welcome to hate the current housing mess, but you will not find a magic wand to make it go away and any politician who says otherwise is fooling themselves — or trying to fool voters.

Proposals to eliminate semi-governmental mortgage giants Fannie Mae and Freddie Mac won’t help the current situation. Scrapping them may prevent another bubble in the long-term, but in the short-term it might even slow a housing recovery by making it harder to acquire mortgages.

So if there’s little the government can do, when will the market turn around? That’s the guessing game right now.

Rick Sharga, a senior vice president at RealtyTrac, which monitors foreclosures, says he doesn’t expect the market to be back near anything normal until 2014. This week at a Christian Science Monitor breakfast, Mark Zandi, chief economist of Moody’s Analytics, said he sees things improving markedly in 2012.

But of course the turnaround, whenever it comes, won’t be the same everywhere. Places not so heavily reliant on construction — like the Monied Burbs of the big-city Industrial Metropolis counties — may come back soon, but other places face a much tougher road.

And some may not be the same for years. No matter what a candidate promises you.