Question: Maybe it’s my background as a college instructor (and union member), but Paul Solman’s tone in his inquiry into GM workers’ wages raised my hackles. It may be that the intent was didactic — to instruct viewers about current business issues as they apply to the auto industry. Nonetheless, the attitude was reminiscent of all-too-common talking points from the current political/corporate/media elite that somehow American workers are “overpaid.”

Why is $27 per hour considered a lavish wage? We rarely hear such complaints about the astronomical salaries of hedge fund managers or bank CEOs who contribute little to the real economy, and have been mostly to blame for the recent economic collapse.

Arguably, an autoworker creates something of greater value to society than does a trader dealing with questionable derivatives — or for that matter, than does a TV news journalist. In the worship of race-to-the-bottom globalization, we should remember that poor workers will not consume and will not spend. If big business and misguided politicians continue their war on American workers, we will devolve from a once-prosperous democracy into a 21st century feudal state.

Paul Solman: I see my role as a proxy for our viewers, Alex. I try to ask the toughest questions, as clearly and forcefully as I can. I’ve done many stories on manufacturing, workers and wages. I can assure you, quite a few viewers think $27 an hour is a lavish wage at a company bailed out by the American taxpayer (i.e., the viewers) — for a job that millions of their unemployed fellow Americans would jump at the chance to do. Even for half of $27 an hour. The wage now being offered to new UAW workers is $14 an hour. When I asked GM President Mark Reuss how many applicants GM had at that wage, he said, “We had a lot.” 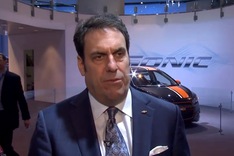 Personally, I do not consider $27 an hour “lavish.” Not even close. But I try to keep such value judgments out of my reporting, as best I’m able. I’ll do pretty much anything to get a sharp response out of an interviewee, however. Please don’t mistake one for the other.