There are substantial differences in the credit card offers that banks extend to different potential customers. Less sophisticated borrowers receive offers with more back-loaded and hidden features, as well as more upfront rewards, visual distractions and fine print at the end of the offer letter, according to Hong Ru and Antoinette Schoar in their new study, “Do Credit Card Companies Screen for Behavioral Biases?” Banks also ratchet up these hidden features when their cost of funding increases and when the credit risk of consumers is lower, which reduces the risk for the banks that customers default once they are hit with the unexpected charges. In addition, hidden fees go up when state unemployment insurance benefits become more generous.

Lenders can only charge late fees if borrowers miss payments. Prior research on credit card use suggests that the borrowers most likely to miss payments — less educated or “unsophisticated” consumers who are less adept at predicting their future financial needs and behavior — are the least likely to read fine print and fully understand the terms of the credit agreements they take on. These consumers are also most readily attracted by colorful pictures and typographical gymnastics.

Drawing upon a dataset gathered by Compremedia of almost 1 million credit card offers mailed to U.S. households between 1999 and 2011, the researchers extracted “hard” information about the offers, such as annual percentage rates (APRs), fees and reward programs, as well as “soft” information, such as use of photos, color, font size and whether information about an offer was provided at the beginning or the end of the letter. They investigated the correlations between these features of the offers and recipients’ educational attainment and income. 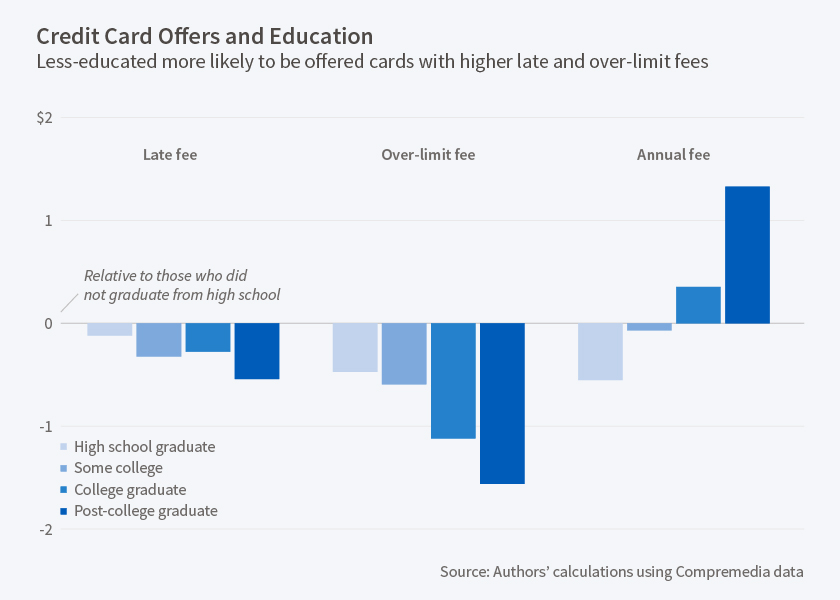 They find that less educated households were offered higher late fees, overlimit fees and default penalty rates, as well as more upfront inducements, such as low introductory APRs, cash back and waivers of annual fees. In contrast, more highly educated households were offered cards with front-loaded features such as stable regular purchasing APRs and low late fees and overlimit fees. Back-loaded characteristics tended to be bundled together and to be paired with rewards programs such as low introductory APRs, cash back or points. Sophisticated customers were offered these rewards less often; instead, they tended to be offered participation in airline miles programs.

They find that less educated households were offered higher late fees, overlimit fees and default penalty rates, as well as more upfront inducements, such as low introductory APRs, cash back and waivers of annual fees.

The researchers also found that when the federal funds rate — the bank’s cost of funding — rose, the late and overlimit fees in unsophisticated customers’ offers also rose, suggesting that banks were using these features to pass funding costs to these customers. In offers to sophisticated customers, federal funds rate increases were associated with increases in regular APRs and annual fees and with decreases in late fees and overlimit fees.

Not surprisingly, banks appear to monitor the likelihood that unsophisticated customers will default on their debts and incorporate these probabilities into their card offers. The researchers found that when a state’s unemployment insurance benefits increased, providing borrowers with smoother cash flow in the event of job loss, banks issued potential borrowers within that state more offers with reward programs, late fees and default penalties, and they increased the number of colors in offer letters and moved the back-loaded features to the end of the letter. “Taken together, these results suggest that credit card companies realize that there is an inherent trade-off in the use of back-loaded features in credit card offers: They might induce customers to take on more (expensive) credit, but at the same time, they expose the lender to greater risk if those consumers do not anticipate the true cost of credit.” In other words, card companies seem to weigh the amount of fees they can extract from less sophisticated borrowers without increasing their likelihood of default.