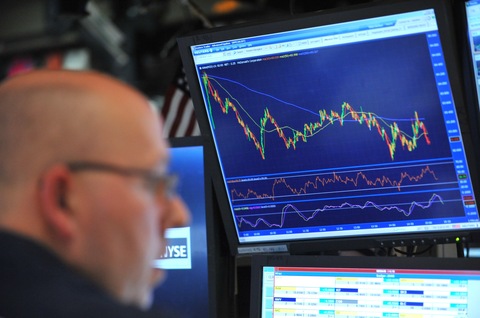 The Dow may have risen nearly 170 points Thursday, but don’t expect it to stay that way, argues Terry Burnham. Photo courtesy of Stan Honda/AFP via Getty Images.

But as I wrote here recently, he may be better known to PBS NewsHour viewers from his appearances in stories on the dot.com crash, evolution and economics and the neuroscience of economics. Or to NewsHour readers for his grim much-read post here on “The Stockholm Syndrome and Printing Money” a few weeks ago in which he foresaw a market crash.

Recently on the Making Sen$e Business Desk, the estimable business writer Charles Morris predicted a new economic boom due to cheap energy. Now, as Ben Bernanke again reassures investors that he won’t stop pumping money into the economy, and the stock market soars seemingly in response, Terence Burnham counters with his dark vision of a spectacular economic bust. He says our lizard brains are again getting the best of us and argues that Fed intervention makes another crash even more likely — a prediction I’ve been asking him to elaborate here for quite some time.

Terence Burnham: I believe the stock market is about to have a devastating decline. To make a concrete prediction, we will see Dow 5,000 before we see Dow 20,000.

This prediction is exactly the opposite of conventional wisdom. Jeremy Siegel, author of “Stocks for the Long Run,” is predicting new all-time highs for stocks, while Warren Buffett, the best investor of the previous century, is 100 percent behind stocks.

The signs of collapse are right in front of us. We cannot see the signs now, however, because our brains aren’t built to seem them. As I have written in “Mean Markets and Lizard Brains” and explained to NewsHour economics correspondent Paul Solman on the program, we are more often than not at the mercy of “lizard brains,” which evolved in, yes, lizards, to drive them to eat, survive and reproduce.

These lizard brains lead us to buy stocks after they have gone up and blind us to the obvious realities.

As I put it on the NewsHour, your lizard brain is built to find and act on patterns. So the lizard brain, by its very nature, seeks to replicate things that have worked before. If you threw a spear a certain way and you got food, guess how you’re going to try to throw it the next time? The same way.

The same algorithm applies to stocks. The stock that you fall in love with has four up days in a row. It must be a good stock, right? There must be some reason it’s gone up four days in a row. People are excited about it. They buy it. You buy it. The buying drives it higher — a self-fulfilling prophecy.

And the same thing happens in reverse. A stock plummets; There must be something wrong with it. The lower it goes, the more you hate it and the faster you get rid of it. As a result, you sell it at the low. This process pushes us to buy high and sell low, exactly the opposite of what any investor knows is the right thing to do: buy low and sell high.

And what applies to individual stocks applies to the stock market as a whole. Here is a chart that makes the point graphically. 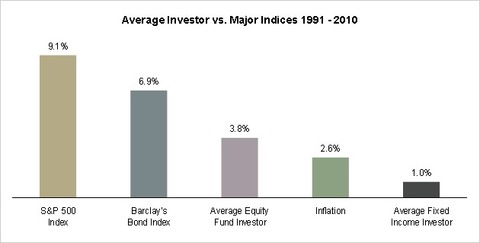 Twenty-year survey conducted by Dalbar Market Research. Another of their more recent studies can be found here.

Over the two decades that ended in 2010, stocks returned 9.1 percent; bonds, 6.9 percent. Yet the average investor in stocks earned a measly 3.8 percent annual return, barely beating inflation (2.6 percent a year). The average “fixed income” investors, or those who invest in bonds, earned one percent less than inflation. The obvious explanation: investors consistently got in and out of both the stock and bond markets at the wrong time.

In other words, the recent stock market boom — and the bond market boom as well — prompts rationalists like me to think, “the lizard brains have been buying high again.”

But I’m not predicting a Dow of 5,000 just because it hit 15,000 so rapidly. I’ve been saying since well before the Crash of ’08 that the U.S. economy was headed for disaster. Here, then, are three rational economic reasons I think we should all be terrified.

Americans should be saving close to 50 percent of our income. Instead, we are saving zero percent.

As we inevitably move back toward higher savings rates, we will enter into a negative feedback loop. More saving means less spending, by definition, and lower spending will lead to less income, which will in turn lead to more layoffs, even less income, and so it goes.

Why should we be saving so much more than we are? First, we have saved too little for too long. The median person approaching retirement has approximately $100,000 saved. As Paul has pointed out repeatedly, and most recently in the NewsHour online retirement page “New Adventures for Older Workers,” that is far too little, especially given the rates of return the stock and bond markets both suggest given their high valuations. In fact, the Treasury Inflation-Protected Securities (U.S. TIPS) that Boston University economist Zvi Bodie and Paul Solman have so long written about on the Making Sen$e Business Desk are actually suggesting negative returns in the future.

My personal suggestion is that people assume zero return on investments. That’s right: zero percent. While this could be too pessimistic, it could also be too optimistic if markets tumble, as I expect them to, following the pattern of a few weeks ago. (I’m not predicting that this is the beginning of the end however — though I suppose it could be — just that we’ll see Dow 5,000 sooner than we’ll see Dow 20,000 — a lot sooner.)

Over the last two decades or so, savings rates have ranged from single digits to slightly negative. In rough terms, zero percent. So as a nation, we have essentially no savings and face very low future returns. The inference is simple: We will need to increase savings drastically. See my point about a negative feedback loop above.

Government policies have been making the problems worse, not better.

The next time someone tells you that the Fed is going to save the economy, ask that person if the Easter Bunny will also play a role.

The Fed has been keeping interest rates at rock bottom lows to supposedly stimulate the economy. But unemployment remains extremely high. As David Stockman pointed out on this page recently, the low rates have fueled speculative markets, not real economic growth.

The idea that the Fed can save the economy is simply ridiculous. Yogi Berra’s diet famously included pizzas cut into fewer slices. Instead of eating two slices out of an eight-slice pizza, he would trim down by eating one slice of a pizza sliced into fourths.

Believing that Federal Reserve Chairman Ben Bernanke is going to save us is pure fantasy. Wrapping it up with New York Times columnist Paul Krugman’s Nobel Prize does not make it real.

Over the past few weeks, markets have seemed to react — violently — to Bernanke’s pronouncement that the Fed’s long experiment with wanton money creation may be coming to an end. It suggests that many investors may have bought into the delusion. But ask yourself this: How real can economic growth be if it depends solely on faith in the printing of money?

What about fiscal policy? Can we deficit spend our way to prosperity? This is also ridiculous. Our problem is that we have overspent. If you had a problem of drinking 50 cups of coffee a day, would the solution be to drink 80 cups a day for a while? Not only have Americans saved far too little, we all now have a much bigger portion of the government debt to pay in the form of higher taxes and lower Social Security and Medicare benefits somewhere down the line.

Remember, the Easter Bunny cannot save you, nor can Ben Bernanke’s printing press.

As noted above, the vast majority of individuals are absolutely horrible at market timing. Investors tend to get scared in declines and excited in rallies. They buy high and sell low. In early 2009, for example, when stocks were the best buy in decades, individuals were selling stocks in record amounts. Only after stocks had doubled did individuals begin buying stocks again. Just in time, I predict, for investors to get slaughtered again.

Conventional wisdom is to buy and hold stocks. In this case it is wisdom because people have almost always been — and will be — rewarded for hanging tight. However, lizard brain wisdom says individuals should only own stocks when the expected returns are extraordinarily high. In normal or negative times, individuals will not be able to capture equity market returns.

Most people should not own stocks today — none. Yet individuals have been getting back into the stock market with a vengeance, and they have far more of their meager savings in stocks than they should.

Here is my prediction.

Stocks will decline — and may have already begun to. This will frighten investors and cause them to sell and to spend less. This in turn will cause further stock market declines. At some point, a full panic will ensue with enormous moves in the stock market. Look for a 1,000-point down day in the Dow Jones Industrial Average, though June 20’s 353-point loss was not unimpressive. I repeat, however: I’m not predicting what will happen today, or in the next week or month. I don’t pretend to know the timing. I only think that I see the inevitable.

Am I taking a risk in making such a dire forecast? Yes. I could be stuck with the label “Mr. Dow 5,000” just as James Glassman and Kevin Hassett, the authors of the 1999 book “Dow 36,000,” have had to live with their egregious mistake.

In another sense, I embrace the title “Mr. Dow 5,000.” If the decline does not happen, everything I have learned in my life as an economist and investor is not true. I will be devastated, regardless of whether I make my views public or cower in private.

Paul Solman: Over the weekend at zerohedge.com, the gloomiest of all gloomsters, “Tyler Durden,” published a post comparing the current stock market to the rally of 1928. The post bears a striking similarity to the one you’ve just read. It ends: “The risks that I’ve flagged in this article (and others) are the potential side effects to [Fed Chairman Ben Bernanke’s] depression-fighting remedies. And the 1920s experience suggests that these side effects could include, well, another depression.”