Mechs is a whale. More specifically, Mechs is the username of a well-known high roller whale on an online gambling website where there is nearly no limit on the size or frequency of bets. Last October, Mechs made a series of winning online wagers, culminating with a single all-or-nothing bet of a little more than $800,000. Mechs had a 96.2 percent chance of winning. Mechs lost.

But what really set Mechs’ game apart wasn’t the odds, but the currency. All of his bets were placed in Bitcoins. The wagers rolled instantly across the Internet in both directions, registered in Bitcoin’s public ledger, known as the blockchain. Mechs’ transactions were anonymous, but as public as a scoreboard at a high-school football game. While Mechs betted, other gamblers watched as his fortune drained away.

Bitcoin gambling has had a short, but explosive lifetime on the Internet. Satoshidice.com, the most widely-known gambling service, was founded in April 2012. In July 2013, the site’s founder, Erik Voorhees, sold it to an anonymous buyer for 126,315 bitcoins—equal to $12.4 million. That pile of Bitcoins is worth around $70 million today. By most estimates, more than half of global Bitcoin transactions are wagers on gambling sites. Just-Dice.com, where Mechs made his colossal bets, has handled more than $2 billion in wagers since it was founded in June 2013. All of this gambling happens in a currency that is largely unregulated, on websites set up on offshore servers, and right under the noses of officials who are unaware it exists. 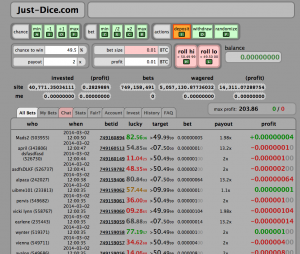 The minimalist interface of Just-dice.com, where gamblers have wagered more than $2 billion since it opened in July 2013.

Bitcoins have gained popularity in a relatively short period of time (as our Making Sen$e broadcast segment explained). The currency is growing and changing so fast, regulators are having a difficult time keeping up. Even Sen. Tom Carper, D-Del., who chaired last November’s Homeland Security Committee hearing on virtual currencies, admitted to the PBS NewsHour that he’d only learned about Bitcoin six months before. His only knowledge of virtual money had come from his teenage son’s World of Warcraft habit. Carper had heard of Bitcoins being gambled, but said “we talked about a lot of uses of virtual currency yesterday, and I don’t recall gambling ever coming up in a two-and-a-half hour hearing.”

By most accounts, gambling represents between 50 and 60 percent of all Bitcoin transactions.

Transaction costs are extremely low, meaning it doesn’t cost a lot to send and receive coins. Transactions are also irreversible. Once you send Bitcoins to someone else, you can’t request them back in exchange for returning the service or good you purchased. For gambling operators, this irreversibility eliminates the risk of chargeback fraud.

The benefits of doing business in Bitcoins have been a boon for 34-year-old professional poker player Bryan Micon, the chairman of Bitcoin poker site SealsWithClubs.eu. The site, Micon estimates, has done about 20,000 transactions over its 2.5 year existence, and paid about $20 in transaction fees.

Bettors like Bitcoin because they receive their winnings right away. There are no bank wires or deposits to wait on because Bitcoin is itself a payment processor.

And in the same way the Internet breaks down international boundaries, the uniformity of Bitcoin enables international gambling without the hassles of currency exchanges.

Bitcoin gambling sites also take a lower cut of the winnings than a Las Vegas Casino would, said Satoshidice founder Erik Voorhees, in an email. SatoshiDice’s house edge is about 1.9 percent. Just-Dice is only 1 percent. “A Vegas casino game might have a house edge of 10%,” Voorhees said. “This means that if you’re going to gamble, it’s far smarter to play SatoshiDICE than a Vegas casino.”

Central to Bitcoin’s success is this apparent contradiction: all transactions are at once anonymous and transparent. Every transaction and its size is listed in a public ledger, while the parties involved remain anonymous. When it comes to gaming, Voorhees said, that transparency allows all players to verify that each bet is fair. Because of Bitcoin’s mathematical algorithm, there’s no way for the house to cheat, he explained.

“This is absolutely revolutionary, and isn’t being done by any billion dollar casino in Vegas,” Voorhees said.

But with all gambling, players have to trust that the operators won’t steal the money they put down, which seems particularly risky with anonymously run sites. The immediacy of transacting Bitcoins minimizes that risk. And for the gambling operators, not holding players’ money for long periods of time allows them to more easily skirt gambling laws that crack down on payment processing. 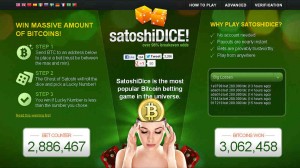 The SatoshiDice site as it appeared in early 2013. The site has since changed after being sold to an anonymous new owner.

SatoshiDice, Voorhees’ Bitcoin casino game, was the first, and for a long time, the most popular Bitcoin gambling site. The game is simple. The “Ghost of Satoshi” rolls the dice to select a number. If the “lucky number” is less than your chosen number, you win. (“Satoshi” refers to Satoshi Nakamoto, the anonymous person or group who circulated the whitepaper floating the “peer-to-peer electronic cash system” that gave birth to Bitcoin.)

But is it legal?

In May 2013, SatoshiDice, whose servers are overseas, announced that the site would be blocking IP addresses from the United States.

The move was not, SatoshiDice claimed, in response to any official investigation, but rather a “proactive measure” to minimize risk. U.S. courts have been unclear about the definition of Internet gambling, and the ambiguity has been enough to spook the sites.

Voorhees sold SatoshiDice because he said running a Bitcoin gambling site made him a target. “I needed to separate myself from it before it put me in the crosshairs of the U.S. government.”

“Bitcoiners” are generally wary of the U.S. government–their aversion to a centralized monetary system is typically what draws them to Bitcoin in the first place. But avoiding any legal grey area is a smart move, said Whittier Law School professor Nelson Rose, who’s consulted for the gaming industry and taught classes about gaming to the FBI.

There are no signs the federal government is cracking down on Bitcoin gambling, Mercatus Center senior fellow Jerry Brito, who testified before the senate, told the PBS NewsHour.

But that doesn’t mean it’s legal – or does it? You’ll be sorry you asked.

Even though online gambling carries an illicit perception, there is no consensus on its legality within the United States. Gambling in general, Rose explained, has always been a state issue, and almost all federal statutes require that gambling be a violation of state law for the feds to take action. Half of states have laws against making a bet, but many of these laws haven’t been updated in the era of online gambling, let alone Bitcoin gambling.

Complicating the state-by-state laws are subjective assessments of whether a game involves “betting” or “gambling” and whether it’s a “game of chance” or “game of skill.” In only three states–New Jersey, Delaware and Nevada–gambling on games of chance (which includes Poker) is legal, as is online gambling.

But even those states haven’t updated their laws to include the possibility of betting with digital currency. A.G. Burnett, the chairman of the Nevada State Gaming Control Board, told us that the state doesn’t allow gambling with Bitcoins. “Unless it’s expressly allowed,” he said, “it simply can’t happen.” But the laws don’t say you can’t gamble with Bitcoin either. The state’s gaming regulations make no mention of digital currency at all. “The laws don’t contemplate it,” he said, “and we’re not interested in changing that.”

Of course, the laws Burnett was talking about regulate official operators; they have no oversight over people wagering with Bitcoin on their own computers in the middle of the night. Asked whether that was happening, Burnett said, “I have no idea.”

At the federal level, the legislation that does exist isn’t very strong. The laws focus on the gambling operators, not the bettors. The Unlawful Internet Gambling Enforcement Act (UIGEA), for example, can only go after gambling businesses who are already doing something illegal. It’s a toothless law, Rose and fellow gaming law expert Dr. Joseph Kelly agreed. The bill squeaked through Congress at 2 a.m. attached to an anti-terrorism bill.

The Wire Act used to be the federal government’s most powerful weapon against online gambling, but two years ago, the Department of Justice loosened the law by limiting its application to online sports betting.

What has been used at the federal level to crack down on online gambling (in the Black Friday crackdown on poker sites, for example) is the Illegal Gambling Business Act. It’s a relic of the Organized Crime Control Act of the 1970s, but here again, U.S. attorneys can only go after operators big enough to be violating interstate commerce regulations.

The clearest anti-gambling laws regulate payment processors (like credit card companies and banks) that would funnel winnings from the operators to the bettors. But Bitcoin is a decentralized payment processing system. So there’s no person or organization to prosecute.

And even if Bitcoin could be regulated, Bitcoin–or the various organizations that speak for it–could argue, Rose said, that they’re just like the U.S. Treasury–separate from the activities people use Bitcoins for.

Of course, how the feds interpret Bitcoin gambling depends on what Bitcoin actually is. A currency? A commodity? A payment system? “If it’s not money, it’s not gambling,” said Rose. No one is sure, and November’s senate hearings didn’t come any closer toward settling the matter.

Days after the Japanese Bitcoin exchange Mt. Gox collapsed, taking many people’s coins with it, Federal Reserve chair Janet Yellen said last week that the Fed doesn’t have any authority to regulate the coin.

For now, Bitcoin gamblers are free to keep rolling the die – even in the U.S., where porous blockage from dice sites is hardly enough to restrict tech-savvy bettors in the mood to win a Bitcoin — or lose $550.

This story was updated to correct the spelling of Mr. Voorhees’ name.

Left: What's the biggest gambling operation you've never heard of? Bitcoin gambling represents about half of all transactions of the digital currency, yet the phenomenon is not on the radar of lawmakers or law enforcement. Illustration by Getty Images.