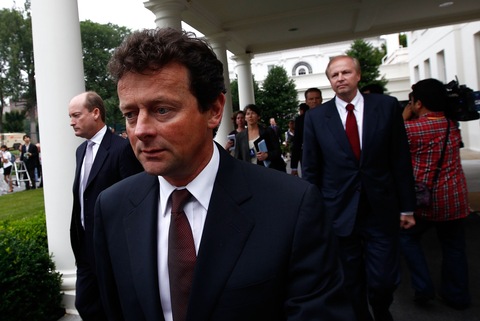 After days of speculation, BP made it official early Tuesday: embattled CEO Tony Hayward will step down from his post and be replaced by American Robert Dudley on Oct. 1. The news comes as the company, which is still working to permanently fix a leaking wellhead in the Gulf of Mexico, reported a record quarterly loss of $17 billion.

BP also plans to sell off some $30 billion in assets, primarily oil and gas fields, over the next 18 months to shore up its finances. The company set aside $32.2 billion to cover costs related to the Gulf oil disaster.

“The tragedy of the Macondo well explosion and subsequent environmental damage has been a watershed incident. BP remains a strong business with fine assets, excellent people and a vital role to play in meeting the world’s energy needs. But it will be a different company going forward, requiring fresh leadership supported by robust governance and a very engaged board.

As the spill in the Gulf dragged on, Hayward became the focus of public discontent over its handling.

The New York Daily News said Hayward was “the most hated — and clueless — man in America.” U.S. President Barack Obama said he would have fired Hayward, while White House Chief of Staff Rahm Emanuel said on ABC in June that “Tony Hayward isn’t going to have a second career in PR consulting.”

He will remain on BP’s board until Nov. 30 and is expected to retain a position with TNK-BP, the company’s joint Russian venture. Dudley is the BP executive currently running the company’s clean-up operation in the Gulf. Dudley will now be based in London and will hand over his present duties to Lamar McKay, head of BP America.

Hayward offered the following comment on his exit in the BP statement:

“The Gulf of Mexico explosion was a terrible tragedy for which – as the man in charge of BP when it happened – I will always feel a deep responsibility, regardless of where blame is ultimately found to lie.”

And the Guardian has more on Hayward’s exit, including his sizeable contract payoff — 1.045 million pounds or $1.6 million.

Analysts, pundits and reporters continue to pore through the volumes of documents on Afghanistan released by WikiLeaks via three major news organizations Sunday.

The New York Times reports on how the documents may impact the Obama adminsitration’s efforts to build support for the war.

The AP takes a closer look at the so-called “hit list” of enemy combatants.

The Atlantic looks at what analysts say the records signal about Pakistan: Is it an ally or an enemy?

And is this release akin to the publication of the famous Pentagon Papers in 1971 as WikiLeaks founder Julian Assange asserts? The Washington Post examines the differences and parallels.

On Monday’s NewsHour, reporter and Daily Beast contributor Philp Shenon explained who is behind WikiLeaks. And analysts Steve Coll and Philip Smucker took a closer look at what the records say about Pakistan, Afghanistan and the overall strategy in the region.