For today, not an answer, but a link — to a Washington Post graphic that’s sort of interactive (you get to move the cursor) and more than sort of informative. It compares four budget “plans” — including President Obama’s and the “House plan” — to current policy and shows how they vary, year by year, in terms of both annual deficits and cumulative national debt.

Two warnings: These are projections, subject to the vicissitudes of the national and global economies. If tax revenues collapse, as they did after the crash, the debt and deficit will be larger. If the economy rebounds robustly, just the opposite. Similarly with interest rates the Treasury has to pay on its bonds when it borrows money: If the longer-term rates drop, as they’ve done in the past few weeks, despite all the talk of the debt ceiling, then actual numbers will be lower than projected; if they rise, higher. 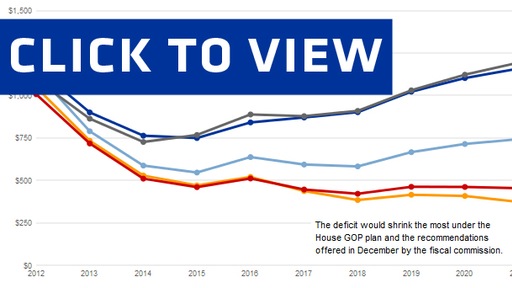 Second warning: neither this graphic, nor any other presentation of the data, no matter how accurate it turns out to be, can tell you the actual economic effects of the deficits and cumulative debt in the future. Remember, the supposed danger of continued deficits, adding up to a higher cumulative debt, is that the world will stop lending to us unless we hike the interest rate we’re offering. That in turn would lead to even bigger deficits, a higher interest rate still, and more total debt. Think Greece.

But suppose that, in the future, the world’s other major economies borrow even more, as a percentage of their GDPs, than the U.S. does. Suppose political unrest runs rampant. Might not the U.S. then be an even safer haven for global investors than it is now? Or, to put it another say, the least unsafe? That might mean we’d have to pay a lower interest rate in return for protecting their money.

U.S. economy grew at 33 percent rate in third quarter, but recovery is incomplete