We continue to reap responses to one of our favorite stories in some time -– on savings, self-control and what Sesame Street is trying to do about it. We’ve even followed up online with ‘Saving: Brought To You By the Letter ‘S” and ‘The Key To a Successful Life?’.

Those who saw the original story know its punchline: that self-control at age 3 predicts financial competence in adulthood. But what we haven’t yet shared is chief researcher Terrie Moffitt’s response to the following question: “Does this make you fatalistically depressed? Or tremendously encouraged because there’s something we can do about it?”

Here’s Professor Moffitt’s answer, preceded by a re-introduction to the basics of the study for those who could use a reminder, or a bit more elaboration. And as a bonus, we throw in a video outtake from our interview with Grover in which our line of inquiry became – how do I put this? – a little too sophisticated for a true blue six-year-old. 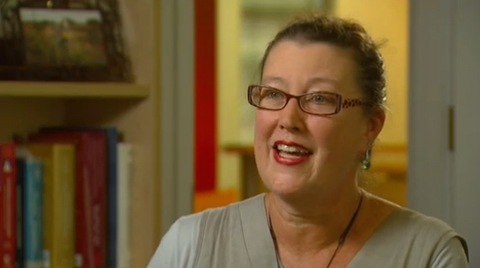 Paul Solman interviews researcher Terrie Moffitt about the link between self-control in three-year-olds and financial success later in life.

Paul Solman: What is the study?
Terrie Moffitt: The Dunedin Study began in 1972 with all the babies born in one city that year and those babies have been followed up every other year, brought into the clinic for a full day of assessments on their odd-number birthdays, and now they are in their late 30s so they’re the most studied cohort of children in the world.

PS: And what do you find with regard to self-control?
TM: With regard to self-control, we first assessed it when the children were three and continued to assess it as they were growing up. What we found is that now that they’ve reached their 30s those children with the lowest self-control have difficulty with financial health, that is they have difficulty with managing their money, they’re not saving for retirement, they’re in trouble with debt, they have difficulties with their physical health so they have already early indicators of being vulnerable to heart disease in mid-life, they’re overweight, they have high cholesterol, they have immune system abnormalities. So things that can be detected on medical tests.

PS: But does it correlate with their initial socio-economic status?
TM: In this research we have two big competitors for predicting adult outcomes. One was their social class in which they grew up for their family or origin, and the other one was their intelligence quotient. So we had measures of both of those things and we were able to rule them out and show that self-control is actually a very strong predictor of their outcomes, regardless of their intelligence or their social class of their family.

PS: How do you measure self-control in a three year-old?
TM: The children were brought into the clinic and they stayed for several hours and the staff observed them, and rated things such as low frustration tolerance, being not persistent toward a goal when they were given a task, needing constant supervision from an adult to keep them motivated, being restless, failing to pay attention, not planning ahead…

The staff just rated their behaviors on a simple checklist and it took about two minutes. The staff had never seen the child before so it’s really kind of a blind rating. Then we asked their mothers and their kindergarten teachers to fill out the same checklist and then any child who was rated as having self-control problems both in the clinic and at home and at school would be considered in our study to have self-control problems. Most kids get in trouble with self-control or lose their temper, or get off-task, or have trouble waiting from time to time and that’s perfectly normal but in our study we were able to say this is an across-the-board problem that this child has in many situations.

PS: And grading? From 1 to 100? Or is it like grading in a place like Duke now where it’s all between B+ and A?
TM: Well there are 1000 of these children and their scores on self-control as we measured it ranged from very low to very high and for the study we simply divided them into five groups, the lowest 200 in self-control, the highest 200 in self-control and then the other groups of 200 in the middle.

PS: And the correlation with bad financial outcomes was consistent across all five quintiles?
TM: Yes, the correlation follows a perfect gradient:  a beautiful line. With a steady increase in self-control in each of the five steps, there’s a steady increase in the financial health that the young person had reached in their 30s. What that suggests is that even a child who’s above average on self-control could improve their financial outcomes in mid-life if they improved their self-control skills early on.

PS: What does a critic of the study, of the self-control study say?
TM: The critic of this study would say that it is “observational,” meaning that we didn’t do an experiment and so we can’t say for sure that high self-control causes better financial outcomes in adulthood or low self-control leads to poor financial outcomes in a causal way. However, one of the things we were able to do was compare twins in which one member of the pair had very high self-control and one had very low self-control. These twins were of course the same age, they are the same sex, they have the same parents, they grow up in the same family and the same neighborhood and the same community. So everything else about them is the same. And what you see is that the child with the higher self-control had better outcomes and the child with the lower self-control had poorer outcomes despite the fact that they’re siblings and they’re growing up together and sharing everything else.

PS: There are two ways I react to this. One is to be completely fatalistic and say: Oh my God, it’s all in the genes. The kid who has low self-control is screwed, and the kid who has high self-control is blessed. Or to say: If you can provide me with evidence then this is the greatest news we’ve ever heard because we can help everybody by teaching them self-control at an early age. So which is it? Does this make you fatalistically depressed, or tremendously encouraged because there’s something we can do about it?
TM: It doesn’t make me depressed about the future of low self-control children. In fact it makes me very excited because we’ve now found something that’s malleable that can be changed that does influence midlife outcomes. So we’ve got a target and that means that all we need now is a program that works.

PS: But how do you know it’s malleable?
TM: One of the reasons that we know that it’s malleable is that although self-control is inheritable and does run in families and has a genetic component, it’s more like height than anything else. Height is one of the most strongly inherited traits that human beings have and yet when we improve the nutrition of the population everybody gets taller. So you can shift the entire population by an effective intervention.

PS: Height we know can be affected by nutrition. But how do you know self-control is like height? Why isn’t it more like what a lot of researchers say about IQ? You’re just born with it or you’re not. You’re born smart or you’re not.
TM: Well, there have been serious and concerted efforts to improve children’s IQ. Programs for self-control appear to be working. There have been at least 28 model projects tand overall they do have a positive effect on early childhood self-control.

PS: If I have a low self-control grandchild, what should I be doing?
TM: One of the most effective strategies is the weekly giving of allowance or pocket money as an opportunity for parents to teach self-control and model self-control. So rather than just handing the child the money and leaving it at that, the parent hands them a modest amount that has to be managed through the week, sits with the child and takes the time to anticipate what’s going to be coming up next week, what the child would like to do and helps them to make choices and understand the limited amount of money they have. If they buy less ice-cream on Monday, they might be able to go to the movies on Friday.

PS: Nobel Laureate Jim Heckman says you hike children’s IQ by 5-7 points if you got them in a certain age window.
TM: Right. The reason we were originally stimulated to do this work on self-control was at the request of James Heckman and when a Nobel Laureate says: Why don’t you do this? It seems like a good idea! His own work seems to suggest that non-cognitive skills, as he calls them, are the most vital for developing children’s financial success in midlife as they grow up. He does look at the aspects of intelligence that can be attributed to motivation and focus and pursuit of a goal, those kinds of features of intelligence, rather than pure problem-solving skill. So he’s focusing in on those kinds of features and in our language that means self-control. 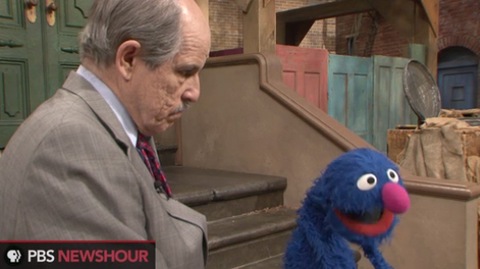 Paul talks to Sesame Street’s Grover about learning how to wait.

Paul Solman: So how do you teach little kids, kids your age, 6, 7, to wait?
Grover: Well, I say, I say: You know what? We are going to play a game. We are going to sit on this step right over here and we are just going to sit there for five seconds, just five seconds, not long at all. And then I say: Now, let us sit for another five seconds. How was that? Not so bad! Not so bad! No, no, because it is, it is really not that hard to wait once you get to the end of waiting.

Paul: So this is like sometimes when you’re too angry and someone says: Count to ten.
Grover: Yeah.

Paul: And then that feeling goes down and you’re not so angry anymore.
Grover: You know, I have no idea what I am talking about right now!

Listen to the audio

U.S. economy grew at 33 percent rate in third quarter, but recovery is incomplete