SACRAMENTO, Calif. (AP) — California has been a leader in restricting offshore oil drilling since the infamous 1969 Santa Barbara spill that sparked the modern environmental movement, and the latest spill off Huntington Beach is prompting fresh calls for an end to such drilling.

That’s easier said than done, even in California. While the state hasn’t issued a new lease in state water in five decades, drilling from existing platforms continues. Similarly, an effort in Congress that aims to halt new drilling in federal waters — more than 3 miles (4.8 kilometers) off the coast — wouldn’t stop drilling that’s already happening.

“Banning new drilling is not complicated,” he said. “The deeper question is how do you transition and still protect the workforce?”

Today, there are 19 oil and gas agreements in California’s coastal waters and 1,200 active wells. In federal waters, there are 23 oil and gas production facilities off the state’s coast.

A pipeline connected to one of those platforms in federal waters, run by Houston-based Amplify Energy, has spilled up to 126,000 gallons (572,807 liters) of heavy crude in one of the worst oil spills in recent California history.

Newsom said there is now a new sense of urgency to curb oil production, including by issuing more permits for well abandonment.

“It’s time, once and for all, to disabuse ourselves that this has to be part of our future. This is part of our past,” he said alongside other elected officials.

California remains the nation’s seventh-largest oil producing state, and winding down the state’s oil production has proved politically difficult. The industry employs more than 150,000 people and the state makes money from oil and gas leases.

Newsom highlighted the steps he’s taken to curb reliance on oil since he took office in 2019, including a plan to end oil production in the state by 2045 and stop selling new gas-powered cars by 2035. Still, his administration continues to issue new oil drilling permits off shore and on land, though in 2020 it issued more permits to close wells than to open new ones, said Jacob Roper, a spokesman for the state Department of Conservation.

Offshore, there are nearly 1,200 active wells in California waters, according to state data compiled by FracTracker Alliance. About 370 wells are idle, while nearly 1,300 have been plugged. Five permits have been granted to drill new offshore wells during Newsom’s tenure, according to the group. 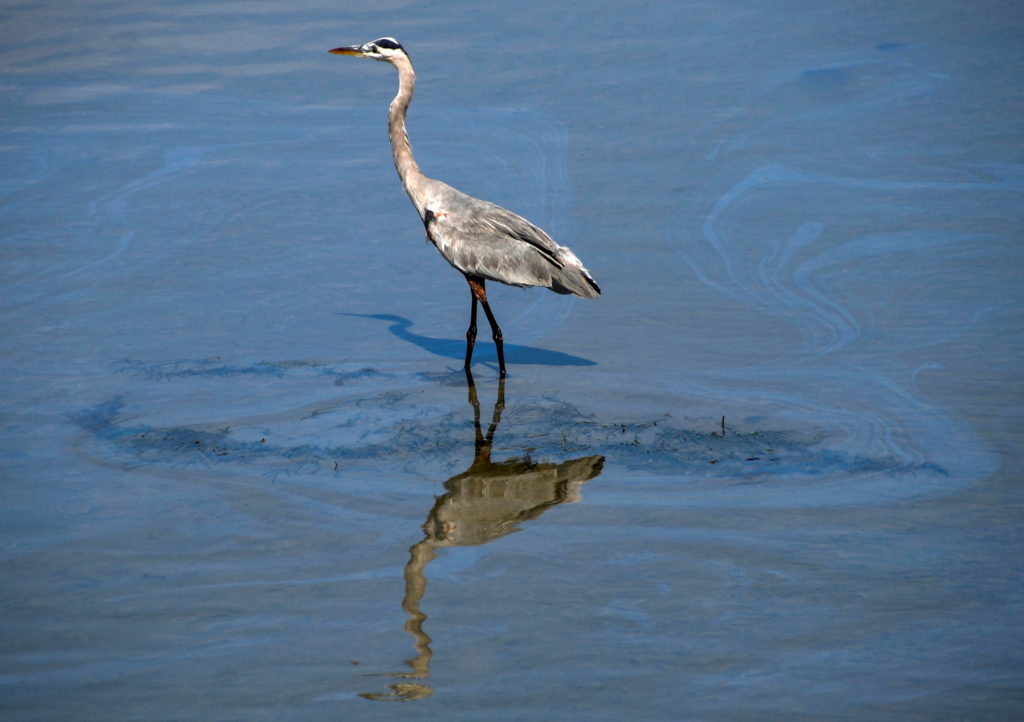 A bird walks through a small oil slick in the Talbert Channel after a major oil spill off the coast of California has come ashore in Huntington Beach, California, U.S. October 3, 2021. Photo by Gene Blevins/REUTERS

Efforts to plug and decommission several state oil platforms are underway, but the process is costly and time consuming. It’s expected to cost more than $800 million to decommission wells in the Wilmington Oil Fields off the coast of Long Beach. The state has just $300 million set aside.

“It boils down to finances and priorities,” Democratic state Assemblyman Patrick O’Donnell said. “I would hope that as we move forward we look at those wells ceasing to operate as soon as possible.”

California’s congressional delegation, including both Democratic senators, have introduced legislation to permanently ban new oil and gas drilling in federal waters off the coast of California, Oregon and Washington.

The bill, which lawmakers hope to include in a multitrillion-dollar social and environmental package being pushed by Democrats, would not affect existing leases that have been issued to longstanding oil platforms that were built from the late 1960s to early 1990s. Many California oil platforms like Platform Elly, where the recent spill occurred, have reached or exceeded their expected lifespan.

“As they age, these platforms become more and more fragile” and corroded from ocean water, said Deborah Sivas, professor of environmental law at Stanford Law School.

She said California operates with “cognitive dissonance” when it comes to oil by continuing to issue permits for drilling even as the state takes aggressive steps to tackle climate change.

Speaking alongside Newsom on Tuesday, Rep. Alan Lowenthal, a Democrat representing parts of Orange County, said the federal government needs to do more.

“We have to come up with a plan to not only stop new drilling but to figure out how do we stop all drilling that’s going on in California,” he said.

No legislation to ban current offshore drilling is pending in Congress.

A spokesman for the Western States Petroleum Association called the spill a tragedy. Amplify Energy, the owner of the platform, is not an association member. While the spill is prompting calls for more restrictions on drilling, spokesman Kevin Slagle said he hopes “we don’t resort to bans and mandates to address our energy future.”

Any proposal to further restrict drilling in California is likely to increase demand for imports from Saudi Arabia, Ecuador and other countries, Slagle said. Imports account for more than half the state’s oil use.

California’s status as an oil-producing state has long bedeviled Democratic governors, including former Gov. Jerry Brown. While known internationally for his work fighting climate change, Brown drew criticism from environmental groups for not doing enough at home to crack down on drilling.

But he acted swiftly to resist new federal drilling off California’s coast during the Trump administration, signing laws prohibiting the state from leasing new infrastructure, such as pipelines, to support federal drilling.

The Huntington Beach spill shows that regulations aimed at ensuring safe operation of offshore wells are more important than ever, environmental groups say.

“Incidents like this one really bring home the need for rigorous regulation of existing platforms” with frequent, regularly scheduled inspections, said Irene Gutierrez, a senior attorney for the Natural Resources Defense Council.

Even when wells no longer produce oil, they often sit idle for decades before they are plugged and abandoned. The State Lands Commission, which Newsom chaired as lieutenant governor, has begun the process of decommissioning Platform Holly off the coast of Santa Barbara and the manmade Rincon Island in Ventura County, but the process is expected to take years and cost tens of millions of dollars.

Newsom said he’s proud of that work, even if it’s not happening as fast as some people would like.

Left: A warning sign is posted for people to stay out of the water after a major oil spill off the coast of California came ashore in Huntington Beach, California, U.S., October 4, 2021. Photo by Mike Blake/REUTERS