Can Microsoft Be Saved? Maybe Not 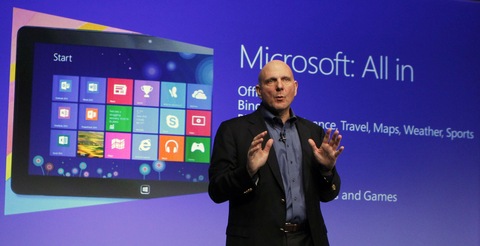 Is Microsoft going the way of the Soviet Union? Vivek Wadhwa, vice president for academics and innovation at Singularity University, director of research at Pratt School of Engineering, Duke University, and a fellow at Stanford Law School, thinks so. A good friend of the Making Sen$e Business Desk, Wadhwa takes another look at Microsoft’s future — an issue he explored earlier this week in his column on the Washington Post’s Innovations blog.

Vivek Wadhwa: When companies become too big, they usually lose their ability to innovate. There are a few notable exceptions, such as Apple, GE and Google, but most become complacent and focus increasingly on defending their existing turf rather than on creating new markets. Thus they begin their march into oblivion.

That is the present state of Microsoft. It has become an old giant, obsessed with defending its ageing products. If Microsoft doesn’t change course, it is likely to suffer the same fate as that old superpower, the former Soviet Union, whose obsession with preserving its bloated bureaucracy led to its destruction.

Microsoft has lost ground in practically every emerging field, including mobile computing, music players, smartphones, search and social networking. Yes, it has had an odd success or two, such as the Xbox, but these are just flukes.

It isn’t that Microsoft doesn’t have talented people working for it. Quite to the contrary, it has an abundance of talent. For two decades, it was the tech industry’s strongest talent magnet. It hired the best of the best. And most of these geniuses haven’t left — yet.

My former students and friends who work at Microsoft tell me that they love the company, but are stifled by its bureaucracy, turf wars and central planning. Big ideas get quashed because they don’t fit into the corporate vision; products with great potential are killed because they could threaten the company’s core products. These employees believe that their talent is being wasted. They long for the days when Microsoft was a lean mean fighting machine.

That’s why I believe that the best path forward for Microsoft is to break itself up into a number of fighting machines — smaller companies that compete with upstarts in Silicon Valley and with each other. These micro-Microsofts need to have the freedom to take risks and cannibalize the company’s core products. That won’t happen under its present structure.

The Windows 8 fiasco illustrates the problems that Microsoft faces. Windows RT, the version of Windows 8 that was designed for tablet computers with touch screens, has a beautiful user interface and functionality. In many ways, it is better than Apple’s iOS and Google’s Android. But Microsoft was obsessed with protecting its Windows operating system and Office tools franchise. So it bundled a version of Microsoft Office into RT. To make the desktop version of Windows 8 consistent with RT, it added to it the same tiled user interface and removed the Start button.

Most desktop computers and laptops, however, don’t have touch screens. And Windows users aren’t used to computers without Start buttons. So they hated Windows 8 desktop, and it was a commercial disaster.

The inclusion of Microsoft Office on RT and Microsoft’s desire to protect its operating system’s pricing structure led it to charge re-sellers a price rumored to be about $85 (the re-seller price is a well-guarded secret). This is more than what lower-end tablets will soon cost, and competes directly with Android, which Google gives away. That’s why RT, too, was a commercial disaster.

The sensible thing for Microsoft to do would have been to provide a lighter version of RT — for free. It would have competed head to head with Android and would likely have won because it has a superior user interface. Microsoft could have made money by charging for special features and apps such as Office. If Microsoft’s RT division had had the freedom, it might also have done the unimaginable by bundling Google’s Office apps and other competitive products into it.

Tablet prices are dropping rapidly. I expect that next year, there will be several players selling devices that cost less than $100. Full-featured tablets that cost around $50 — and less — are also on the horizon. When these become available, the market for tablets will explode. There will be hundreds of millions, perhaps billions, of such devices. Instead of running Microsoft’s RT, they will likely run Android. Microsoft has lost its opportunity to sell additional products on these devices through its obsession with protecting its legacy software. Windows and Office will likely slip into oblivion like the five year plans and Politburo the Soviet Union clung to.

But there is still hope for Microsoft. It has a wealth of great people and great technologies in its labs. They need to be untethered from the central bureaucracy and set free to compete and take big risks. I am not too optimistic, though, that this will happen. I worry that Microsoft will go the way of Kodak, RIM and Nokia — or even the former Soviet Union — all of which tanked because they were busy protecting old turf.