Question: I understand that it is more profitable for high-tech companies to have their devices manufactured overseas (primarily in Asia) than to manufacture them domestically. Could these companies manufacture their products in the U.S. and still make a profit even if it is less than what they would receive from overseas manufacture? What sort of differences in profitability are we talking about?

Paul Solman: Differences in cost and thus in profitability vary from company to company, country to country. Labor costs are obviously cheaper in poorer places; taxes are lower in lots of places. So too are costly government regulations. (Think of “toxic toys” from China.)

Remember how a competitive market system works, though. The most profitable firm is the one that most lowers its costs and thus takes business from its rivals, all else equal. Therefore it attracts the capital to keep expanding. In theory, “less profitable” eventually becomes not profitable as customers and investors move on. Sunny-side-of-the-streeters point to the virtues of such competition: pieces of clothing were often heirlooms in the 18th century; six-penny nails were about six-pence per hundred when first named — about ten dollars in today’s money. Small consolation, I realize, for those who lose their jobs in this process of “creative destruction.” But that’s how the system works.

A country may well decide that profitability — i.e., the market — should not be the sole arbiter of industrial location. Suppose some country were to make toys with slave labor, say, or concentration camp internees. Their costs would presumably be lower, their profits higher. But we in turn would presumably retaliate by slapping a huge import tax on their products (a “tariff”) or banning their goods entirely. 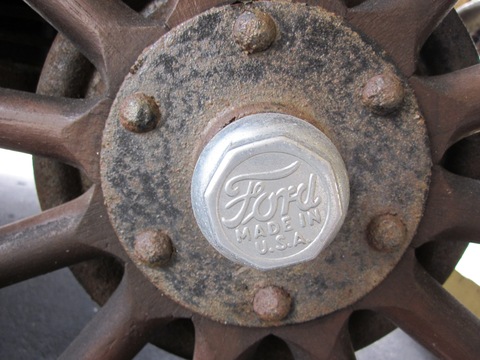 A 1926 Ford Model T hubcap is imprinted with “Made in USA.” Photo via flickr user Infrogmation.

As it is, we negotiate “side agreements” into trade treaties to encourage the ever-elusive “level playing field.” And appeals are made to domestic consumers with “Made in America” or “fair trade” labels. That is: Do you want better wages/cleaner environment/safer regulation abroad? Well, then, pay for it. In which case, profits will equalize between America and “unfair” competitors abroad.