China is spending nearly $1 trillion to rebuild the Silk Road

Two weeks ago, a 32-container train from Wuyi, China arrived in Tehran, Iran. You might think the arrival of cargo by rail would be no big deal, but in this case you’d be wrong. This was the first journey of its kind between the two cities, and it shortened the typical ship-based travel time by 30 days. This new connection is among the first visible signs of a massive trade network that China is currently constructing across Eurasia. The Silk Route is being rebuilt.

Known as One Belt, One Road, China’s plan to build veins of trade over land and sea into Europe and Asia — announced in 2013 — may be the most significant global economic initiative in the world today, and it’s not getting the attention it deserves in Western media.

The initiative is gigantic, with future investments of almost $1 trillion already announced. In comparison, America spent an inflation-adjusted $130 billion on the Marshall Plan following the World War II. China’s web of trade would span over 60 countries that are home to 4.4 billion people — more than half of the world’s population. Further, the initiative would interact with economies representing more than 40 percent of the world’s GDP. It’s a massive program that has the potential to affect global trade patterns.

One Belt, One Road may be the most significant global economic initiative in the world today.

The initiative is broken into a land component, known as the Silk Road Economic Belt, and a sea component, called the Maritime Silk Road. The “Belt” will consist of a number of corridors connecting China to the far reaches of Eurasia by road and rail. The “Road” will involve the development of ports and shipping routes connecting Chinese harbors to Europe and the South Pacific.

Funding this massive program is not a trivial undertaking. There are a number of institutions on hand to support the funding of China’s grand vision. First, Beijing started a $40 billion “Silk Road Fund” that has already helped fund a hydroelectric power project in Pakistan and invested in a liquefied natural gas project in Russia. Second, there’s the newly created, $100 billion Asian Infrastructure Investment Bank in which China controls 26 percent of the votes. It’s logical to assume it might finance some of these projects. Lastly, the China Development Bank announced in June that it would invest a stunning $890 billion dollars in over 900 One Belt, One Road projects across 60 countries.

So why would China want to deploy capital in this way? After all, doesn’t it face a massive domestic slowdown and potential debt crisis that warrant financial prudence? Why invest abroad aggressively when there are potential domestic needs? 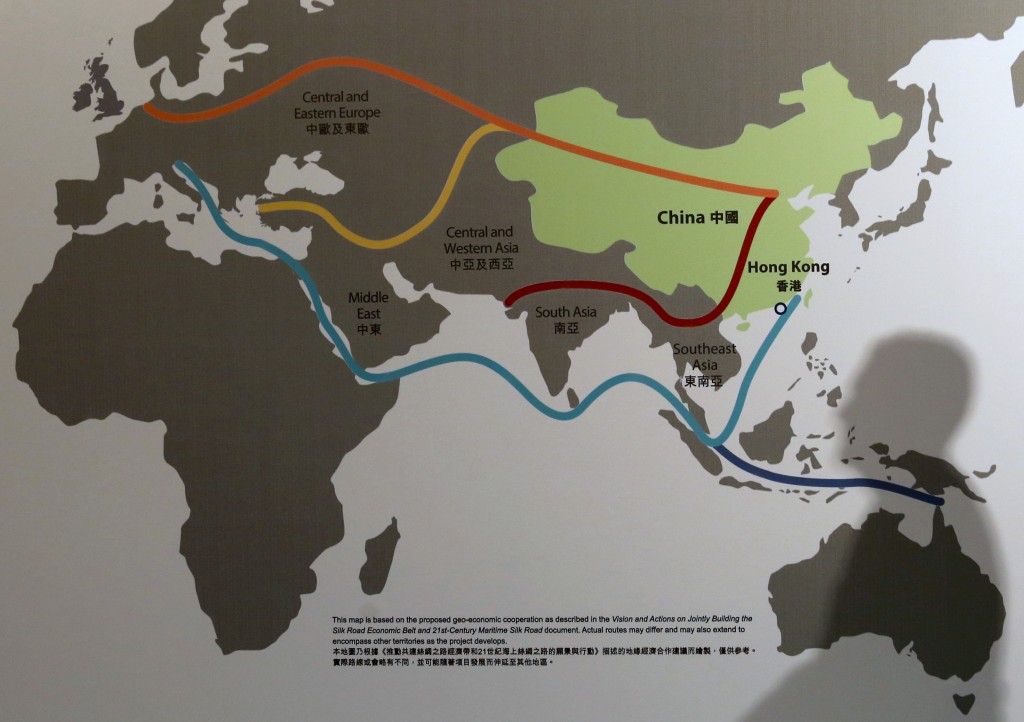 A map illustrates China’s One Belt, One Road megaproject at the Asian Financial Forum in Hong Kong, China Jan. 18, 2016. Photo by Bobby Yip/Reuters

There appear to be two main reasons: one related to the Chinese slowdown and economic vulnerabilities, the other to geopolitical ambitions in the region.

It will also foster greater trade and energy security. The current maritime trade routes, which Chinese goods flow through, are deeply vulnerable — in a time of war, a blockade could crush the economy. The Silk Road initiative will keep markets open for Chinese goods, but also secure China’s access to energy. Last spring, China announced it would support over $20 billion worth of infrastructure projects in Kazakhstan, a potential energy partner. It is also planning a 2,000-mile, high-speed railway from western China to Tehran, in part to gain easier access to the growing supply of Iranian oil.

In addition to bolstering its economic strength, One Belt, One Road will also generate significant geopolitical clout for Beijing.

In addition to bolstering its economic strength, One Belt, One Road will also generate significant geopolitical clout for Beijing throughout Southeast, South and Central Asia as well as the Middle East, parts of Africa and Europe. Just consider the influence China will have in Pakistan. Beijing has already launched a $46 billion infrastructure program in Pakistan, which will double the energy-poor country’s electricity supply. In return, China will secure access to the port of Gwadar, minimizing the time for goods to transit from inland Chinese cities to global markets. Investing in Pakistan will help develop western China.

The Pakistani alliance is particularly useful, since China can use it as a counterweight to India’s influence in the region, and controlling instability in Pakistan through investment might lessen the risk of it spilling into China. Beijing already has growing concerns of restive minorities within China and wants to minimize the likelihood of domestic instability gaining momentum from external sources.

Despite the clear benefits the Chinese strategy seems to offer, it’s not without risk. The Financial Times pointed out that the sheer ambition of the project is part and parcel with the fragmented and often contradictory process of economic policymaking in China. How implementation goes is anyone’s guess.

Further, Chinese inroads abroad could produce international tensions. Russian President Vladimir Putin has signaled openness to cooperating with the initiative, but it remains to be seen how far he will tolerate Chinese influence in Central Asia.

And the countries that are part of this new Silk Route are not without significant credit risks and political risks. Local instability could undermine investment projects in countries like Pakistan, which is deploying thousands of troops to safeguard China’s investments. The private-intelligence firm Stratfor also points out that the flip side of stronger connections is that they will “provide new routes for the illicit movement of goods and people into China.” Could major Chinese cities emerge as terrorist targets, as New York, Paris and London have in recent years?

Despite this uncertainty, it is particularly unwise to ignore the One Belt, One Road initiative. It just might shape the 21st century as much as the Marshall Plan did the 20th.

Left: An man in ancient Chinese costume walks next to a camel while participating in the Silk Road Cultural Journey, in Jingyang, Shaanxi province September 19, 2014. China is rebuilding the Silk Road. Photo by Rooney Chen/Reuters