Column: Why 5.2 percent income growth still leaves us in the doldrums

Editor’s Note: John Komlos, professor emeritus at the University of Munich and author of “What Every Economics Student Needs to Know and Doesn’t Get in the Usual Principles Text,” explains why the superb news from the census report released last week doesn’t feel so superb for many Americans.

There has been much hype in the media about the new census report, which indicates that median real household income increased at a record rate of 5.2 percent in 2015 to $56,500. These are without a doubt nice numbers — numbers that The Wall Street Journal actually referred to as a “surge.” But before we get too carried away, let us remember Aristotle’s counsel that “one swallow does not a summer make.” So let’s take a look at the data from a longer-run perspective.

Let us remind ourselves that the Great Recession was officially over in the summer of 2009, but it sure did not feel like it until a few years later, because incomes did not actually reverse course until 2013. (From now on, I’ll refer to median real household incomes as just “incomes.”) Despite growing in 2013, 2014 was yet another setback year in which incomes actually declined by $800. So the “surge” of 2015 is due in no small part to the low level of 2014.

Compared to 2013, the increase in 2015 was merely 3.6 percent in two years, or about 1.8 percent per annum. That does not warrant a great deal of jubilation.

But there are more reasons not to pop the champagne bottles just yet: In spite of the increases in 2013 and 2015, incomes are back to where they were in 1998. That is to say, while there have been many ups and downs in between, incomes have basically been stagnating for no fewer than 17 years! That is quite a disheartening statistic and reflects what Larry Summers calls the “secular stagnation” inflicting the nation. In other words, it is not just a question of recovering from the financial crisis. Even before the crisis, incomes were below their 1999 peak value.

Date refers to the year in which previous peak income was reached. Years refers to the number of years income has been growing. The annual average increase of $129 is obtained by the average, weighted by population size.

These data are also available at the state level. The 50 states and the District of Columbia fall into four categories. In the first six states plus D.C., incomes have been growing since the last peak on average 14 years ago (as seen in Table 1). These 50 million people are the exception; nonetheless, their average increase in income has been a meager $126 per annum, far too small to have an effect on their subjective evaluation of the quality of life. 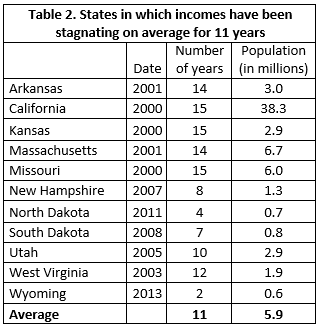 Date refers to the year in which incomes were equal to their 2015 level. Total population is 65.2 million.

The remaining 44 states conform to Summer’s stagnation thesis and can be divided into three groups, according to the length of time incomes have been stagnating in those states. The first of these groups, encompassing 11 states and 65 million people, has not exceeded its previous peak, which was reached sometime in the 21st century (Table 2). On average these states have been stagnating for 11 years. 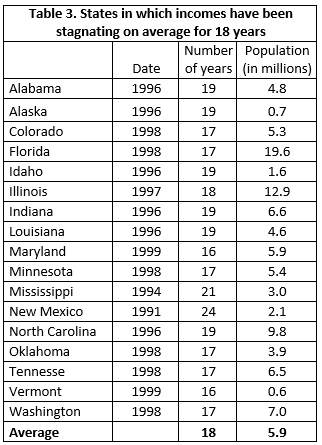 Date refers to the year in which incomes were equal to their 2015 level. Total population is 100.3 million.

In the next 17 states, encompassing some 100 million people, incomes have been stagnating for 18 years — that is, since about the middle of the 1990s (Table 3).

Finally, there is a group of 16 states with a population of 101 million in which incomes have been stagnating since the mid-1980s — for 28 years (Table 4).

Let’s be clear that such widespread prevalence of stagnation is unprecedented in U.S. history since the founding of the Republic. So even with a 5.2 percent increase in incomes in 2015, there is not enough growth to celebrate. Wishing, hoping and rooting for growth — real growth that people can actually feel — is not going to make it happen. One has to come to terms with the realization that cutting taxes, the pet project by those on the right of the political spectrum, will have as many negative consequences as they did in the past. These tax cuts accrue almost exclusively to the super-rich, and instead of being job creators (as the trickle-down theory suggests), the super-rich are just conspicuous consumers. Trickle-down economics is nothing more than a scam and a windfall for the super-rich. 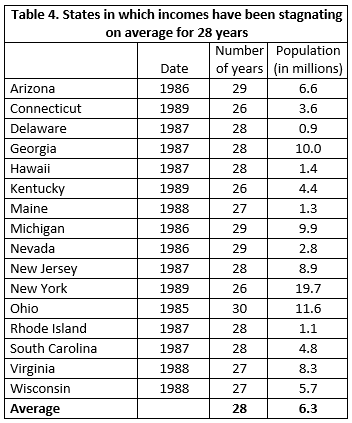 Date refers to the year in which incomes were equal to their 2015 level. Total population is 101.0 million.

If trickle-down had worked, we would have been growing with leaps and bounds for a generation instead of stagnating. But in place of jobs, cutting taxes has left us with the toxic brew of mediocre schools, aging infrastructure, global warming and an immense amount of discontent, which has led to a dysfunctional political system.

There is only one way to get out of these doldrums and that is through an increase in taxes on the super-rich. That would enable us to undertake massive investments in education beginning in preschool and providing free college tuition to those in need like we did with the GI bill after World War II. If we could afford it then, why can’t we afford it now when we have three times the income?

One reason why growth faces such a heavy headwind is that we are currently wasting an incredible amount of human resources by allowing high tuition rates to exclude millions from obtaining a college education at a time when it is more important than ever. This is an incredible contradiction to the American commitment both to efficiency and opportunity.

There is only one way to get out of these doldrums and that is through an increase in taxes on the super-rich.

In 1973, college-educated men and women earned 40 to 50 percent more than those with a high school diploma. Today the comparable difference is practically double that, at 80 to 90 percent! A high school diploma is worth $2.30 an hour, or $4,000 a year. Given that there were 2.5 million high school dropouts in 2014, the elimination of that alone would add an additional $10 billion worth of income in the hands of consumers. On the other hand, a college education is worth $12 per hour in today’s economy for women and $16 for men. Annualizing that would raise incomes by some $24,000 per year for the 1.3 million high school graduates who do not go on to college. That would be an immediate 50 percent jump in their incomes every year of their lives and an addition of $30 billion annually. Now that would provide some real growth Americans could actually feel. Such policies would amount to substantial gains for those students. But if we can’t get our act together, we will be in the doldrums for a long time to come.

Left: A sign on a tent is seen at Tent City 3, a homeless encampment in Seattle, Washington January 15, 2015. Seattle Mayor Ed Murray will submit legislation to the City Council this week seeking approval of three new homeless encampments, saying the tent cities are needed to deal with rising homelessness, his office said on Thursday. Photo by REUTERS/David Ryder