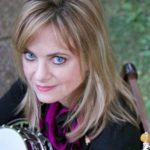 Column: A banker-turned-banjo player finds payoff in her passion

Editor’s Note: Here’s a story you don’t hear too often: An investment banker leaves it all behind to become a touring banjo player. Alison Brown is a USA Artists fellow, a Grammy winner and co-founder of Nashville-based Compass Records. But she only got there by deciding to leave her desk job, a career she says was “born out of pragmatism, not passion.”

We came across Brown when Jon Shayne (who goes by the stage name Merle Hazard) began working on a bluegrass song on the Fed’s plan for interest rates, which later became the basis for a Making Sen$e segment. Unable to completely leave her interest in the Fed and interest rates behind, Brown joined on as the banjoist, put together a band and produced the session with Shayne.

Economics correspondent Paul Solman asked Brown to share her story of her transformation from investment banker to banjoist and small business owner. Read her story below and watch “How Long (Will Interest Rates Stay Low)?” for a little more hee-haw in your life.

My career was by no means a straight shot. I played on the Grand Ole Opry stage in Nashville as a teenager, went to college in the Ivy League, worked at a Wall Street firm and then began touring as a musician and living in Nashville.

I was 10 years old the first time I heard bluegrass legend Earl Scruggs play the banjo. My guitar teacher had given my father and me a Scruggs album, “Foggy Mountain Banjo,” and I was hooked. The music told the story of an America completely different from the world I knew growing up (first in Stamford, Connecticut, then in La Jolla, California), giving me membership in a diverse, intergenerational and international community. I played banjo incessantly and, at age 15, won the Canadian National Banjo Championship, which led to an appearance on the Grand Ole Opry the same summer.

But I had no idea how I could translate my passion for the banjo into a career. It’s not like accounting or law, every step more or less spelled out until you arrive at your destination; those of us who build a life in music each arrive by a different path.

When I was finishing high school in 1980, I did not have the moxie to choose the road less traveled. So I followed the advice of my parents, who were lawyers then and still are today. They encouraged me to think of the banjo as an “avocation” — fodder for cocktail party conversation in my future career as a doctor/lawyer/business person. I headed back east to Harvard for college and went on to get an M.B.A. from UCLA.

After business school, I took a position in San Francisco as an associate in public finance with Smith Barney Harris Upham — a choice born out of pragmatism, not passion. Investment banking was the most coveted career path among my classmates. It looked as if there would be cocktail parties aplenty in my future.

I often sat at my desk with a copy of Bluegrass Unlimited magazine hidden inside the Bond Buyer and dreamt about the banjo.

The experience was what you might expect from a Wall Street gig: long hours and frequent all-nighters. (And I had thought the couch in my office was a status symbol!) The bosses were exacting with plenty of machismo. Sure, it was edifying, but the biggest takeaway for me was that while there are truly gifted financial people born to ponder creative structures for tax-exempt bond refundings, I wasn’t one of them. I often sat at my desk with a copy of Bluegrass Unlimited magazine hidden inside the Bond Buyer and dreamt about the banjo. What could I do if I could devote my energy to music instead of bond refundings? I had to find out.

I had never entirely given up banjo, and fortunately, a concert promoter I knew from the music scene around Harvard Square connected me with rising bluegrass singer and fiddle player Alison Krauss. Alison asked me to join Union Station, so I traded the all-nighters in the bullpen for all-night drives in a second-hand van, crisscrossing the country. It was a kind of pilgrimage, doing shows across the Southern Appalachian states where bluegrass music was conceived, occasionally in remote places where folks figured that Alison and I must have been sisters, because we had the same first name. (Yes, this really happened.)

I was livin’ the bluegrass dream, and it was amazing. But a certain part of me still thought like the Smith Barney associate I recently had been; my calculator, a Hewlett Packard HP-12C, forever in my backpack, called out to me occasionally. I still hadn’t quite found my calling.

The next step happened several years later, at a café in Stockholm, weeks into a world tour as band leader for a folk/rock artist. Garry West, the band’s bassist, and I were talking about how to make sense of the jigsaw pieces of “a life in music.” We came up with the proverbial back-of-a-napkin sketch, which we called, “The Good Life.” Taking turns with a pen, we drew a wheel with radiating spokes labeled “record label,” “touring band,” “recording studio,” “publishing,” “management,” and “home.”  I finally had a road map. (And a husband – Garry and I became a couple and eventually married.)

20 years down the road, our small but mighty imprint has an international reputation as one of the finest roots music labels going.

At the end of that tour, with seed capital from an angel investor who had heard Noah Adams interview me on All Things Considered, we launched a record label. Our first major asset was the North American distribution rights to a small Australian world music label we had discovered in Sydney. That company morphed into Compass Records a couple of years later, and now, 20 years down the road, our small but mighty imprint has an international reputation as one of the finest roots music labels going. Our 600 album catalog spans Americana, bluegrass and Celtic music, and we’ve been proud to count some of the most important artists in their genres on our roster: Altan, BeauSoleil, Victor Wooten, Peter Rowan and Colin Hay. (Colin even joined me for a track on my latest album, “The Song of the Banjo.)

The Compass Records office is a hive of activity. As I write, our engineer is mixing an album from a French Celtic band in the studio; our promotion team is working a new album from the Infamous Stringdusters; our sales director is setting up an upcoming release with our distributor; and our two kids are doing homework in the studio lounge. Later this afternoon, after I pull out my trusty HP-12C to review some monthly financial reports, I’ve got a rehearsal with my band for an upcoming European tour. It’s a lot to juggle, but I still can’t believe that I’ve figured out a way to turn my love of the banjo into a life.

A few years back, Harvard Business School did a case study on Compass Records. One of the questions students inevitably debate when they read it is how to quantify success in creative pursuits. In our company, we don’t measure success solely with a financial yardstick. There’s a significant altruistic component to what we do that is at least as important. Compass Records is committed to roots music because we want to support the artists who dedicate themselves to perpetuating traditionally rooted music, as well as to the musical communities that their efforts inspire.

In our company, we don’t measure success solely with a financial yardstick.

From banjo picker to banker and back again, one thing I know is that roots music brings people together in a way that little else can. In it, there is a place for people of all ages and backgrounds. It’s music that begs audience participation and teaches a lesson that many in our society seem to have forgotten — that everyone can learn three chords and join in. If that idea intrigues you, here’s one bit of sound financial advice from this recovering investment banker: Get yourself a five-string banjo, tune it to open G, and start picking. The first chord is free.

Left: Alison Brown is a USA Artists fellow, a three-time Grammy winner and co-founder of Nashville-based Compass Records. But she only got there by deciding to leave her desk job, a career she says was “born out of pragmatism, not passion.”

A former investment banker (with a bachelor's degree in history and literature from Harvard and an MBA from UCLA), Alison is a Grammy winner, USA Artists fellow and co-founder of Nashville-based Compass Records. In 2015, Alison received the Distinguished Achievement Award from the International Bluegrass Music Association for the furtherance of bluegrass music. Alison’s current release is “The Song of the Banjo.”