In baseball, the rule is three strikes, and you are out. In just over 100 years, the Federal Reserve already has three strikes in the form of massive monetary mistakes. The Fed’s failures are self-inflicted, indicating a flawed system; they are not the creation of a handful of flawed individuals.

In short, Chairman Bernanke lists tight monetary policy as the ‘main factor’ causing the Depression. What this quote omits is that the Fed was far too loose in the 1920’s. It added fuel to the already strong post World War I economy (the combination of cultural change and robust economic growth known as the ‘Roaring 20s’) and set the scene for the Great Depression.

If the Fed felt it was too tight in the Depression, it was determined not to repeat the same mistake after World War II. During the late 1960s and 1970s, the Fed’s monetary policy was extra loose. The Fed based its easy money policy on the Phillips curve model that loose money leads to inflation and growth. Unfortunately, the economy did not cooperate with the model, and the result was inflation and stagnation. The Fed’s mistakes in the 1960s and 1970s created a new term – stagflation.

From 2001-2005, the Fed was too loose. It cut interest rates (the blue line in the following chart is the interest rate the Fed sets known as the ‘Fed funds rate’) from over 6 percent to 1 percent. During this ultra-loose Fed period after 2000, real housing prices soared. The Fed then slammed on the financial brakes by rapidly increasing interest rates between 2005 and 2007. Subsequently, the financial system collapsed. 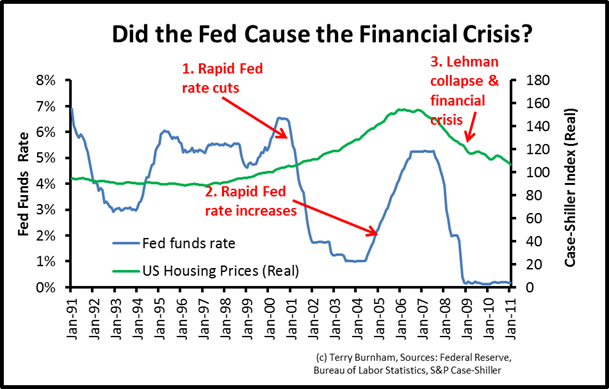 The world remains profoundly altered by the global financial crisis. All around the world, central banks purport to “support” the economy by a combination of money creation and financial repression.

The Fed put us in zombie ZIRP-land almost ten years ago by cutting short-term rates to zero. In ZIRP-land, senior citizens spend sleepless nights watching their wealth shrink as puny interest earnings fail to cover the cost of life. In ZIRP-land, stock prices twitch up and down, transferring wealth from the poor, old and financially unsophisticated to the rich and powerful.

Future crises caused by Fed policy are likely to be larger — larger even than the Great Depression — precisely because the Fed has taken such extreme measures.  For example, the Fed has created more money in the last decade than in the prior nine decades of its existence.

The Fed is responsible for its failures. No one forced the Fed to create the Depression by pumping up the Roaring 20s with loose money and then crushing the dustbowl 1930s with tight money. Stagflation was created by the Fed’s use of a failed economic model. Similarly, former Federal Reserve Chair Maestro Alan Greenspan and colleagues chose to pump up real estate and then smash the housing sector by ramping up interest rates. Congress did not specifically vote to authorize trillions in quantitative easing.

We have met the enemy, and it is the Fed.

What are we to do? Recognize that the Fed is a failure. No entity outside of the government could survive this nearly unblemished record of failure. CEO’s of bankrupt firms get fired. Generals who lose every battle are replaced. Coaches can only dream of a world where endless losses are rewarded with juicy contract extensions.

What comes after the Fed? Here are some thoughts.

A) Tightly constrain both the mandate and the tools of any new monetary authority. No country can become rich by printing money. Countries can, however, be destroyed by monetary mischief. Thus, the goal of monetary policy should be to let others make the country richer through private decisions.

B) Pick monetary authorities with some knowledge of markets or some business experience. The Fed is dominated by academics who have never met a payroll and never made a living in asset markets. They seem lost in the real world beyond the ivory tower.

C) Change the rules for appointment of monetary authorities. Federal Reserve Chairs serve for five year terms, and they are appointed by the President. This system creates incentives to please the President, usually in the form of overly loose monetary policy. The political process favors a short-term boost before elections, and a willingness to endure any amount of future pain in order to get re-elected.

D) Consider whether a central monetary authority is useful. Perhaps getting the government out of the currency business would bring fewer problems.

The Fed has failed. It is time to put it out of our misery.