Column: How the backlash to globalization could hurt the middle class

Our hunger for power is insatiable. In the United States, Russia, China, the world is filled with power-hungry people from all walks of life. Leaders and ordinary citizens alike are seeking more and more power. And no matter how you analyze the data (and there’s tons of it), this trend is likely to intensify in the weeks, months and years ahead.

I’m referring, of course, to our insatiable appetite for electric power.

A rapidly growing global middle class is generating rising demand for refrigerators, computers, televisions, air conditioners, smartphones and many other power-hungry goods. Further, because fossil fuels are used to generate a large portion of the power produced in the world, many are justifiably concerned about the impact of power generation on the environment.

Alternative energies like solar and wind offer some hope, but they’re fundamentally unreliable. The sun doesn’t always shine; the wind doesn’t always blow. To make alternative energies a truly viable source of power production, the world needs a robust, cost-effective means of storing energy. And while there are many different approaches to power storage, battery technology is among the more promising of the options. Sure, we’re all aware of the batteries in our smartphones and our laptops, but the possibility of batteries storing enough energy to power thousands of homes is not particularly intuitive.

Yet just such a venture got underway last week in California. On Jan. 30, Tesla launched a project near Los Angeles that takes excess power generated from solar during the day and stores it until the evening, when it can be used to offset production that’s less green. Batteries offer a path to viability for alternative energies.

Batteries are heavy users of lithium, an ingredient that can be accessed from subsurface brines or via hard-rock mineral ores. According to the U.S. Geological Survey, Chile has the world’s largest reserves of lithium, followed by China, Argentina and Australia. Lithium demand is poised to skyrocket, driven by growth in the electric vehicle market. Just think about the fact that one electric car uses roughly the same amount of lithium as 10,000 mobile phones. Yowser!

Last month, I was in Chile to address the country’s Mining Council. Given my fascination with energy storage and lithium, I took a trip to Salar de Atacama, the country’s largest salt flat and site of the world’s lowest cost lithium producers. I met with managers at Sociedad Química y Minera de Chile S.A., or SQM, who showed me around the company’s operations. Over the course of my three-hour visit, I developed a deep appreciation for the complexities and scale of the business as well as a respect for how thoughtful SQM had been about protecting the environment.

While touring the operations, I couldn’t help but note the amazing global supply chain. It had taken the lithium, containing salt brine I had run through my fingers, from below the world’s driest non-polar desert to Asian battery factories and eventually turned it into the affordable smartphone so fundamental to my day-to-day existence. Globalization and trade, I realized, works. 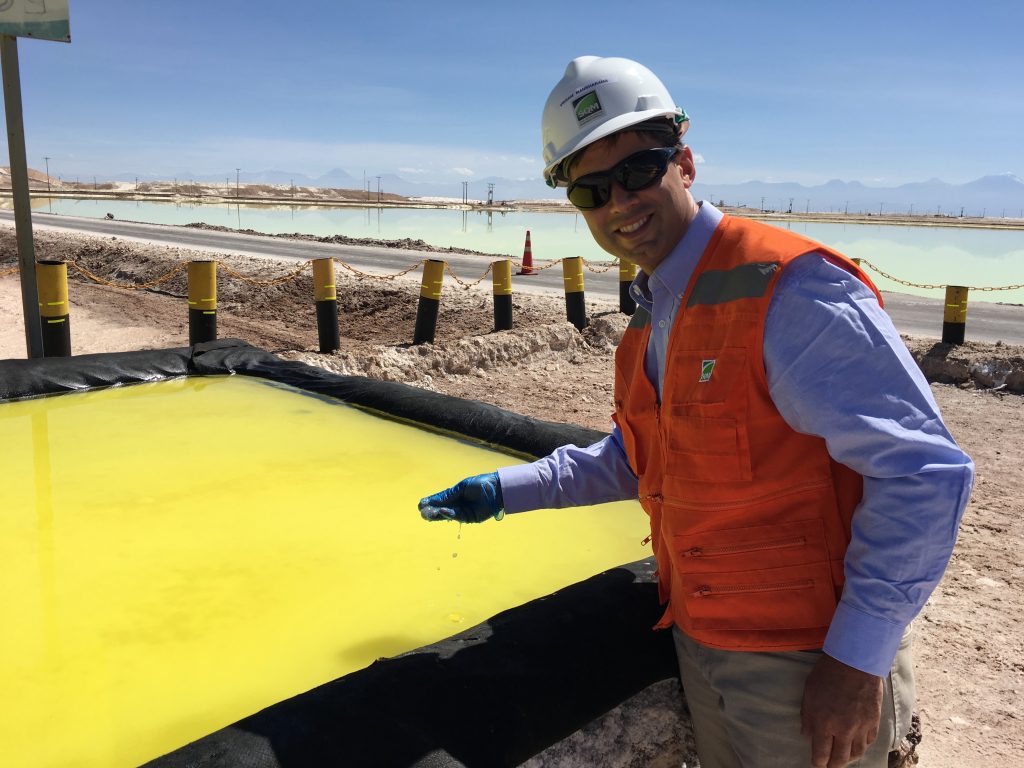 The author running his fingers through salt brine.

But it clearly doesn’t work for everyone — hence the current backlash against free trade, open borders and global markets.

What if the backlash works, however? World trade reverses; the lithium battery supply chain breaks. Is there any likelihood that robotics and automation won’t continue to replace human jobs? And how likely is it that the world’s leaders will adopt more inclusive policies, stronger safety nets and more progressive approaches to helping those left behind by globalization and technology?

Not doing so may lead to an unappetizing outcome: The hunger for power will drop as economies sputter, demand for appliances falls and the forthcoming middle-class boom remains indefinitely on the horizon.

Left: If the backlash against globalization is successful, "The hunger for power will drop as economies sputter, demand for appliances falls and the forthcoming middle-class boom remains indefinitely on the horizon," writes the author.