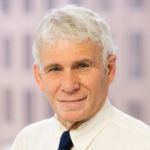 Ben Carson was sworn in Thursday as the new secretary of the U.S. Department of Housing and Urban Development. One way he can get off to a great start: helping communities use existing funds to promote homeownership, which will not only reduce poverty and material hardship but also use government resources more efficiently.

Ben Carson can get off to a great start by helping communities use existing funds to promote homeownership, which will not only reduce poverty and material hardship but also use government resources more efficiently.

Though home prices have increased since their 2009 lows, I’m making the same argument today. Cities could cover far more families at the same government costs by embracing the homeownership voucher strategy.

Nearly all Housing Choice Vouchers are used for rentals. Families pay about 30 percent of their household income toward rent, and the voucher covers the rest, up to a fair market rent price HUD estimates for each local area. HUD sets that fair market rent at the 40th percentile of rents in a community, a level higher than 40 percent of rents in the area. Government funding for vouchers can only cover a small share of eligible families, which results in long waiting lists.

According to a 2006 study, homeownership vouchers have shown positive results, with homeowners moving to lower poverty areas and experiencing low delinquency, default and foreclosures.While HUD allows housing authorities to use vouchers for homeownership, less than half of 1 percent are used for this purpose.

To determine how much money could be saved and reallocated by shifting from rental to homeownership vouchers, we must identify homes that are at least equal in quality to rental units at the 40th percentile. One conservative estimate is looking at homes with values at the 30th percentile. These homeowners have considerably higher incomes than those renting units at the 40th percentile, so the quality of their homes probably exceeds the quality of those rental units.

Next, we determine what homeowners pay every month compared with what renters pay. It might make sense for applicants to provide a modest down payment, but I assume the owner is financing the home’s full value with a 30-year mortgage at 3.75 percent. The carrying costs include interest, taxes, insurance and an $80 a month escrow for repairs. While current homeownership vouchers pay the loan’s monthly principal, owners should be responsible for some of that cost, because dollars going to principal represent the owner’s accumulated savings. For mortgage payments, banks would face little risk — if the homeowner loses his or her job and can’t pay, the government’s contribution would increase to the voucher’s full value.

Baltimore as a case study

Baltimore shows how homeownership vouchers can increase coverage and reduce housing cost burdens. The fair market rent for a two-bedroom Baltimore apartment is $1,376 a month. A family earning $1,000 a month would pay $300, and the voucher would cover the remaining $1,076 a month.

A Baltimore home valued at the 30th percentile is about $85,000. Assuming no down payment, the combination of interest, taxes, insurance and escrow for repairs amounts to about $460 a month. Again, the owner contributes $300 a month, but the government cost is only about $160 a month. Even when adding the principal repayment to the carrying costs, the net government cost would still be less than $300 a month.

Most other U.S. communities would see similar savings and could use the proceeds to expand coverage, reduce government costs or both. The table below highlights some of the many cities where government savings are substantial enough to finance at least two homeownership vouchers for the cost of one rental voucher. 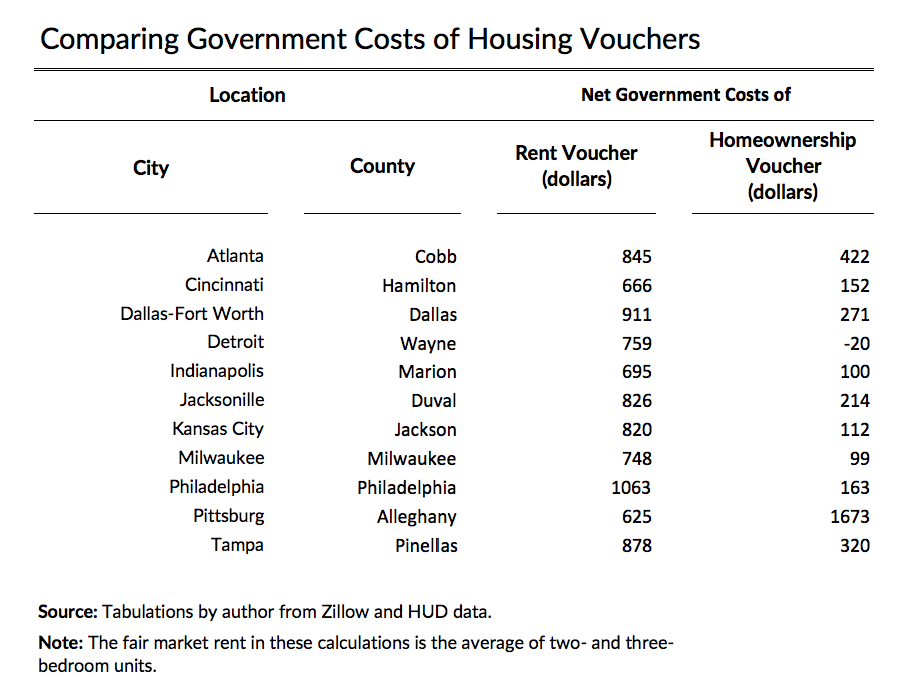 As under current regulations, eligible homeowners would have to attend and complete the housing authority’s homeownership and housing counseling program. To help homeowners maintain their properties, localities could designate a physical housing consultant and a team of local craftsmen to be on call for maintenance.

In addition to increasing access to housing subsidies, homeownership vouchers would lower the income threshold required to leave the program: Families with a voucher worth $500 a month would no longer require subsidies once they earn $20,000 a year. Also, unlike rental vouchers, which generally cost more as rents increase, homeownership vouchers would lock in the maximum monthly costs. Finally, the program would promote the stability and affordability of homeownership.

This column is reproduced with permission from the Urban Institute. It was first published on March 2, 2017. Find the original story here.

Robert Lerman is an Institute fellow in the Center on Labor, Human Services, and Population at the Urban Institute as well as professor of economics at American University and a research fellow at IZA in Bonn, Germany. A leading expert on apprenticeship, he recently established the American Institute for Innovative Apprenticeship. His current research focus is on skills, employer training, apprenticeship programs in the United States and abroad as well as housing policies.