Column: How can the stock market rally possibly continue?

Editor’s note: Vikram Mansharamani, for years a professor at Yale and who now teaches at Harvard, is an investment consultant, public speaker on economic trends and author of the book “Boombustology” about how to spot economic bubbles, the subject of a course he taught at Yale. Typically, Mansharamani writes confidently for Making Sen$e. But at the moment he’s bewildered. Here’s why.

The world seems very fragile right now. In the past week, North Korea claimed its missiles could reach the United States, spurring some in Congress to run through the calculus of striking the rogue nation before it attacks us. Pakistani courts ruled against Nawaz Sharif, the sitting prime minister, thereby forcing him to resign; Venezuela created an authoritarian regime that started cracking down on opposition leaders; Polish citizens were marching in the streets to protest proposed changes to the judiciary; HBO announced it had been the victim of a cyberattack that had stolen proprietary information; Russia began seizing American property and evicting U.S. diplomats; and White House turnover has continued unabated.

Oh, and Australian authorities stated they had thwarted a terrorist attempt to bring down a passenger aircraft. Last, but definitely not least, India and China flirted with military conflict over an unpaved road in a mountain pass in disputed territory in the Himalayan mountains.

And that was just in the past two weeks!

Despite these facts, financial markets have marched forward.

Meanwhile, there are early warning signs that the world’s largest economies may be slowing. GM reported a 15 percent drop in U.S. auto sales (with Ford and Chrysler also disappointing), and Fitch noted that credit card losses have been rising and recently hit a four-year high. In an effort to address unemployment, Canada announced it’s experimenting with basic income programs. And China’s most recent manufacturing purchasing managers’ index came in below expectations, hinting at the possibility that China may be slowing down (although the country did just open a cinema on a disputed island in the South China Sea).

Despite these facts, financial markets have marched forward, with the Dow closing above 22,000 for the first time last week. Sure, corporate profits have been generally quite good, but does that justify today’s nonchalant attitude toward these risks? Just look at the CBOE Volatility Index (known among financial types as the “VIX”) hitting new lows. Believed by many to be a measure of fear among investors, the VIX recently fell below 10, a level rarely seen in the past few decades. The implication: investors are not generally worried… which makes me worry!

Further, the investment community appears more willing to pay handsomely for the profits companies produce. Consider the cyclically adjusted price-to-earnings ratio, also known as the CAPE ratio, which is an admittedly imperfect, but useful, measure of valuation. The CAPE ratio recently crossed 30, a level it rarely reaches. To put this in perspective, the CAPE hit 33 in 1929 before the Great Depression and 45 in 2000 as the dotcom bubble burst. 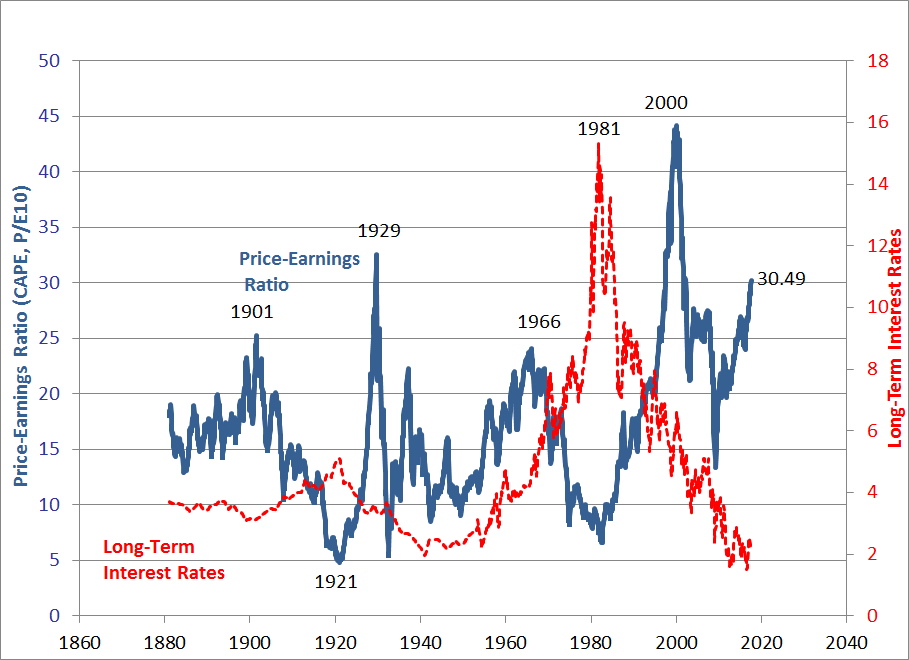 The hope that many investors have is that corporate taxes in the United States, currently among the highest in the developed world, are likely to fall. The result: higher earnings, which with all else equal, means lower price-to-earnings ratios. But the beauty of economist Robert Shiller’s CAPE ratio is that he uses 10 years of average earnings. So one would have to believe that taxes are going to be reduced immediately and stay lower indefinitely, with corporate earnings thereby rising and staying higher for longer. The key phrase of everything I just discussed is “all else equal.” And I simply have trouble believing that all else will remain given the dynamics that I described above.

And lastly, we have notable exuberance driving a formidable cryptocurrency bubble, eloquently and persuasively documented by Laura Shin in a recent Forbes piece titled “The Emperor’s New Coins.” Further, according to market data provider Coincap, there are currently more than 600 digital coins that in aggregate are supposedly worth more than $100 billion. And while blockchain technology will likely disrupt many businesses in the years to come, Shin’s article sheds light on the alarming speculative instincts that are thriving in the cryptocoin domain. If you haven’t read her article, I encourage you to do so.

READ MORE: Column: Is the boom of bitcoin a bubble that’s about to burst?

Regular readers of my columns may note that my concern about crypto-exuberance seems a contradiction from the piece I penned earlier this year on these very same electronic pages, in which I noted that bitcoin specifically did not exhibit the characteristics of a bubble. Well, since that piece was published, bitcoin has risen more than 300 percent and ether almost 2,000 percent. So yes, I’m changing my mind. As the saying goes, “when the facts change, I change my opinion… what do you do?” This is not to say that bitcoin and the cryptocurrency complex (it is indeed now a complex) won’t continue their ascent; they may. In fact, I still believe in the long-term potential of cryptocurrencies and am confident they have a role to play. It’s just that they are exhibiting the kind of speculative behavior that demands caution.

So what am I missing?

The world seems to be precariously balanced on the edge, with instability lurking in almost every region of the globe, but financial markets seem not to care.

The world seems to be precariously balanced on the edge, with instability lurking in almost every region of the globe, but financial markets seem not to care. (Or they’re hoping that our current administration will lower taxes, that the world will stay identical to its current state, that profits will surge, etc). Speculative instincts are running high, and valuations today leave little margin of safety. It reminds me of the 1980s song “It’s The End of The World As We Know It (and I Feel Fine)” by REM.

But surely there is a reason for the seeming disconnect, no? Might it be the devout faith in market efficiency? Could it be that the developments I’ve mentioned are fully factored in to market prices? Might it be the powerful and undying love of passive investing that has led to a world in which more and more money is doing less and less analysis? Or does the explanation lie with the famed 20th century British economist John Maynard Keynes, who wrote that, “Worldly wisdom teaches that it is better for reputation to fail conventionally than to succeed unconventionally”? In other words, is the risk-averse, career-driven decision-making of those controlling financial assets the reason for the continuation of this rally? Or perhaps, to use four words that makes anyone who thinks of bubbles shudder, it’s different this time?

What do you think? Please let me know your thoughts in the comments below.