Column: With its currency woes, will Nigeria let market forces do their job?

Earlier this month, I was in Nigeria for some meetings. One of the most striking things about the country’s economic situation was the parallel currency market. Despite a seeming end to the controversial peg to the U.S. dollar in June, the Nigerian naira continues to sell for different prices in different places.

Officially, it takes 315 naira to buy $1. However, I was told during my trip that the underground exchange rate was around 465. That’s not a typo. The official exchange rate and black market rate supposedly differed by almost 50 percent.

Skeptical that such a big disparity actually existed, I decided to change $50 into naira. I went to a particularly touristy spot at the Eko Hotel on Victoria Island, a location with lots of souvenir stalls that sell everything from locally-produced jewelry to African masks and carvings. Upon arriving, I asked a vendor where I might change some money. He smiled and introduced me to his boss, who asked, with an ear-to-ear grin, “U.S. dollars?” 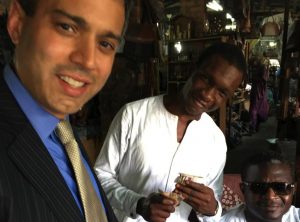 The author with a Nigerian vendor discussing exchange rates.

Aside from providing intellectual fodder for curious foreigners, the dysfunctions in the foreign exchange market are also impacting importers as they struggle to secure greenbacks to buy foreign goods. Further, investors have been reluctant to buy assets in a currency that is overvalued on official exchange rates and appears likely to fall. In part because of the shortage, inflation is now running around 18 percent. And the International Monetary Fund expects the Nigerian economy to shrink 1.7 percent this year. High inflation and low-to-negative growth is not a good combination.

There are many reasons why the currency is losing value, including the country’s dependence on oil for government revenues and foreign exchange. As an oil price taker, Nigeria is subject to global developments over which it has little control. But the spread between the official and underground rates is the result of a conflict between government policies and market-driven prices. And my experience changing money taught me the forces of supply and demand — not policies — were winning the battle. Unsurprisingly, the volume of foreign exchange traded at the official price had declined by 90 percent as the difference between market and official prices widened.

My experience changing money taught me the forces of supply and demand — not policies — were winning the battle.

Nigerian President Muhammudu Buhari is not new to wrestling with the naira. When he led Nigeria in the 1980s, he refused to devalue the currency as part of an IMF restructuring plan. Soon thereafter, a coup removed him from office. He’s back, this time as the result of a democratic election and peaceful transition of power.

Clearly, Nigeria’s economy is in desperate need of reform. How should the leadership address the country’s difficulties? In recent decades, one school of thought, known as the “Washington Consensus,” dominated. It emphasized the liberalization of markets, including those for foreign exchange, privatization of state-run firms and austerity measures to control runaway budgets.

As the global financial crisis eroded faith in market liberalism, consensus around these prescriptions faded. In June, three IMF economists published a paper, “Neoliberalism: Oversold?” arguing that the costs of austerity and capital account liberalization can outweigh potential benefits. Besides potentially generating instability and hurting growth, they can also drive inequality, which can further harm economic performance, the economists argued. Most importantly, however, the authors emphasize there is no perfect one-size-fits-all set of reforms.

So is Nigeria moving toward more or less government involvement? The short answer is yes. Rather than cutting budgets, Buhari has boosted infrastructure spending to counteract the downturn. And he has tried to control the currency market rather than allowing market forces to fully determine foreign exchange rates. But Nigerian leaders have also signaled intentions to sell state property, including presidential jets and energy assets. Buhari’s government is also working to attract foreign capital, in part by allowing private investors to manage infrastructure.

Rather than cutting budgets, Buhari has boosted infrastructure spending to counteract the downturn. And he has tried to control the currency market rather than allowing market forces to fully determine foreign exchange rates.

So perhaps the best description of the Nigerian approach is the one offered by the finance minister, who stated at an IMF-World Bank meeting that “we have our own local remedy” for addressing the country’s economic problems.

Outside of government, business leaders remain firmly in the camp of market-oriented liberalization, infrastructure investment and less government bureaucracy. Noting the need for the country to raise more than $15 billion in the coming years, Nigerian billionaire Aliko Dangote argues that the country should sell state assets and take out loans from China or elsewhere. Bola Onadele, the CEO of the Nigerian securities exchange FMDQ, believes the naira needs to float completely.

My money-changing experience in Lagos reminded me of Argentina in late 2015, where the “blue market” rate for dollars was 14.5 pesos versus the official rate of 9.9 pesos to the dollar. The wide spread was unsustainable, and in December of 2015, following a political upheaval that led the country toward more market-oriented economic management, the Argentine government removed capital controls. With business-friendly reforms in place, Argentine President Mauricio Macri is now courting international investors, who have already bought up billions of dollars in newly issued government bonds. And the IMF is predicting the Argentine economy will expand 2.8 percent in 2017. Global investors are taking notice, and the Merval index is up more than 30 percent in dollar terms since the December devaluation.

Like Argentina, Nigeria will likely have to suffer through the pain of fully floating its currency in order to recover. This may generate more inflation, possibly even hyperinflation. Recall that many Southeast Asian countries suffered through massive devaluations during the Asian Financial Crisis only to emerge a few years later with high growth and strong economies.

That’s not to say that policymakers shouldn’t take short-term pain into account when choosing a course of action, since it can generate instability, with enormous ramifications in the long run. Most important, they need to remember that local context matters. For most situations, cookie-cutter approaches are doomed to fail.

Left: A bureau de change operator counts U.S. currency notes in Abuja on March 12, 2015. In Nigeria, holding naira has become increasingly unpopular as it has lost its value. Photo by Afolabi Sotunde/Reuters