Column: Why does the Fed keep lowering its unemployment threshold instead of raising rates?

The answer would appear to be in wage growth. As shown in the small inset graph, there is a strong relationship between wage growth and slack in the labor market — as measured by the difference between the unemployment rate and the Fed’s NAIRU estimate. What this suggests is that the Fed has consistently overestimated wage growth, leading it to lower its NAIRU estimate when new wage data come out. 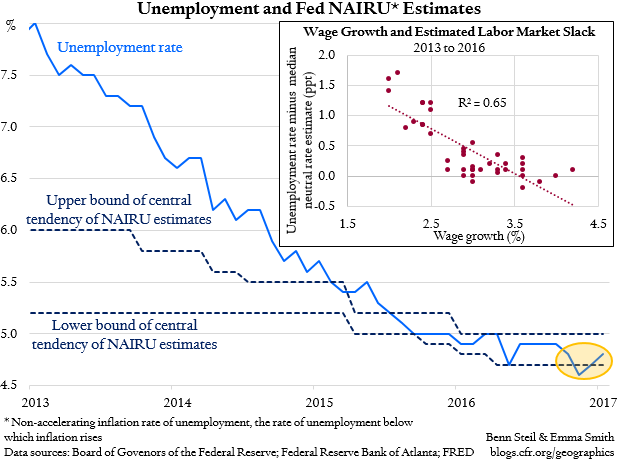 As the yellow highlighted part of the graphic shows, we appear to be at a turning point.  Wage growth was strong over the second half of last year, leading the Fed to leave NAIRU estimates unchanged as the unemployment rate continued to fall. That rate is now near the bottom of the Fed’s NAIRU range. This supports the case for the Fed to hike interest rates.

Should wage growth fall to 2.5 percent, we can, on past experience, expect the Fed to lower NAIRU again, such that its measure of labor market slack rises from zero to as much as 0.8 percentage points. If that happens, the Fed will put interest rate hikes on hold.

Left: NAIRU is the unemployment rate below which inflation should rise, thereby justifying tighter monetary policy. However, each time unemployment has threatened to break through NAIRU, the Federal Reserve has lowered its estimate of NAIRU rather than raise interest rates. Photo by Gary Cameron/Reuters