Column: Several governments are destroying their own bank notes. Here’s why.

Nov. 8, 2016 was a big day. Millions of citizens were stunned, literally unable to believe what had just transpired. Economists issued dire warnings, suggesting a negative shock to future growth. Many took to the streets in protest. Within a week, election commission officials started raising concerns over potential fraud. And over the next few weeks, dozens died. It will be a long time before the events of Nov. 8 are forgotten. Separately and completely unrelated, on the other side of the planet and on the very same day that spurred these events, America elected a new president.

Nov. 8 will be remembered in India for a long time to come. In a televised speech to the nation, Prime Minister Narendra Modi announced that cash notes representing 86 percent of the country’s circulating currency would no longer be accepted as legal tender come midnight that same evening. The existing 500 and 1,000 rupee notes that he demonetized, Modi explained, could be exchanged for newly issued notes before the end of the year. For those willing to provide identification when exchanging notes, the exchange period would be open until March 2017. (At current exchange rates, a 500 rupee note was worth about $7.50; a 1,000 rupee note, $15.)

And in a fast-growing economy with a large informal sector in which it’s estimated that around 90 percent of transactions take place using cash, trashing most of the cash in circulation was not unlike throwing sand into the gears of a machine running at full speed.

Given that the unexpected announcement came amid news reports that the U.S. election might affect the subcontinent’s relationship with America, Indians were caught completely off guard. In fact, many were stunned. And in a fast-growing economy with a large informal sector in which it’s estimated that around 90 percent of transactions take place using cash, trashing most of the cash in circulation was not unlike throwing sand into the gears of a machine running at full speed. Furthermore, because hundreds of millions of Indians lack formal bank accounts, the impact was felt most by the poorest. The gender impact was also uneven, given that 80 percent of women in India are unbanked, according to the UN.

Long lines at banks and ATMs quickly became commonplace, generating what the BBC reported as widespread chaos. One laborer noted, “it was like someone had picked my pocket” as vendors refused to accept his currency. It’s estimated that at least 70 people have died as a result of the demonetization. Overworked bank officials, as well as those denied medical services because of inappropriate currency denominations, are among the dead. “Day of Rage” protests erupted across the country, and as they did, the terms of the demonetization changed on an almost daily basis, leading to even greater confusion and uncertainty. 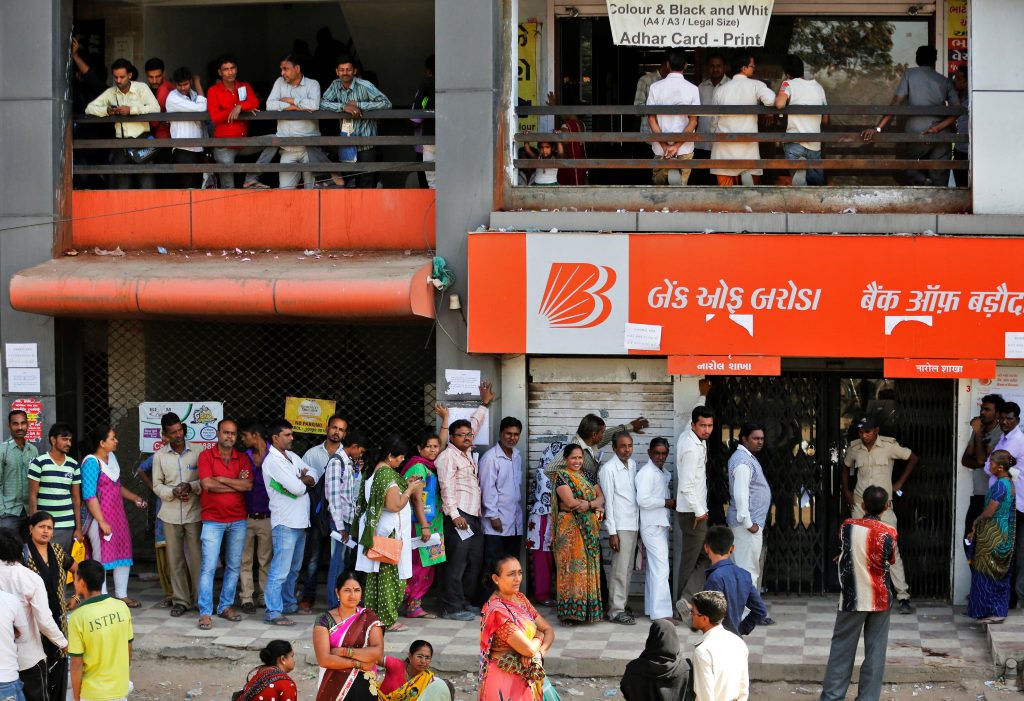 People queue to deposit or withdraw cash outside a bank on the outskirts of Ahmedabad, India, Nov. 29, 2016. Photo by Amit Dave/Reuters

As a result, economic activity in India is plunging. According to the Wall Street Journal, home sales are stagnant, political discussion about the scheme has brought the Indian parliament to a standstill, and tourists are paralyzed by the inability to use the Indian currency in their possession. The cash crunch is also rippling through supply chains, leading manufacturers to cut jobs, lower production and reduce demand for raw materials. Former Prime Minister Manmohan Singh has suggested India will suffer a drop in GDP of around 2 percent as a result of Modi’s “monumental mismanagement” of the demonetization effort.

So what was Modi thinking? He noted his primary objective was “to break the grip of corruption and black money.” Modi further stated, “black money and corruption are the biggest obstacles in eradicating poverty.” Indians hoarding bills would be forced to deposit or exchange them, allowing tax authorities to delve deeper into the sources of such funds. More tax revenues might lead to greater social spending and government support.

Indians hoarding bills would be forced to deposit or exchange them, allowing tax authorities to delve deeper into the sources of such funds. More tax revenues might lead to greater social spending and government support.

To prevent fraud during the exchange process, the government imposed limits on the amount of currency that could be swapped by any individual. To keep track of the limits, banks began to mark the left index finger of those who had exchanged old notes for new ones with permanent ink. But because this is the same method used to prevent election fraud, the Election Commission noted the marks might disenfranchise voters in ongoing local elections.

Another related goal of the effort, Modi noted, was to nudge the country towards “the realization of our dream of a cashless society.” According to research commissioned by MasterCard, India has one of the highest cash-to-GDP ratios in the world at around 12 percent, meaningfully above China (9.5 percent), the United States (7.5 percent), Mexico (5.3 percent), Brazil (3.9 percent), and South Africa (3.7 percent), but well below that of Japan (20.7 percent). Heading towards a cashless society would increase India’s effectiveness in monitoring tax compliance, tracking terrorist financing and of course spotting financial crime and corruption.

India is not the only country to eliminate large-denomination notes to attack corruption. In 2000, Canada retired its $1,000 bill because of its frequent use in criminal transactions. But because the notes retained their status as legal tender, many of them remain at large. Separately, Singapore is phasing out its $10,000 note. And just this week, Venezuelan President Nicolas Maduro made the 100 Bolivar note illegal in an attempt to thwart “Colombian smuggling mafias.”

Critics suggest that such efforts are ineffective at truly stopping large-scale corruption however. Arun Kumar, author of the “The Black Economy in India,” estimates that only 1 to 2 percent of illicit wealth is stored in cash. Most, he notes, is stored in gold, in property or in Swiss bank accounts. Further, Kumar notes that demonetization does not address the mechanisms or flow of dirty money — it only attempts to address the stock of prior gains from corruption. To truly target corruption, many believe essential policies include institutional reforms strengthening the rule of law, better law enforcement and public awareness campaigns.

Nevertheless, arguments from academics to trash cash keep building. “The Curse of Cash,” a recent book by Kenneth Rogoff, supports the claim that a large portion of high-denomination paper currency is used to enable tax evasion, finance terrorist operations and support underground economies in illegal drugs and human trafficking. (Rogoff wants to phase out the U.S. $100 bill.) A paper by Peter Sands, a senior fellow at the Harvard Kennedy School, also recommended eliminating high-denomination notes to deter these activities. And Larry Summers, former U.S. Treasury Secretary, has called for a global agreement to stop issuing notes worth more than $50 or $100.

We should of course insist on improved compliance and enforcement of a strong rule of law. But we should not dismiss trashing cash as a potentially useful tool to nudge better behavior.

To understand how these decisions might impact those transporting large sums of money in cash, consider the weight of U.S. $10 million in various currency denominations. A criminal carrying such a sum in U.S. $20 bills would need to lug 500 kg (more than 1,000 pounds!) of paper notes. In U.S. $100 bills, the weight would drop by 80 percent to 100 kg, about the weight of a large man. If using 500-euro notes, a criminal would only have to carry slightly over 20 kg. And using the Swiss 1,000-franc notes could reduce the burden to a mere 11 kg.

In a highly dynamic and uncertain global economy, there will always be nefarious actors trying to operate in the shadows. One way of targeting illicit activities is to increase the frictional costs of such doings by eliminating high-denomination notes. And although such efforts admittedly focus on symptoms more than the root causes of corruption, there is little downside in pursuing such an approach. We should of course insist on improved compliance and enforcement of a strong rule of law. But we should not dismiss trashing cash as a potentially useful tool to nudge better behavior.

Left: A customer waits to deposit 1000 Indian rupee banknotes in a cash deposit machine at bank in Mumbai, India, on Nov. 8, 2016. Photo by Danish Siddiqui/Reuters