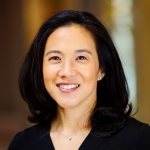 Column: When to quit, from an expert on grit

Editor’s Note: Since Angela Duckworth’s book “Grit: The Power of Passion and Perseverance” went on the shelves last week, “grit” has become a buzzword. The New York Times and The Atlantic are talking about it. And NewsHour economics correspondent Paul Solman recently traveled to Philadelphia to talk to Duckworth about the book and the concept. Tune in for our segment on tonight’s PBS NewsHour.

But first, here’s a column by Duckworth herself.

Is quitting ever a good thing?

I study grit, a quality you can think of essentially as the opposite of quitting.

Grit is passion and perseverance for long-term goals.

To have grit is to embody the Japanese motto: fall seven, rise eight.

Taken together, empirical evidence confirms common intuition: a disposition to endure to the end rather than quit early is the hallmark of high achievers. Moreover, grit goes hand in hand with both life satisfaction and emotions like joy and pride. So it seems that in general not quitting is a pretty good way to live life.

And yet, examples abound of people and companies whose apparent grit got them into trouble.

READ MORE: How economists think differently from other humans

For instance, I know a real estate developer who has for years and years insisted on sinking good money after bad into the same unsuccessful project.

Before I became a psychologist, I taught more than a few high school students whose aspirations simply didn’t line up with practical realities — most commonly, boys whose stated life goal was to play in the NBA, but who failed to consider, perhaps, that only 60 players are drafted annually across the entire country. What’s more, the average height of an NBA player is 6 feet 7 inches, and as they say, you can’t train height.

One final example: When I was growing up, Polaroid was among the most innovative and successful companies in the world, but the single-minded pursuit of better and better instant film cameras did not serve them well in the era of digital photography.

Taken together, empirical evidence confirms common intuition: a disposition to endure to the end rather than quit early is the hallmark of high achievers.

The question of whether grit impairs rational quitting was the focus of a recent laboratory study entitled, “When the Going Gets Tough: Grit Predicts Costly Perseverance.”  In one experiment, undergraduates took the Grit Scale and then spent 20 minutes solving as many anagram word puzzles as possible. Unbeknownst to participants, some of the anagrams were very difficult, while others were unsolvable. Overall, there was no relationship between grit scores and the total number of anagrams solved. However, compared to their less gritty peers, grittier participants spent more time unsuccessfully hacking away at those unsolvable problems.

In a second experiment, when led to believe they were losing, grittier adults playing a competitive computer game worked harder than less gritty players.

In a third experiment, players were given the option to keep playing and win $2 if they beat their opponent but nothing at all if they lost or quit early for a $1 payment. When they were losing, grittier players were more likely to choose playing again even if it meant giving up on a sure-fire bonus payment.

READ MORE: What Oprah and Warren Buffett can teach us about risk

So is grit a good thing, but is extreme grit bad? Aristotle intimated as much in his exultation of virtue as the “golden mean” between extremes.

I think prodigious grit is a good thing if applied to the right kind of goals. Put another way, there are certain situations in which blind passion and perseverance can make things worse.

If you’ve been trying and trying to accomplish a low-level goal, but despite your best efforts, you are making absolutely no headway, quit.

Having studied grit for more than a dozen years, here is my advice on quitting.

I’ll begin by pointing out that each of us has multiple goals — multiple things we’re trying to accomplish. The grittier you are, the more these goals are organized in a pyramid-like hierarchy, with numerous low-level specific goals on the bottom and fewer and fewer, increasingly abstract goals toward the top. Each goal is a servant to the goal above it; you only have low-level goals (like “get to my meeting on time”), because they serve higher-level goals (like “demonstrate respect for the people I work with”).

For a paragon of grit, the top of this hierarchy, like the star on a Christmas tree, is a singular life-organizing goal — an objective so ambitious it may never be accomplished completely and, yet, is so compelling, so important that you’re willing to spend your life in ardent pursuit.

If you’ve been trying and trying to accomplish a low-level goal, but despite your best efforts, you are making absolutely no headway, quit. Your energy will be better spent on a different low-level goal that accomplishes the same end. In other words, quitting on a goal such as “get into Harvard Law School” or “sell this particular product” is recommended after you’ve tried all possible tactics and come up empty. Now your job is to find an alternate path forward.

As my 18-year-old self put it in my high school yearbook: Go, go, go until you can’t go anymore…then turn left.

There really are dead ends in life. When you’ve tried hard and long enough to guess you’re in one, back up, and look for another way forward. Turn your dead ends into detours.

For years, I figured I’d stolen the line from some horrible 80s movie. I now think it’s just the way I learned to deal with repeated setbacks. There really are dead ends in life. When you’ve tried hard and long enough to guess you’re in one, back up, and look for another way forward. Turn your dead ends into detours.

Let’s return to those laboratory studies where gritty adults kept trying when persistence was costly. In that third experiment, it was discovered that after losing a game, grittier players felt more joy, hope and control than their less gritty counterparts. This optimistic outlook seemed to explain, at least in part, their decision to have another go when offered the opportunity.

There are close parallels between these recent findings and the discovery almost 50 years ago that uncontrollable stress causes most dogs to act helpless the next day in a different stressful situation. Most dogs. But not all. Despite having experienced pain they were not able to escape the day before, about a third of dogs kept getting up again. Like the gritty players in these recent experiments, these dogs seemed biased toward the belief that trying is better than quitting.

I agree that excessive grit applied to low-level goals is not a good idea.

That real estate developer I mentioned earlier really should really figure out what higher-level goal that money pit of a project is serving.

I should have asked those boys in my class why they wanted so badly to be NBA stars and whether there might be alternate routes to the same ultimate end. Do they want to do something they really enjoy and be really, really good at it? Do they want status and financial security? Playing in the NBA is not the only mid-level goal that would achieve those higher-level ends.

And Polaroid? If your top-level goal is to help people share visual memories, well then, there’s no reason to anchor your entire research and development division to the mid-level goal of making better film cameras.

As for laboratory experiments of persistence after failure, they seem too brief to really test whether grit is misdirected at low-level goals. After all, 20 minutes isn’t enough time to know that you’re in a dead end. And the way those experiments are designed, quitting means quitting entirely — not trying another path.

Quitting is sometimes a good thing, but more often, not quitting is better.

Imagine this: If you gave a bunch of job applicants a game to play that was rigged to make them lose, and some kept trying to win, and when given the opportunity, they asked to play again, would you hire them? Would you worry that these chumps don’t know when to quit?

If you met someone like actor and musician Will Smith, who attributes his stratospheric success to one simple factor — his willingness to outwork anyone and his absolute refusal to give up on what matters — would you guess they’d fail in life or succeed?

Quitting is sometimes a good thing, but more often, not quitting is better.

Left: Grit is passion and perseverance for long-term goals — essentially, the opposite of quitting. But is quitting ever a good thing? Psychologist Angela Duckworth, author of "Grit," explores the question. Photo by Erich Schlegel/USA TODAY Sports

Angela Duckworth is a professor of psychology at the University of Pennsylvania and a 2013 MacArthur fellow. She is also the founder and scientific director of the Character Lab, a nonprofit whose mission is to advance the science and practice of character development.