Column: Why, as an immigrant, I am not outraged by Trump’s immigration proposal 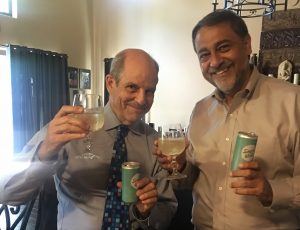 Editor’s note: Silicon Valley entrepreneur Vivek Wadhwa has appeared frequently on this page, most recently here. I was shooting with him just last week in and around his home in Palo Alto for a story on his new book, “The Driver in the Driverless Car,” and his forecast of an imminent job crisis caused by high technology and what we as a society should do about it. (He does embrace technological change, however, in the form, for example, of the canned prosecco he served from his refrigerator.)

And more to the point, high tech in the form his Tesla, which can already do a lot of the driverless driving, including parking itself in Vivek’s garage by remote control — somewhat haltingly — as this brief 1:33 video clip demonstrates:

An immigrant from India, Vivek has been a staunch — some would say “strident” — supporter of diversity, especially in high tech, where he has found it lamentably lacking with regard to both gender and race. So it was with some surprise that I read in my inbox an email from Vivek linking to a new post of his, which ran on the Washington Post’s webpage.

Vivek prefaced it with the following note:

“I received a request from MSNBC for an interview on air by Ali Velshi immediately after a White House press conference on Trump’s new immigration bill. I expected that the proposed legislation would be as outrageous as Trump’s Muslim ban and that this interview would take me a step closer to a Trump tweet calling me a duffer. But the bill made sense to me. It needs to be revised substantially but is a step in the right direction. U.S. immigration policy is badly in need of an overhaul, and the focus on bringing in people who add to economic growth and competitiveness is good for the country.

“Frankly, I don’t see why the U.S. needs diversity lotteries when it is already diverse, and why immigrants shouldn’t be required to speak English. Centuries ago, it may not have been possible for a person in one country to learn the language of another, but now anyone anywhere can download an app and watch YouTube videos.”

“This article is surely going to create a backlash,” Vivek concluded — “because it goes against the common narrative in the media. But I felt obliged to speak my mind.”

The following column originally ran on the Washington Post.

My first reaction to the headlines about President Trump’s proposal to cut immigration in half was that it would be as disastrous as his Muslim ban. But after reading details of the Reforming American Immigration for Strong Employment Act (RAISE Act), I can’t find a reason to be outraged. The legislation surely needs to be improved, and the numbers of immigrants admitted increased. But it could be good for the country, because it gives preference to the job creators and professionals who have for too long taken a backseat in the debates about comprehensive immigration reform.

The restrictions on families are by no means a good thing, but the focus on bringing in people who contribute to U.S. economic growth surely is.

The president has proposed dramatic changes to U.S. immigration policy, shifting its focus from admitting family members to admitting people based on their skills, English-speaking ability, education, employability, age, achievement and entrepreneurial initiative. At a news conference announcing the bill, Trump adviser Stephen Miller stressed that the families of present immigrants would be grandfathered in under the new rules, but indicated that future immigrants would not be able to sponsor adult children or siblings unless they met the new requirements.

The restrictions on families are by no means a good thing, but the focus on bringing in people who contribute to U.S. economic growth surely is. And as far as learning English goes, almost anyone anywhere can now download language-learning apps and watch videos on their smartphones; immigrants should come prepared.

READ MORE: Analysis: Would the U.S. benefit from a merit-based immigration system?

The United States has been experiencing an exodus of highly skilled workers who were frustrated by an immigration system that put them at a disadvantage. This helped other countries gain a competitive advantage. Chinese internet companies, such as Alibaba, Baidu and Tencent, are among the most innovative and valuable companies in the world. Chinese scientists are building advanced artificial intelligence and gene-editing technologies. Indian engineers are launching sophisticated rockets and creating new platforms for digital currencies. And if you look at the “unicorns,” technology startup firms valued at $1 billion or more, you see that China and India are home to one-third of them, although as recently as 2000, nearly all of them were in the United States, leaving other countries only dreaming of creating a Google, Amazon or Facebook.

We have been bleeding talent and boosting our global competition while arguing only about the plight of undocumented workers.

Most of these foreign research labs and companies have returnees from the United States in key leadership positions. My research team at Duke and Harvard documented that before the immigrant exodus began, 52 percent of Silicon Valley’s startups had been founded by immigrants — and that U.S. immigration policies led this to fall to 44 percent. This was because we were admitting large numbers of workers and students on temporary visas such as the H-1B, but not providing enough green cards. By my estimate, as many as 1.5 million skilled workers and their families are waiting for green cards in the United States today, but we admit only 120,000 workers every year in the top three employment-based categories of permanent-resident visas. So highly skilled workers are leaving.

We have been bleeding talent and boosting our global competition while arguing only about the plight of undocumented workers. It makes sense to solve the relatively easy problems first and then address the ultra-contentious issues of illegal immigration.

The proposal that Trump presented is supposedly based on the merit-based immigration systems of Canada and Australia and similar to what President George W. Bush had proposed in 2007 in a comprehensive immigration reform bill that didn’t make it through the Senate. The same debates are likely break out again, with political leaders on both sides objecting to the exclusion of legal, low-skilled immigrants, who are crucial to the economies of such states as South Carolina.

We need both skilled and unskilled workers as well as musicians and artists, and one way to resolve the issue may be to expand temporary visa programs for low-skilled workers and to value soft skills more highly in the new system. Of critical importance also is to provide permanent residency to the more than 1 million undocumented immigrants who arrived in the United States as children. Of these, 750,000 received work permits and deportation relief through the Deferred Action for Childhood Arrivals policy that President Barack Obama created. Their security in being able to remain is a human rights issue and, as I have previously written, concerns America’s very soul.

Today the most important challenge is for the United States to maintain its global competitiveness — and create new jobs for Americans. This is what immigration can do.

I expect that the debates in the House and the Senate will lead to significant improvements in the RAISE Act, though its passage is far from guaranteed. But with the new focus on skilled immigration, the president has made an important change to the subject of the debate. U.S. immigration is badly in need of modernization. Visas such as the diversity visa, which Trump is also seeking to eliminate, made sense a few decades ago when the United States truly did lack diversity, but today the most important challenge is for the United States to maintain its global competitiveness — and create new jobs for Americans. This is what immigration can do.

Left: President Donald Trump speaks during an announcement on immigration reform. Entrepreneur Vivek Wadhwa says the RAISE Act could be good for the country. Photo by Carlos Barria/Reuters