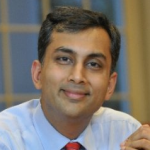 Column: Why we are all insurance companies

Editor’s Note: The famous insurance-philosophy nexus. OK, you’ve never heard of it. Well, neither had I. But then along came Harvard Business School professor Mihir Desai and his new book, “The Wisdom of Finance,” from which I learned that Charles Peirce, the 19th-century founder of “pragmatism,” was a statistics maven who formulated his philosophy on the basis of probability and risk.

Desai’s book chronicles a host of other links between high-brow culture and low-down finance  — Lizzie Bennett rolling the dice by spurning Mr. Collins’ economic security marriage pitch in “Pride and Prejudice”; the principal-agent problem as illustrated by Mel Brooks’ “The Producers.” To the accompaniment of movie clips, Desai runs through many such links in tonight’s NewsHour Making Sen$e segment as he tries to rescue the reputation of finance, so vividly tarnished by based-on-real life characters like Jordan Belfort in “The Wolf of Wall Street,”who also makes a cameo appearance in tonight’s piece.

But back to Peirce and insurance. It’s where Desai begins his book. And where he begins his day with us here at Making Sen$e.

“We are all insurance companies.”

What? How could our humanity be compared to something as mundane as insurance? Can our lives meaningfully be defined by a concept from finance? This odd dictum, from the famous American philosopher Charles Sanders Peirce, that likens us to insurance companies may serve us well as we struggle to find the best path forward in the health insurance debate. With the American Health Care Act passing the House, the Senate struggling to pass their own bill and the Affordable Care Act seeming more and more fragile, politicians and citizens are struggling to find the right way to think about the role of insurance in our society. The usefulness of Peirce’s linkage between a financial concept and our humanity is also representative of how finance can be considerably more humane than usually assumed.

Peirce, a remarkable polymath, is acknowledged as a founder of semiotics (the theory of signs that undergirds much of modern literary theory), pragmatism (the philosophical tradition that emphasizes practical application) and the randomized trial (the practice of ensuring unbiased test results through the use of randomization). But throughout his career he was preoccupied with the idea of insurance. In a lecture series that William James sponsored at Harvard in 1903, he alienated his audience and his sponsor by using calculus in his first lecture to demonstrate how insurance is priced. James, never a fan of math, regretted making the invitation and concluded that Peirce was a “desultory intellect.”

But Peirce was on to something. According to historian of probability Ian Hacking, Peirce was a critical figure as he brought together two seemingly contradictory ideas. Chance and randomness were everywhere — any one coin toss was uncertain — but so were patterns — flip enough coins and you can tell if a coin is fair. Indeed, Peirce is also credited with naming the bell-shaped distribution of outcomes that is remarkably prevalent in nature as the “normal” distribution. Others who had noticed the dominance of the bell-shaped distribution had concluded that outcomes were deterministic because of how prevalent that distribution was. It’s just how things were; nothing you could do about it. For Peirce, however, randomness didn’t mean utter chaos and the normal distribution didn’t mean determinism. There was a subtle middle ground — randomness and patterns could coexist, and patterns could be used to navigate the randomness. But how could one figure out those patterns?  How could one manage in the chaos? That’s where insurance came into the picture and, therefore, the field of finance.

READ MORE: Column: For older Americans, the GOP health bills would be nothing short of devastating

Peirce gravitated toward insurance, because he understood the parallels between the problems facing insurance companies and humans. Patterns are critical to insurers as they enable them to price their policies correctly and stay in business. For example, only by figuring out average mortality could an life insurer stay in business.  And the only way to grasp those patterns was to gather data and “sample” from the experience of the world. That’s why sampling the world was precisely what Peirce recommended as the foundation of pragmatism. Introspection should give way to experiential learning, he thought. Just as insurers can’t divine your expected lifespan, but instead must consult actuarial tables based on data, so too must individuals experience the world to arrive at the appropriate decisions.

Death makes the number of our risks, of our inferences, finite, and so makes their mean result uncertain. The very idea of probability and of reasoning rests on the assumption that this number is indefinitely great. We are thus landed in the same difficulty as before, and I can see but one solution of it . . . logicality inexorably requires that our interests shall not be limited. They must not stop at our own fate, but must embrace the whole community. This community, again, must not be limited, but must extend to all races of beings with whom we can come into immediate or mediate intellectual relation. It must reach, however vaguely, beyond this geological epoch, beyond all bounds … Logic is rooted in the social principle. To be logical, men should not be selfish.

In other words, empathy was the logical extension of the importance of experience gathering.

Peirce was reacting against the spread of social Darwinism, which used scientific ideas to conclude precisely the opposite: the “survival of the fittest.” Today’s battle over insurance similarly pits those with Darwinistic impulses against those with communal impulses. As Congressman Mo Brooks, Republican of Alabama, put it:

[The AHCA] will allow insurance companies to require people who have higher health care costs to contribute more to the insurance pool that helps offset all these costs, thereby reducing the cost to those people who lead good lives, they’re healthy, they’ve done the things to keep their bodies health. And right now, those are the people who have done things the right way that are seeing their costs skyrocketing.

In other words, people shouldn’t be saddled with the costs of insuring those less fit than themselves. One could hardly express social Darwinism applied to insurance any better.

Ultimately, Peirce is closer to the true spirit of insurance than Representative Brooks. Socializing risk is the most central aspect of insurance — the only question is amongst whom should the risk be socialized. And it has always been so. Roman burial societies socialized risks of funeral costs amongst veterans, tontine bonds socialized longevity risks amongst French citizens in the 18th century, and the early forms of disability insurance were created by fraternal organizations. Insurance demands the pooling of risks, and pooling implies sharing that risk. When we begin to partition populations and suggest that risk shouldn’t be pooled, we as a society are saying that those people we exclude are not similar enough to us to pool risks with. And, that statement goes to the core of who we as a people are.

The health care debate is fraught with meaning both because of our personal experiences with the health care system and because it calls into question who we are as a people. Amongst whom should these risks be shared? How should we incorporate the experiences of others into our lives? Hopefully, we will conclude that the imperatives of experience gathering and empathy that Peirce saw embodied in insurance will guide us as we make these decisions. Because, ultimately, “we are all insurance companies.”

Left: An odd dictum that likens us to insurance companies may serve us well as we struggle to find the best path forward in the health insurance debate, writes Mihir Desai, author of "The Wisdom of Finance." Photo by Gus Ruelas/Reuters

Mihir A. Desai is the author of "The Wisdom of Finance: Discovering Humanity in the World of Risk and Return" and a professor of finance at Harvard Business School and Harvard Law School.