Column: What Italy’s referendum means for the European Union

This weekend, Italians will vote on constitutional changes proposed by Prime Minister Matteo Renzi. And although the vote is technically about reforms the 41-year-old former Mayor of Florence wants to implement, Italians no longer see it that way. It’s now a vote about the nation, its leadership and possibly even its future relationship with Europe. Anti-establishment populists have rallied the citizenry against Renzi and the governing elites. This Sunday’s vote, The Economist notes, is effectively a “Renzi-ferendum.”

The irony is that Renzi rose to power on a promise to radically reform the Italian government. But even before he was elected Prime Minister in 2014, he was known as “Il Rottamatore,” meaning “The Demolition Man,” of Italian politics. He earned the nickname by incessantly lampooning the government and pledging to upend the country’s political establishment. Today, he’s deemed part of the establishment.

Believing institutional paralysis to be one of Italy’s biggest problems, Renzi is trying to improve the country’s governability by assuring greater political stability and streamlining the legislative process. Specifically, Renzi’s plan would reduce the size and authority of the Senate, clarify responsibilities in areas where regional and central government jurisdictions overlap and remove a layer of local government.

Renzi’s announcement that he would resign if the referendum failed changed the dynamics around the upcoming vote. It went from being about the reforms to being about him.

In part because of the Senate’s existing powers, the country has had 63 governments in the last 70 years (and no, that’s not a typo). But, as The Economist notes, “the mayfly-like lifespans of Italian governments is not the sole reason” that it is difficult to govern Italy. Legislative gridlock is another.

Because of equal powers given to both houses in the parliament, legislation can bounce between the two bodies until it is approved in identical form. It’s not unusual for bills to be debated for years. For example, a bill that makes torture an offense has been discussed in the Italian parliament for 27 years, most recently in July.

Given these dynamics, you might imagine support for the reforms would be strong. You’d be mistaken.

Renzi’s announcement that he would resign if the referendum failed changed the dynamics around the upcoming vote. It went from being about the reforms to being about him. One poll cited by The Guardian found “only 40% of Italians say they will vote on the reform package; 56% consider their vote to be more a verdict on the prime minister, his government and, by implication, the state of the nation.” 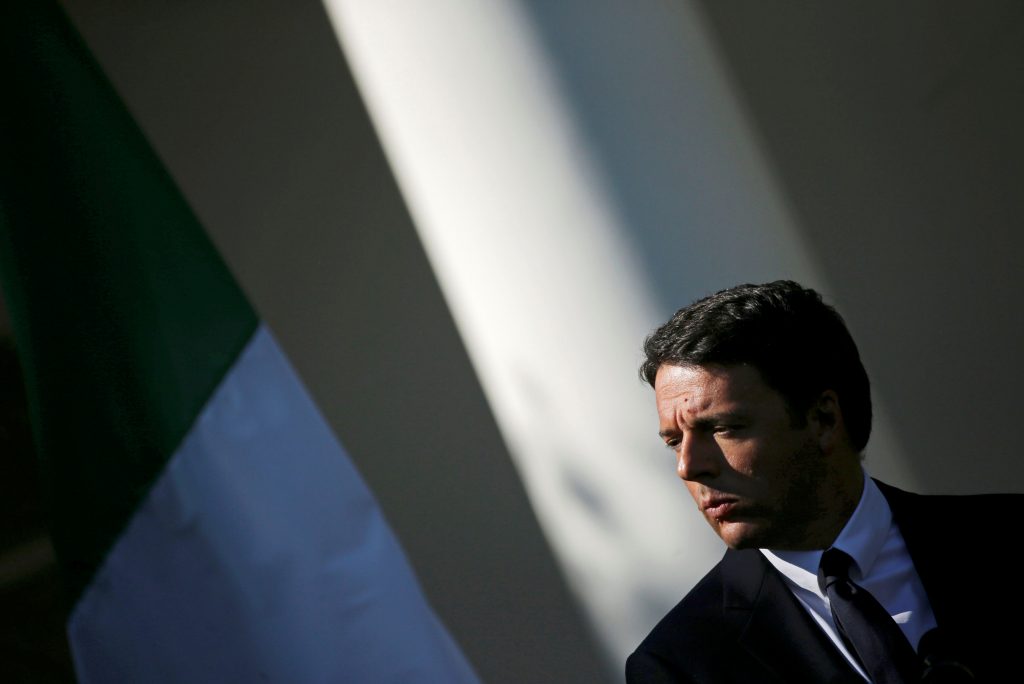 Further, Mario Margiocco asserts “to vote ‘no’ is to vote against the system and all its corruption…and who isn’t against corruption?” Even The Economist, citing risks to the emergence of a unaccountable strongman, advised, “No is how Italians should vote.” The last poll published before the vote indicated 55 percent opposition to the reforms.

The economy isn’t helping Renzi’s cause. The country’s GDP is smaller than it was before the financial crisis. But because of population growth, GDP per capita is today roughly where it was in the late 1990s. Employment levels in Italy are the second lowest in Europe, slightly better than Greece, and the country’s debt-to-GDP ratio is above 130 percent. And the banking industry, Europe’s fourth largest, is teetering under $400 billion of problem loans, equivalent to more than 20 percent of the country’s GDP. At one point earlier this year, Monte dei Paschi di Siena, the world’s oldest bank, had problem loans of more than 50 times its market capitalization. The overhang of bad loans is starving Italian entrepreneurs and small business owners of capital they need to grow.

There’s also the migrant crisis. According to the UN refugee agency and the Italian government, more than 170,000 asylum seekers have reached Italy by boat so far this year, exceeding the standing record set in 2014. One reason for the recent surge, notes The Guardian, is that greater Turkish policing and aggressive deportation threats by Greek officials have resulted in “the Italian route once again becoming the main migrant gateway into Europe.”

Unsurprisingly, the combination of economic malaise and record migrant inflows is bolstering populists. Two groups in particular stand to win if Renzi loses: the populist Five Star Movement and the anti-immigrant Northern League. Both are anti-establishment organizations that question the value Italy receives from being part of the European Monetary Union or from using the euro as its currency. As a result of this setup, the stakes of the December 4th vote are enormous. A Renzi defeat may affect Italy’s future relationship with Brussels.

Could this weekend’s vote lead to Italy’s exit from the European Union and a reversion to the lira? The logic is straightforward: Renzi loses, anti-establishment parties come to power, Italy exits. A believable story, for sure. Because of these dynamics, my friend John Mauldin has said “a ‘no’ vote would be the death knell for the euro.” And if you believe, as I do, that Europeans will ultimately choose individual countries with their own currencies instead of opting to join the United States of Europe, then a Renzi loss might help speed along an already unfolding process.

Could this weekend’s vote lead to Italy’s exit from the European Union and a reversion to the lira?

But on the other hand, it’s also possible that a ‘no’ vote doesn’t directly affect the euro’s short-term viability. A poll published earlier this month found that only 15.2 percent of Italians were in favor of leaving the single currency, “with 67.4% declaring themselves true single currency believers.” Although our recent experience with polls in the United States and the United Kingdom may lead us to skeptically interpret their conclusions, our prior faith in polls was based on their historical accuracy. It would be foolish to dismiss the data entirely.

If the referendum fails to pass and Renzi resigns, one thing is certain — market volatility and political uncertainty will increase. One report suggests that investor confidence would plunge, and up to eight Italian banks might fail if the reforms are rejected. The fear might spread to Europe more generally, leading to a materially weaker euro as capital flees the continent. If this happens, the U.S. dollar would likely strengthen. And Italy might call for an early election next year, creating a situation in which, as noted by Bloomberg, “governments accounting for more than 75% of the euro area GDP would be in play in just one year.”

A Renzi victory, on the other hand, might turn the anti-globalization tide and help Italy attract much needed capital for its banks and economy. It might even deter citizens of France, Austria and other countries from voting in populist leaders. As for the currency impact, that is less clear.

In either case, the hard work of reforming the Italian system (and fixing Europe) still lies ahead.

Left: A man holds a banner reading "I say no" during a march in support of the 'No' vote in the upcoming constitutional reform referendum in Rome, Italy on Nov. 26, 2016. Photo by Alessandro Bianchi/Reuters