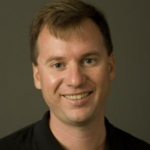 Column: Markets were wary of a Trump presidency. What changed?

Prior to the 2016 presidential election, financial markets reacted to election news as if they were dreading the prospect of a Trump presidency. When events moved the electoral probabilities in Clinton’s favor, global stock markets rallied, and markets fell when events moved the odds in Trump’s favor (Table 1). Economist Justin Wolfers and I discussed these movements in a working paper and I elaborated on them in a piece on Making Sen$e. On election night, markets moved consistently: rallying when early returns favored Clinton and then plummeting when it became clear Trump was the winner. 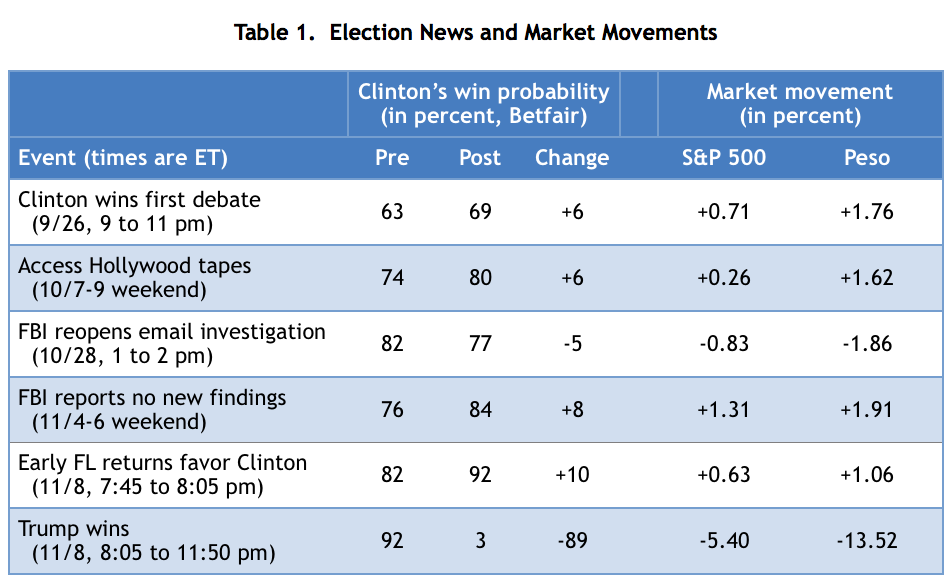 Beginning around the opening of European markets at 2 a.m. on Wednesday morning, markets appeared to change their mind about President-elect Trump (Figure 1). U.S. and European stocks retraced their initial declines on Tuesday night and actually closed up on Wednesday. Right now, just over three weeks into the transition, the recovery in U.S. stocks has held, and the S&P 500 is up about 2.5 percent from its pre-election close. The S&P 500 being worth about 2 percent more under a Republican president is completely consistent with my past work with Wolfers and Erik Snowberg on market reactions to presidential elections. The market appears to have shifted in a few hours from viewing Trump as a threat to the global economy to viewing him as a typical Republican. 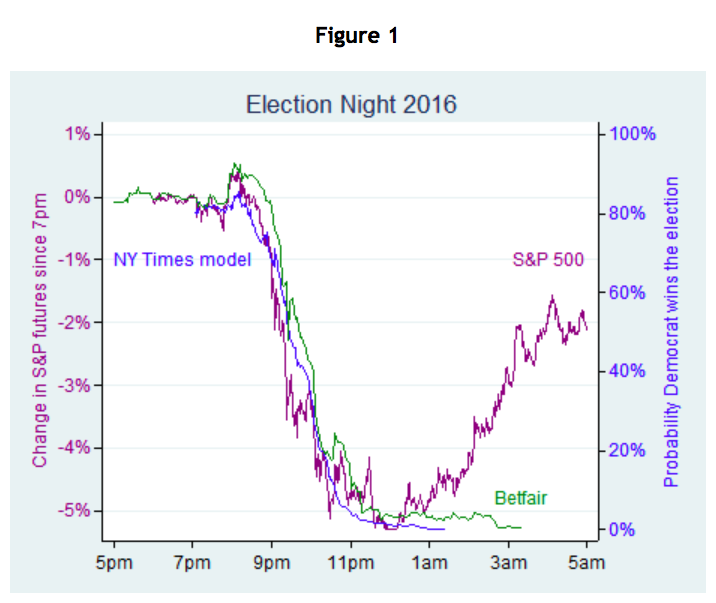 Why did investors’ expectations of a Trump presidency change so sharply and (thus far) so enduringly on Wednesday morning? Before tackling that question, I want to make two points about the pre- and post-election market movements.

First, it is not that unusual for off-hours markets to react differently from day-time markets to the same news. The pre- and immediately post-election market movements reflected an aggregation of the opinion of a subset of global investors. These traders have very strong incentives to correctly anticipate day-time traders’ reaction. The evidence suggests that they get it right on average, but with a fair amount of error. In the last eight years, there have been 30 days when the S&P 500 has moved 3 percent or more after hours. About 20 percent of the time, that move has completely reversed by the next day close; another 20 percent of the time, it has more than doubled.

We can therefore view analysis of pre-election market reactions as a bit like a poll – they reflect a sample of opinion, which gives us a hopefully unbiased but of course not perfectly accurate view of the opinion of the full population. Just as the only way to learn the full voting population’s voting intentions is to hold an election, the only way to learn the full investing population’s view of a Trump presidency is to wake them up on Wednesday morning and confront them with the news.

Second, investors actually changed their minds about some aspects of a Trump presidency, but not others. Table 2 reports the pre-election reaction to the FBI letter reopening the Clinton email investigation (which is the most useful of the pre-election events as it occurred during regular U.S. trading hours) and the reaction to Trump’s election over three time horizons: the election night reaction, the reaction as of the next-day close and the cumulative reaction as of Dec. 2, 2016.

Table 2. Pre-election reaction to the FBI letter vs. immediate and longer-run reactions to the election 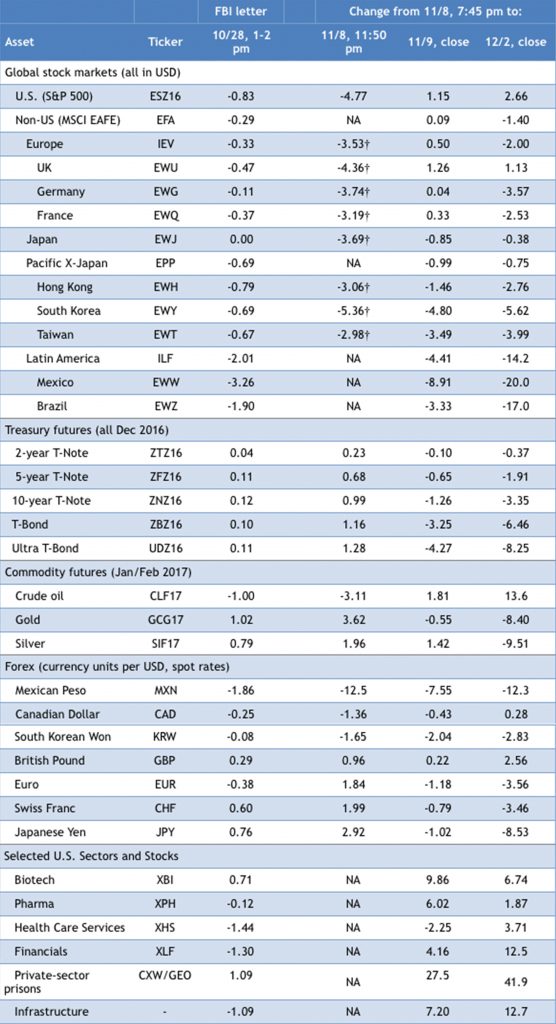 Five-letter tickers are for specific futures contracts; three letter tickers are for the relevant exchange traded funds or stocks or are ISO codes in the case of foreign currencies. The “private sector prisons” sectors is proxied for by an equal-weighted average of the two stocks given; “infrastructure” is proxied by a capitalization-weighted average of U.S. stocks in the GICS category for Industrial Construction. For assets tracked by ETFs and stocks, election-night return windows begin at 4 p.m. on Nov. 8 rather than 7:45 p.m. For foreign stock indices, the Tuesday night returns marked with a † are from spot index changes (for Asia) or index futures (for Europe) for the closest available window, converted from local currency to U.S. dollars.

The pattern of movements in the first two windows (the reaction to the FBI letter and immediate reaction to Trump’s win) are quite consistent with one another, although the magnitudes in the second window are naturally much larger, since they are reactions to a Trump win, rather than just an increase in his odds of winning. The movements in the second two windows are likewise fairly consistent — markets’ first-day reactions to Trump’s win have so far persisted. What is interesting is the similarities and differences between the two pairs of windows.

For example, the pre- and immediately post-election view that a Trump presidency would be bad for Latin American and East Asian stocks and currencies appears to have held up well post-election. Moreover, many sectors that Trump was expected to be especially good for biotech, pharmaceuticals, private-sector prisons have outperformed the market, while those that his election has expected to harm (HMOs) have underperformed.

What did the market change its mind about Trump’s effect on? An even bigger surprise than the Wednesday rally in U.S. and European stocks was the spike in Treasury yields. Treasury yields fell initially when Trump won on Tuesday night. But on Wednesday they rose sharply, especially for longer maturities. The 30-year Treasury yield jumped from 2.63 to 2.88 percent, its largest one-day increase since 1996. By Dec. 2, the 30-year yield had reached 3.06. (The futures prices shown in Table 2 moved in the opposite direction.)

Prior to the election, Trump advocated an unusual mixture of populist and pro-business policies. Populist policies like protectionism would likely be especially bad for export-oriented emerging markets, but also contractionary for the global economy and bad for the profits of the S&P 500. In contrast, policies like corporate tax cuts and infrastructure spending might be bad for the deficit, but are very likely expansionary and good for profits. Given that his supporters told us to take Trump “seriously, but not literally,” there was probably more uncertainty than normal on election night about which of his promises would turn out to be priorities.

The market movements on Wednesday morning are consistent with a shift in the expected mix of Trump’s policies. Many have attributed the recovery at least partly to the magnanimity of Trump’s 3 a.m. victory speech. I would put more emphasis on the fact that the speech mentioned one and only one policy priority: infrastructure spending.

In addition, it is possible that the market’s recovery itself affected the mix of policies expected from Trump. Suppose markets had crashed and then remained at low levels after Trump’s election. This probably would have reduced his ability to pass legislation, but it would have had less effect on his ability to act unilaterally. Indeed, it might even have encouraged Trump to substitute unilateral for legislative action, as President Obama began doing in 2014.

Others (including Wolfers) have pointed out that the President has significant ability to unilaterally disrupt trade agreements if he chooses to, but tax cuts or new spending requires Congressional cooperation. Thus the market rally on Wednesday morning may have shifted Trump’s policy mix towards more expansionary policy, reinforcing the rally. These feedback effects may be stronger than typical due to Trump’s unusual mix of pro and anti-S&P 500 proposals, an unusual level of uncertainty about which of his pre-election proposals he will seek to implement, and a belief among at least some investors that the economy could benefit from further fiscal stimulus.

Of course, it is hard to be certain of these feedback effects since we will (fortunately) never observe the counterfactual of a post-crash President-elect Trump. I at least have been mildly surprised by the level of promised cooperation Trump has received from Congress on tax cuts and infrastructure spending, as well as the limited attention given to protectionism. The highest-profile protectionism Trump has pursued has come in a profit-friendly (albeit deficit-unfriendly) form, namely inducing Carrier to keep jobs in the U.S. with subsidies rather than trade barriers.

Were the pre-election and election night markets wrong to be so pessimistic about Trump? Is the current, more sanguine view the correct one? As an investor, citizen and (in case you were wondering) political independent, I certainly hope so. Time will tell.

Left: Traders work on the floor of the New York Stock Exchange the day after the U.S. presidential election on Nov. 9, 2016. Were the pre-election and election night markets wrong to be so pessimistic about Trump? Photo by Brendan McDermid/Reuters

Eric Zitzewitz is a professor of economics at Dartmouth College.