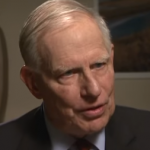 Column: Why we need to rewrite our tax code from scratch

Editor’s Note: The following excerpt is from “A Fine Mess: A Global Quest for a Simpler, Fairer, and More Efficient Tax System” by T. R. Reid. For more, watch economics correspondent Paul Solman’s conversation with Reid below and read his extended conversation with the author here.

Ah, the blithe joys of springtime in the United States of America: azaleas in bloom at the Masters, school trips to the state capital, big sales at the garden stores, baseball’s opening day, picnics in the park on bright, breezy April afternoons — and the ordeal of Form 1040, with instructions like this one from the Internal Revenue Service: “If you determined your tax in the earlier year by using the Schedule D Tax Worksheet, or the Qualified Dividends and Capital Gain Tax Worksheet, and you receive a refund in 2016 of a deduction claimed in that year, you will have to recompute your tax for the earlier year to determine if the recovery must be included in your income.”

As we’ve seen in other countries, the way to bring about fundamental change in a dysfunctional tax code is to start over — to rewrite from scratch.

The U.S. tax code often seems to be at war with the taxpayers. The tax law has become so stuffed with obscure provisions that were important to some group or other at some point in time that the mess just becomes too difficult for anybody to understand or to manage. The resulting complexity — made worse by the so‑called anti-complexity clause that Congress threw into the stew some years back — has reached absurd dimensions. When I asked the commissioner of the IRS whether anybody in his agency has read all 73,000 pages of IRS regulations, he laughed at the very suggestion.

At the same time, the tax code often seems to be at war with itself. There are many provisions, for example, that provide benefits or preferences for families that have a child. The problem is that the different sections of the Internal Revenue Code can’t agree on what constitutes a “child” for tax purposes. There’s a “child credit” in the personal income tax that applies to any person under the age of 17. But there’s also a separate “child and dependent care credit,” which defines a “child” as somebody under 13. For families getting the earned income tax credit (that’s the reverse income tax that sends checks to taxpayers who have low-paying jobs), a “child” is any person under 19 — unless the person is a full-time student, in which case a “child” is anybody under 24. Every time Congress decides to give a tax break for having a child, it just picks some definition of “child” and stuffs that language into the tax code, regardless of how many other designations of “child” have been stuffed in the code somewhere else.

Watch economics correspondent Paul Solman’s conversation with T.R. Reid about how the U.S. could improve its tax system.

This has been going on since the birth of the federal income tax a century ago. And history has shown that every three decades or so the tax code becomes so huge and complicated and contradictory that the only way to fix it is to scrap the whole mess and start over. By looking at other industrialized democracies that have faced the same tax questions we’re dealing with, we can decide what should be in this new tax code and what should not. That’s why the U.S. Treasury secretary in 1984, Donald Regan, dispatched his policy experts to look at other systems and bring back the best ideas — a process that ended with the dramatic tax changes of 1986, widely recognized as the most sweeping, and most admired, reform in the history of the U.S. tax code.

Here at home, our political leaders talk about fixing the tax code all the time. But their proposals involve incremental change to the existing system, and incremental change, over the decades, is what got us into the fine mess we’re stuck with today. These approaches to tax reform, including the plans we heard during the 2016 presidential campaign, all suffer from the same problem: They’re too timid.

They all have a rearranging-the-deck-chairs quality at a time when the whole structure is sinking from its own weight. As we’ve seen in other countries, the way to bring about fundamental change in a dysfunctional tax code is to start over — to rewrite from scratch.

“You can’t just tinker … Facing a huge, almost incomprehensible system, you have to take it on. Your goal has to be to fix the whole damn thing.”

The New Zealand parliamentarian Maurice McTigue explained why his country was able to scrap a decrepit, inequitable, inefficient tax code and replace it with a system that has won plaudits from tax experts everywhere. “A key reason was that we did it big,” McTigue said. “They changed almost everything at once. And that’s an important lesson: if you’re going to do tax reform, you’d better make it a large reform. That way, for every change a taxpayer doesn’t like, there’s something else in he package that he wants.”

It’s the same conclusion the former senator Bill Bradley drew from our country’s successful revamp of the Internal Revenue Code in 1986. “You can’t just tinker,” Bradley said then. “Facing a huge, almost incomprehensible system, you have to take it on. Your goal has to be to fix the whole damn thing.”

Left: As we’ve seen in other countries, the way to bring about fundamental change in a dysfunctional tax code is to start over — to rewrite from scratch, writes T.R. Reid, author of "A Fine Mess." Photo by Ida Hollis via Getty Images

T.R. Reid is a longtime correspondent for The Washington Post. He is the author of "The Healing of America," "The United States of Europe" and "A Fine Mess: A Global Quest for a Simpler, Fairer, and More Efficient Tax System."