Burnham, a former Harvard Business School professor, money manager, biotech entrepreneur and author, has regularly shared his views on the Dow (predicting that it would hit to 5,000 before 20,000) and the Federal Reserve (arguing that it should abolished) with Making Sen$e. His fearful articles caused business and economics correspondent Paul Solman to label Burnham the “Chicken Little of Finance.”

Burnham has embraced the Chicken Little moniker, revealing his own investment positions in April. Below, Burnham discusses his macroeconomic views, specifically Chicken Little’s perspective on government economic policy, which is key to his investment strategies. In December, he’ll share his investment decisions once again.

“An ounce of prevention is worth a pound of cure.” So reads a vintage cigarette ad. For decades, cigarettes were sold as healthy supplements. “Doctor-recommended” smoking purportedly improved digestion, soothed throats and sharpened the mind. We now view smoking as the leading avoidable killer of people.

In the case of cigarettes, a purported medicinal supplement has been revealed to be poison. Similarly, I believe the government actions to “support” the economy are actually causing problems.

I believe that all three of the pillars of economic “support” actually decrease wealth.

The average government debt level in the Organisation for Economic Co-operation and Development has climbed from 53 percent of GDP in 2007 to over 80 percent in 2015. I continue to believe that spending more than one earns is not a path to prosperity. 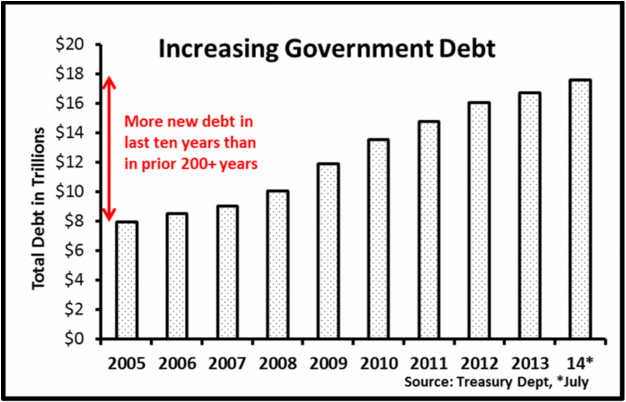 U.S. government debt has expanded at an historic pace over the last decade. © Terry Burnham

Too much debt was a central cause of the financial crises, but the government solution to this problem has been to create even more debt. This makes the system less stable, not more stable.

There’s a notion that Chinese government mandated spending will help the world economy. The logic of this view is that when the Chinese government spends money to, say, build a new city, it employs thousands of workers. Those workers have money to spend, and when they buy goods and services, the sellers then have more money to spend and so on. This is known as the Keynesian multiplier.

The trouble with this view of government spending, Chinese or non-Chinese, is that it does not take into account the value of what is produced compared to what could have been produced with the same expenditure.

In China, trillions of dollars have been invested without regard to the value of the projects. Ghost towns and excess production make people poorer both in China and elsewhere.

If one just focuses on workers’ pay, then building useless projects may appear to help the economy, but all in all, it is just a waste. If building empty highways makes a country richer, so would blowing up existing highways and repairing them. No one is fooled into thinking blowing up existing projects is good, but some are fooled by looking at new, useless projects. The Chinese problem is that the government is picking the projects and all too often picking the wrong projects.

Beyond wasting money directly, Chinese investment hurts others. For example, Alcoa, a U.S.-based multinational company that makes aluminum, is one of many of companies that have suffered as a consequence of China’s misdirected investment. China has continued to invest in aluminum production, even though the financial returns to these investments have been low or negative. Nonetheless, these investments have created severe competition for Alcoa — so much so that Alcoa’s stock price has declined by 90 percent since 2007. The company was kicked out of the Dow Jones Industrial Average and will now morph into two entities. Alcoa was an industrial giant. Now, it ceases to exist in its prior form.

There are hundreds of similar stories.

While government overspending and Chinese financial mistakes are terribly costly, loose money might be the worst government economic policy. Monetary policy is particularly destructive in that its negative effects are delayed and misunderstood.

Consider the impact of low interest rates on housing and savers. Mortgage rates have dropped from above 6 percent in 2007 to around 4 percent today. People who refinance their loans at lower rates spend fewer dollars on mortgage payments each month and consequently, have more to spend on cars and other items. Similarly, new home buyers are able to pay more for houses with a 4 percent mortgage than they could under the same circumstances with a 6 percent mortgage. Lower mortgage rates have helped U.S. housing prices rise in recent years.

Lower mortgage payments are great for borrowers. However, every dollar saved by a borrower is a dollar not received by a lender. The most important impact of lower rates is not wealth creation, but the transfer of wealth from savers to borrowers.  Low rates are terrible for savers.

Why one economist isn’t running with the bulls: Dow 5,000 remains closer than you think

If there is a saving loser for (almost) every borrowing winner, why aren’t savers “mad as hell”? While there is some expressed anger at the negative impact of Federal Reserve policies on senior citizens, on balance, the public seems to support low rates.

One barrier to recognizing the cost of loose money is that some savers benefit in the short-run from low rates. In particular, savers who own bonds see them go up in price when interest rates go down. Consider, for example, the 30-year Treasury bond sold on May 15, 2007 (one of the last 30-year auctions conducted before the beginning of super loose money). This 30-year bond pays 5 percent a year in interest. Any saver who owns this bond has seen its value increase by 40 percent since issue. (To see the current price of this bond, search for “912810PU6” on this long list of Treasury security prices.)

So borrowers are happy with low mortgage payments, and savers may be fooled by the rise in value of the bonds they own. The fact that bond prices have gone up in recent years cannot, however, hide the depressing set of options available to savers today. The 30-year Treasury currently returns about 3 percent, and bank deposits pay 0 percent.

What is net impact of loose money? I believe it is negative. There may be some stimulation as, for example, some houses are built that wouldn’t have otherwise been built. However, loose money also destroys wealth, because altering prices leads to bad decisions.

Consider the impact of Federal Reserve Policy on drilling for oil in the Arctic. During the Fed’s program of quantitative easing, oil prices rose from under $50 a barrel to over $100. Assuming relatively high oil prices, Shell invested over $4 billion in Arctic drilling. Yet, after the end of quantitative easing, oil prices declined to below $50 again. Shell canceled its Arctic effort  and wasted $4 billion.

While many of us are happy to see less Arctic drilling, we would all be richer if the $4 billion had not simply been thrown away. There are billions of decisions that have been distorted by the central bank’s policies, and the total cost may run to the trillions of dollars.

Many economists describe the gradual reduction of Federal Reserve money creation as a “taper.” Up until recently, I have never seen a Federal Reserve official use the word. Why not? My guess is the government does not want to equate loose money with the more common usage of taper in the context of illegal drugs.

“If it looks like a duck, acts like a duck, and it sounds like a duck, it’s probably not a chicken.” So said Wall Street trader Peter Borish. Low interest rates are like a drug in causing short-term stimulation and long-term stagnation.

I am Chicken Little cowering in fear, because I believe that current government economic policies are poisonous. I believe the sky will fall in the form of declining financial markets and a bad economy.