Most people see last week’s “Trump stock market rally” as an endorsement of the president’s economic policies. President Donald Trump has made exactly this claim: that the stock market’s rally was a validation of his decisions.

“We just hit a record, and a number that’s never been hit before,” Trump told ABC News in reference to the Dow hitting 20,000. “So I was very honored by that.”

Viewed correctly, however, the stock market’s “Trump bump” is surprisingly small, which indicates it has a negative view of President Trump’s policies.

The reality is the stock market’s “Trump bump” is surprisingly small, which indicates it has a negative view of President Trump’s policies.

The Trump rally is weak

The stock market has risen close to 10 percent since the election (but has fallen about a percent between Jan. 30 and 31). How is a 10 percent rally a negative statement on President Trump’s policy? The government is going to increase corporate profits almost 15 percent by giving them taxpayer money. The market’s evaluation of the rest of the looming policies (other than corporate tax cuts) is negative 5 percent. Here is the summary:

In broad strokes, the stock market estimates for every $3 the Trump plans give to companies in taxes, $1 is being destroyed by other actions.

Taking your money and giving it to companies

Any dope can make the stock market rally by picking your pocket.

President Trump is likely to vastly decrease the amount of taxes paid by companies. The immediate impact of cutting taxes is not to create wealth, but rather to take money from future taxpayers and give it to companies. Of course, there might be incentive effects of tax cuts, but those are smaller than the immediate impact of boosting corporate profits.

Tax cuts are free money for companies. Because of the tax cuts, the federal deficit and debt will increase; you, your children and your grandchildren are going to repay these debts. 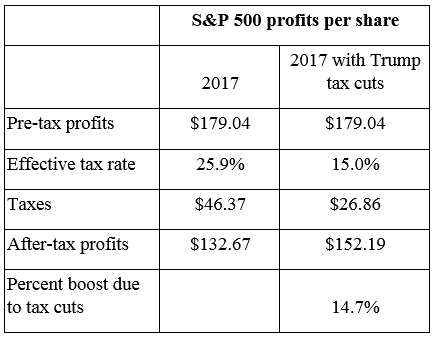 Any dope can make the stock market rally by picking your pocket.

Officially, large U.S. companies currently face a 35 percent tax rate. However, legal tax avoidance reduces this to an “effective” corporate tax rate of about 25 percent. The stock market would have risen by 14.7 percent if the corporate tax rate were to drop from the current effective rate of 25.9 percent to 15 percent as detailed by the Trump plan.

Is the stock market so smart?

Should we listen to the stock market? Probably not.

The stock market is often crazy. It soared during the early part of President Herbert Hoover’s presidency just before the Great Depression. Similarly, stocks rose relentlessly in 2005, 2006, 2007 just before the housing-related collapse.

The stock market is, like many people on Wall Street, frequently wrong, but never in doubt.

The stock market is, like many people on Wall Street, frequently wrong, but never in doubt.

However, if we, like President Trump, seek to use the stock market to evaluate the economy, that evaluation is currently negative.

Left: Traders work on the floor of the New York Stock Exchange on Aug. 21, 2015. Photo by Brendan McDermid/Reuters