The central theme of Donald Trump’s economic policy is trade. He promises to slash America’s trade deficit by tearing up international agreements and imposing massive new tariffs on imports from China (45 percent) and Mexico (35 percent). By cutting the trade deficit from $500 billion to zero, according to his senior economic advisers, $1.74 trillion in new tax revenue will accrue to the Treasury over the next decade. Trump will use this massive windfall to fund two-thirds of his proposed tax cuts. If true, this will indeed go some way toward Making America Great Again.

If produced by a Macro 101 student, this sort of analysis would send his professor into paroxysms of red-pen rage.

But unfortunately it isn’t — not by a long shot. If produced by a Macro 101 student, this sort of analysis would send his professor into paroxysms of red-pen rage.

Trade deficits, you see, do not just disappear and tax revenues soar because you block imports. When the trade deficit goes down, capital inflows from abroad go down with it. And since foreign capital fills the gap between savings and investment at home, savings must rise or investment must fall. This is a basic principle of national income accounting, which all students learn in introductory macroeconomics classes. 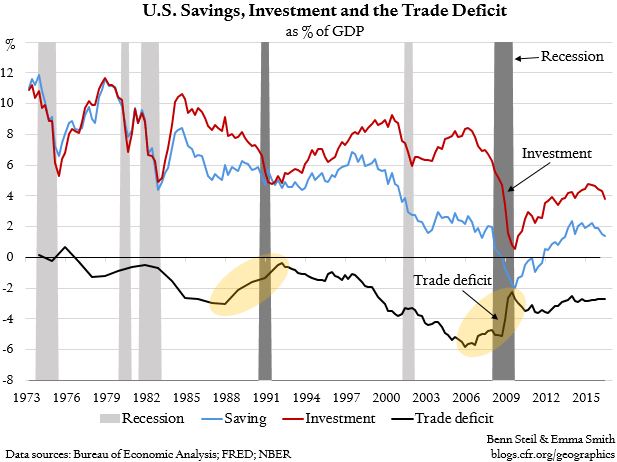 So if savings and investment don’t budge after imports fall — which they don’t in the Trump analysis — then exports must fall by an equivalent amount. The mechanism by which this would happen is simple. The lower demand for non-U.S. currency created by the import cut pushes up the value of the dollar, which makes U.S. exports more expensive and imports cheaper. So imports rise, and exports fall. The trade deficit remains the same.

In short, the idea that protectionism is the road to riches is logically and historically monstrous.

In short, the idea that protectionism is the road to riches is logically and historically monstrous. Trump needs a new big idea.

Editor’s Note: This column was originally posted on the Council on Foreign Relations’s Geo-Graphics economics blog.