Column: What the U.S. dollar’s ups and downs mean for you

Last week, a bleak jobs report shattered expectations of a June rate hike and sent the dollar down 1.6 percent, highlighting the fragility of the Federal Reserve’s plan to normalize monetary policy. Headlines were quick to relate the fortunes of the yen and Japanese stocks, copper and oil and Australian miners to the currency’s moves.

Because of the dollar’s global role as a reserve currency, its ups and downs link seemingly unconnected dynamics. Its movements affect everyone from Japanese investors and British intelligence analysts to Argentinian small business owners and American families. What forces are affecting the greenback — and more importantly, what do the moves mean for you?

The dollar’s movements affect everyone from Japanese investors and British intelligence analysts to Argentinian small business owners and American families.

There are numerous sources of upward pressure on the dollar. For one, the American currency is believed to be a safe haven, so in times of heightened geopolitical or economic uncertainty, global investors park money in U.S. assets such as U.S. Treasury bonds. With concerns mounting in many regions around the world, from the Middle East and Brazil to Europe and China, global capital may turn to the U.S. for safety, increasing demand for dollars and driving the currency to appreciate.

On top of that, the Fed continues to signal it wants to raise rates this year, which would also cause the dollar to appreciate. Why’s that? Because higher interest rates attract international investors, just as savvy depositors move money to savings accounts with the highest yield.

Meanwhile, economic weakness in Europe and Japan means the Bank of Japan and the European Central Bank will likely maintain very accommodative monetary policies for the foreseeable future. This would mean keeping rates lower for longer, continuing unconventional policies, such as quantitative easing, and depressing the euro and the yen relative to the dollar. The flip side of a weak euro and weak yen is a stronger dollar. These devaluations are by no means incidental; they’re an economic strategy. Cheaper currencies make a country’s exports more attractive, boosting growth in local currency terms. If central banks outside the United States continue to lean on currency devaluations to drive their economies, the dollar will rise unless the Fed fights back. 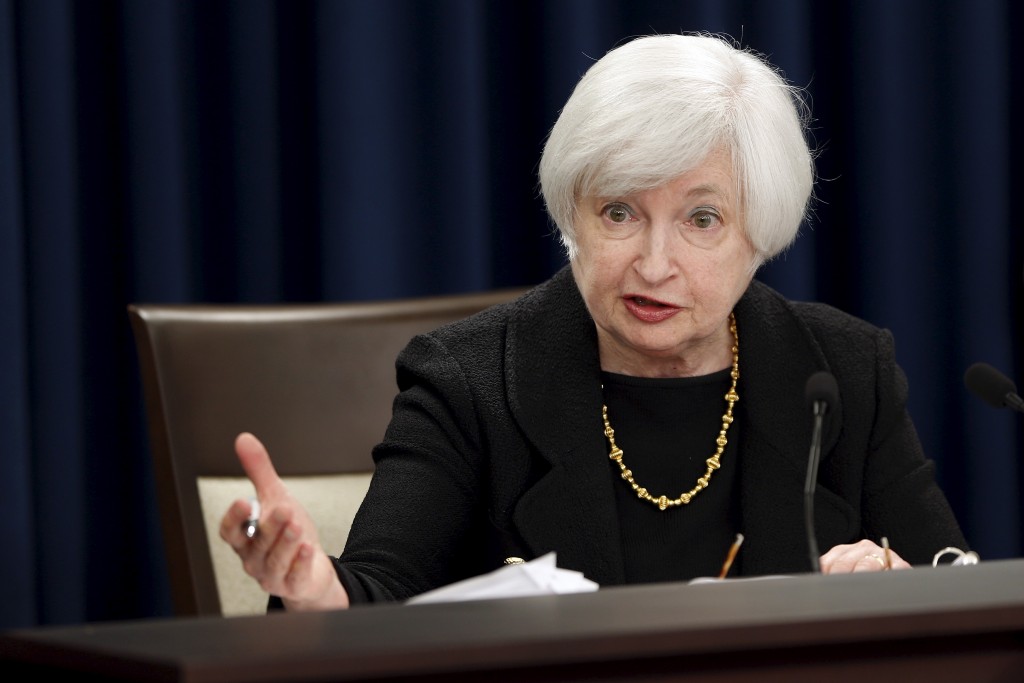 With Federal Reserve Chair Janet Yellen at the helm, the Fed continues to signal it wants to raise rates this year, which would also cause the dollar to appreciate. Photo by Jonathan Ernst/Reuters

What does a stronger dollar mean for you? On the plus side, the stuff we import, such as manufactured goods and commodities, is cheaper. As are overseas vacations. Take a trip to Argentina, and your dollars will buy almost 20 percent more than they did last year. The impact of a strong dollar is deflationary for Americans, because prices in dollar terms tend to fall.

Cheap goods are great for consumers, but the news is not so bright for U.S. exporters. When the greenback appreciates, the cost of American goods sold overseas rises in local currency terms, hurting demand for U.S. exports. A strong dollar shifts inflation to other countries by making their imports more expensive. Currency moves subtracted 4.5 percent from Pepsi’s global revenue at the start of this year, masking a far worse 26 percent decline in Latin America, and Coca-Cola expects exchange rates to take 2 percent or 3 percent from revenues in 2016.

For U.S. exporters, there are some countervailing signs of hope that the dollar could weaken. Declining perceptions of U.S. economic conditions drive down the greenback, as global investors sell their stakes in U.S. companies, bringing the dollar down with them. With a dim jobs report, presidential election uncertainty, low productivity growth and declining corporate profits, the outlook is bleak; indeed, economists are now predicting 2016 to be the slowest year for U.S. growth since 2012. A downturn could force the Fed to push interest rates negative, which would drive down the dollar further.

Thanks to the world-wide web of dollars, what happens on the other side of the globe has direct effects on your wallet.

A challenge to the dollar’s status as the dominant reserve currency would also put downward pressure on the greenback. Today, the dollar accounts for “90 percent of all foreign exchange transactions,” according to Reuters. If a currency like the Chinese yuan meaningfully ate into this share, it would surely lead to dollar weakness. But such a development might also make international trading less volatile, according to New York Fed President William Dudley.

READ MORE: Your guide to China’s devaluation of its currency

What would a weaker dollar mean for you? Overseas vacations, imported manufactured goods and commodities would rise in price. If you’re seeking authentic sushi, for instance, you’ll find it more expensive to visit Japan or dine on flown-in fish, as the dollar has declined more than 10 percent against the yen in the past year.

While this might seem like a drag, it could ultimately be better for the world economy. Rising commodity prices would help support the economies — and political systems — of countries relying on them to be high, supporting growth and stability. Developing countries would benefit as they could more easily handle dollar-denominated debt. And stronger emerging markets mean a stronger world economy. Global growth might accelerate.

The relative strength of the U.S. dollar is not a black-and-white story for the U.S. or the global economy as a whole. In fact, while a strong currency has its perks, a bigger-picture view suggests we may all be better off with a weaker dollar. Thanks to the world-wide web of dollars, what happens on the other side of the globe has direct effects on your wallet.