Communism, Capitalism and the Third Thanksgiving 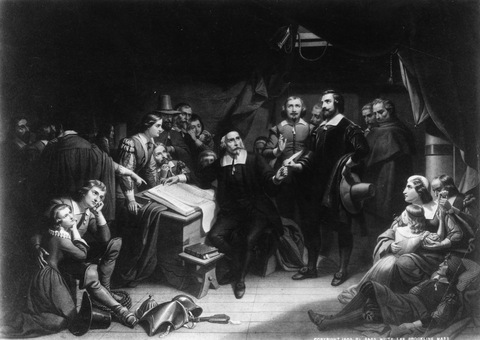 Pilgrim leader William Bradford, later the Governor of Plymouth Colony, reading the Mayflower Compact on board the Mayflower off the coast of what became known as Massachusetts, 1620. Photo by MPI/Stringer via Getty Images.

Paul Solman: It being Thanksgiving, we give today’s post to Governor William Bradford of the Plymouth Colony, built by pious Protestant purists backed by profit-seeking investors.

Bradford tells the story of the tough Massachusetts winter of 1623 and how the colony barely survived, unable to raise enough food to sustain themselves. One reason he gave: the rules of the colony, as laid down by the investors, specified that the colonists should till their land in common, as was the case in the England from which they migrated.

But the colony, perhaps desperate, seems to have changed the rules in order to jack up productivity, allowing individual families to tend plots on their own, an early instance of the benefits of pursuing self-interest as opposed to communalism.


I am on record: successful economic grand strategy entails a balance between cooperation and self-interest. Extremes in one direction or the other are unsustainable. According to Governor Bradford, extreme communalism wasn’t doing the job in Plymouth, Massachusetts ca. 1623.

William Bradford: “Whille no supply was heard of, neither knew they when they might expecte any. So they begane to thinke how they might raise as much torne [corn] as they could, and obtaine a beter crope then they had done, that they might not still thus languish in miserie. At length, after much debate of things, the Govr (with the advise of the cheefest amongest them) gave way that they should set corve [crops from labor] every man for his owne perticuler, and in that regard trust to them selves; in all other things to goe on in the generall way as before. And so assigned to every family a parcell of land, according to the proportion of their number for that end, only for present use (but made no devission for inheritance), and ranged all boys and youth under some familie. This had very good success; for it made all hands very industrious, so as much more torne was planted then other waise would have bene by any means the Govr or any other could use, and saved him a great deall of trouble, and gave farr better contente. The women now wente willingly into the feild, and tooke their litle-ons with them to set torne, which before would aledg weaknes, and inabilitie; whom to have compelled would have bene thought great tiranie and oppression.

“The experience that was had in this commone course and condition, tried sundrie years, and that amongst godly and sober men, may well evince the vanitie of that conceite of Platos and other ancients, applauded by some of later times; -that the taking away of propertie, and bringing in communitie into a comone wealth, would make them happy and florishing; as if they were wiser then God. For this comunitie (so farr as it was) was found to breed much confusion and discontent, and retard much imployment that would have been to their benefite and comforte. For the yong-men that were most able and fitte for labour and servise did repine that they should spend their time and streingth to worke for other mens wives and children, with out any recompence. The strong, or man of parts, had no more in devission of victails and cloaths, then he that was weake and not able to doe a quarter the other could; this was thought injuestice. The aged and graver men to be ranked and equalised in labours, and victails, cloaths, etc., with the meaner and yonger sorte, thought it some indignite and disrespect unto them. And for mens wives to be commanded to doe servise for other men, as dresing their meate, washing their cloaths, etc., they deemd it a kind of slaverie, neither could many husbands well brooke it. Upon the poynte all being to have alike, and all to doe alike, they thought them selves in the like condition, and ove as good as another; and so, if it did not cut of those relations that God hath set amongest men, yet it did at least much diminish and take of the mutuall respects that should be preserved amongst them. And would have bene worse if they had been men of another condition. Let pone objecte this is mens corruption, and nothing to the course it selfe. I answer, seeing all men have this corruption in them, God in his wisdome saw another course fiter for them.”

Paul Solman: A final word. It’s not at all clear that Plato/Socrates were genuinely pushing collectivism. Many scholars, including two I very much respect, Bob Faulkner of Boston College and Mark Kleiman of UCLA, think “The Republic” is one long reductio ad absurdum — a sustained effort to take the idea of a planned community to its logical conclusion. If you’re looking for an apparent champion of pure collectivism, I suggest the evangelist Luke and his account of the first Christian Pentecost in Acts of the Apostles, 4:32 through 5:10.