The demand for nursing isn’t going away. Will more men join their ranks?

Today is David Hernandez’s third time taking the test, known as the HESI. He picks a seat at one of the long rows of computers in the exam room.

But in the room of 60 or more, Hernandez stands out. He’s one of few men.

Of the more than 500 students pursuing registered nursing at Palm Beach State College, a community college in Lake Worth, just 83, Hernandez included, are men.

Hernandez is preparing to enter a field dominated by women. In Florida, 89 percent of registered nurses are women, on a par with levels nationally, according to the Florida Center for Nursing. And while the percentage of men in registered nursing has risen over the decades — a mere 3 percent were nurses in 1970, for instance — the numbers are still surprisingly low for a field that has seen immense growth.

Male-dominated sectors have hemorrhaged jobs in recent years: manufacturing — 70 percent male — lost 5 million jobs over the past two decades. Meanwhile, education and health services, where the workforce is roughly 75 percent female, added 9 million jobs over the same time period. In fact, since 2007, the health care industry alone — led by nursing and home health care — has added jobs at more than three times the rate of the rest of the economy.

Economists have long assumed that displaced workers, such as those left behind by globalization and automation, could adapt and move into growing fields, like nursing. But that largely hasn’t happened, and economists attribute the failure to a number of factors. Pay plays a role, but there’s something else deterring them from these jobs, says economist Betsey Stevenson: stigma.

Hernandez barely took a breath when talking about an open heart surgery he watched two weeks ago: the doctor stopped the patient’s heart to operate while a perfusionist — a nurse specialist — operated the heart-lung machine, pumping oxygenated blood throughout the patient’s body.

The 26-year-old was studying to become an air traffic controller when government money dried up for the program in Oklahoma. 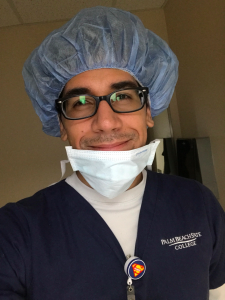 It wasn’t until his mother took a fall and was cared for by a male nurse that Hernandez began to consider nursing as a career. On Palm Beach State College’s campus, where he had returned to complete his Associate of Arts degree, Hernandez began taking note of the students walking around in scrubs. He began a curious habit: He stopped students to ask them about the program, and if they liked it, how long it took.

“I looked online: what’s the starting salary for a nurse? Was there job growth, specifically in Florida? And there was a lot,” Hernandez said. He found that “most students that graduate nursing school go straight into a job.”

Is stigma keeping men out?

You’ve heard it again and again: a man could graduate from high school and get a well-paying union job at the factory down the road that enabled him to buy a house for his family, live a middle-class lifestyle. But not anymore.

As a result, many men have fallen out of the workforce, and few have rejoined.

Today, only 83 percent of men between the ages of 25 and 54 with a high school education or less are employed or looking for work, compared to 97 percent in 1964. And the reason, Stevenson says, may be directly related to how men perceive themselves and the jobs available.

“If you’ve grown up thinking your whole life that you’re going to go into a factory and make stuff, then you’re [not] going to [want] to go into a home and take care of [someone],” she said.

Rose Campbell, a registered nurse in Miami, thinks the problem is rooted in a lack of awareness regarding nursing. People think that “all you’re doing is wiping grandpa’s bottom,” she said. But, Campbell said, it’s so much more than that.

“You get spit on, get [bled] on, I have people’s lives in my hand. And I have to be very cognizant of what they need,” said Campbell, a nurse for 24 years. “Half the nurses don’t eat or use the bathroom, because they’re running around looking after their patients.”

But the perception that nursing is a woman’s field depends on “who you talk to,” said Markenson Andre, who is working part-time as a caregiver at Home Instead in Port St. Lucie, Florida, and is also a licensed practical nurse. Andre, a man, had wanted to become an EMT or paramedic, but a physician at his barber shop told him nursing was the way to go. “If you do nursing, I’ll guarantee you a job,” the physician had said.

The demand for nursing is high and growing. Ten thousand baby boomers reach retirement age every day — in Florida, nearly one in five residents is over age 65 — and as people get older, their health needs increase. There were more than 9,000 registered nurse vacancies in the Sunshine State in 2015, according to the Florida Center for Nursing. But barely 4,000 people in the state became registered nurses in 2016.

“I’ve never heard of someone not getting a job,” Herrington said.

Economist Mark Perry of the American Enterprise Institute said those in health care and education are also less likely to be unemployed over the course of their career.

“It’s much more stable than construction and manufacturing,” Perry said. “[Even in downturns], people still need to go to elementary school and to the hospital.”

Changes in culture and identity slow to shift

Still, while growth in the industry has been swift, changes in culture and identity have been slower to shift.

Campbell, 53, recalled a time when men “wouldn’t admit that they were nurses outside of the hospital,” she said. “It was a taboo thing, you know.”

Of the men that do go into these entry level positions in health care, the majority are black, Latino and immigrant — men who are disadvantaged in the workforce at large, Patricia A. Roos, a sociologist at Rutgers University, found in a forthcoming study. 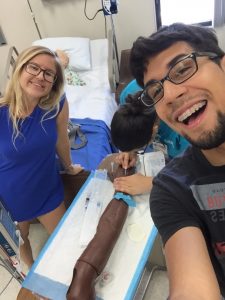 Patients are often surprised to see men at their bedside.

While completing clinical hours in the labor and delivery unit, Hernandez was frequently asked to remain outside while female nursing students were permitted inside to view the delivery. The reason? Female patients said they were uncomfortable with a male student nurse in the room.

“I have felt down at times. The first time it happened to me, I was like, maybe [nursing is] not for me,” he said. “I don’t understand why this patient wouldn’t want me — I’m caring for them!”

Still, many caregivers and nurses say the stigma is fading, albeit slowly.

Home Instead caregivers Fearon Wright, 58, and Jerry Lopez, 64, say being a man can be an advantage — in fact, many male clients’ families will ask for them. Sometimes clients just want a male companion to talks sports or share war stories, Lopez said.

“I think [the] ‘old school’ is still going to have that opinion [that men should not be nurses], but to the whole modern [generation], nursing is looked upon as a field where you can have a job, work, take care of your family,” Rose Campbell said.

Hernandez agrees: “It’s ingrained with the millennials, we feel we can do any field, regardless of what anyone tells us.”

Pay is also a factor.

“Female-dominated jobs are stigmatized because they’re lower paid for every level of skill, effort and responsibility,” Ghilarducci recently told the PBS NewsHour’s Paul Solman. “What’s not manly about women’s jobs [is] that women’s jobs don’t pay a decent wage.”

Research suggests that women’s jobs are valued less, simply because they are done by women.

Pay in the health care industry runs the gamut. The average registered nurse makes $34.70 an hour, and licensed practical nurses and licensed vocational nurses make $21.56 per hour on average. But the average home health aide makes only half of that — $11.35 an hour. The low pay has led many home health aides to join unions, like the 1199 SEIU health care workers union and the Fight for $15 movement.

For blue-collar workers who once made $28 an hour at a union manufacturing job with only a high school education, the entry-level positions in the health care industry can look unappealing.

“These wages are lower than what they had in the past,” Stevenson said. “But they don’t have an option to go back to the past.” 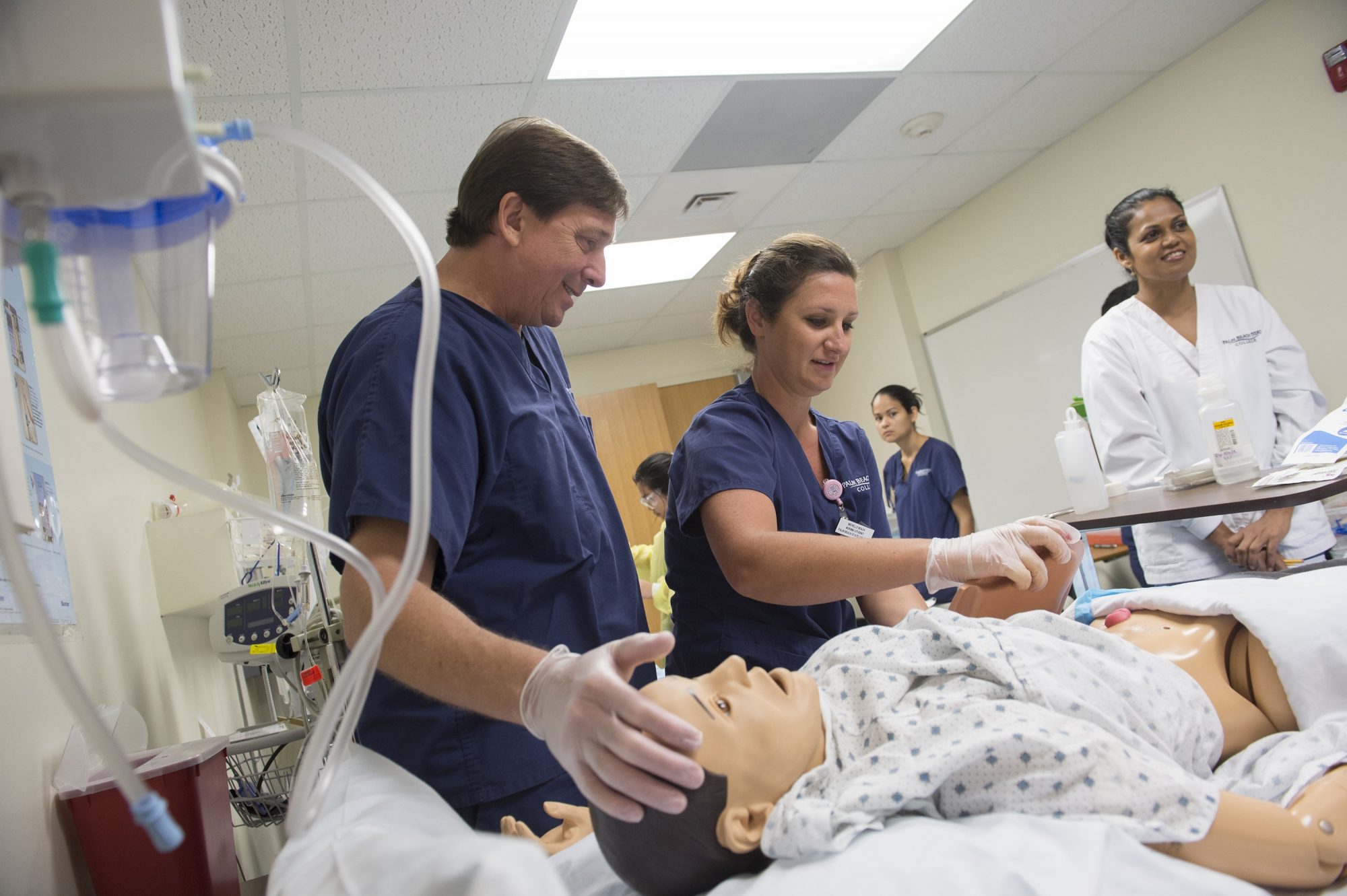 Better pay could encourage more men to enter the health care field, Stevenson said, noting that in Cuba, a number of the jobs we think of as “women’s work” in the U.S. — like hotel maids — were done by men because tourism jobs pay well.

But for some, the argument that pay is keeping men from pursuing a career in the field doesn’t hold water.

Lazaro Gercin, 42, became a nurse after 12 years as a EMT paramedic. His reason for switching? Money.

“It was worthwhile investment,” he said, adding that he spent a total of $14,000 for his degree.

Gercin credits his union, National Nurses United, for helping boost what he earns; the average nurse in Miami, according to Payscale, makes $27.51 an hour.

Since the hospital unionized, pay is based on experience and has been equal between men and women. But before wage negotiations, a woman coming in would make $24 an hour; a male would make $27, said Campbell, who works at the same hospital as Gercin.

Stevenson said while some manufacturing jobs pay better, health care positions “have greater wage trajectories and there’s room for promotion and wage growth, because these are growing fields.”

That ability to pursue different paths within health care and see that wage growth is what attracted Hernandez to the profession.

“I’m a first-generation student, born and raised in Puerto Rico, and so for me … since I’m the first student to ever go to college, I didn’t want to just do any two-year degree, I wanted to make sure that I can go all the way to the top,” he said.

Hernandez has a 3.63 GPA; if he keeps his average above 3.5 and works for a few years in the hospital with the goal of entering surgical ICU, he can apply to the University of Miami’s graduate program for nurse anesthetists. Nurse anesthetists are certified nursing specialists who provide the same anesthesia services as an anesthesiologist. The average salary is $163,000 a year.

“I think it’s a great career,” Gercin said. “You’ve got to be compassionate; it’s not only the money, you’ve got to like it. Because it’s not pretty. If you like pretty, don’t get into nursing.”

Like nursing, elementary school teaching is another female-dominated field that has seen few men join the ranks. Economics correspondent Paul Solman profiles second grade teacher and football coach Harold Johnson, a rarity who others might want to emulate.