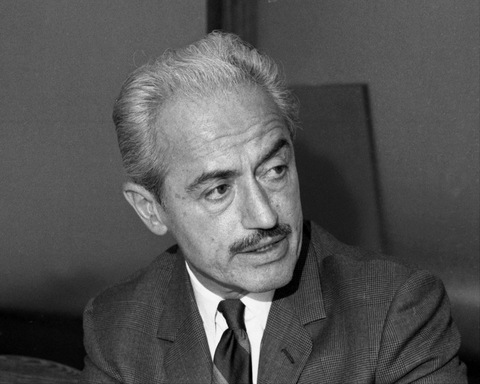 Ten years ago, for a series on CEO pay, I interviewed Marvin Miller, the labor lawyer who introduced free agency into American sports. Miller died Tuesday. He was featured in the second story on “Executive Excess”. We thought we’d share more of the interview here today.

PAUL SOLMAN: A number of other people who we’ve talked with say that CEO compensation is just the same as athletes’ and the negotiation that takes place between an athlete and a team. True? False? Ridiculous?

MARVIN MILLER: I choose ridiculous. [LAUGHS] You have to consider how salaries are set and by whom in each case.

In the case of CEOs, in the first place, whatever they’re paid is not determined by the people who pay it — namely the stockholders;it’s certainly not determined by people who are neutral or partial to the stockholder; they’re partial to the CEO. In the main, boards of directors determine a CEO’s pay. Sometimes it’s sort of a compensation committee appointed by the board, but it’s the board. And the board is composed of individuals who are there by and large by fiat of the CEO! Some of them areso-called “insiders.” That is, they have other duties for that corporation or its affiliates. Others are so-called “outside members.” But all of them are beholden to the CEO for their appointment – for the perks they receive as appointees, and [LAUGHS] to compare that to asituation of an athlete is absurd.

Let’s start with the major league baseball players. [They] have their salaries set by the men who pay those salaries: owners of baseball clubs. And since he’s the one paying it, you can be pretty sure, absent a major error, [the owner is] not overpaying the player. First of all, it’s not in his interest to do so. Andmore important than that, even, is that – I hate to use this word; it’s been over-used recently — there’s a transparency about ball players’ salaries and performance. Every ballplayer’s performance is a matter of record to the most finite detail.

PAUL SOLMAN: In the case of baseball players or hitters, to the third decimal point!

MARVIN MILLER: [LAUGHS] Absolutely. More than that – his everyday performance is rung up on a scoreboard for 40, 50,000 people to see, plus all the newspapers and so on. It’s one of the few places I know where when you make an error–there’s a scoreboard that has a light that goes on and off to catch everybody’s attention: “error.” [LAUGHS] But more than that, you know, his whole performance– his lifetime records so far, his records last year to the nthdegree. If he’s a hitter, it’s his batting average; it’s the number of extra base hits; it’s the number of home runs; the number of runs batted in; the number of times he has failed to advance a runner; the number of times he has failed to drive in a runner who was on second or third with less than 2 outand, and on and on to the nth detail.

PAUL SOLMAN: Because there are no performance statistics.

MARVIN MILLER: That’s right! And, more than that, there are no real statistics as to compensation and perks unless like the recent CEO’s wife who divorced him [Jack Welch of GE] and then portrayed all the perks in the newspaper…

I’m just saying you can’t talk about market value if you don’t know what the market is paying. [LAUGHS]

MARVIN MILLER: It seems plausible. But it’s not! I mean factually, when major league baseball players averaged 19,000 dollars a year –’66, ’67 — and the years around there, I was working for the steel workers union and I was part of a negotiating team that negotiated with the top labor relations executives and vice presidents of United States Steel Corporation and Bethlehem and Republic Steel and Alcoa and Kennecott and so on. And [their compensation was] beyond belief for us who worked for the union at $12,000 a year. So that I know that executive compensation was in the stratosphere long before the term free agent even became known to people.

PAUL SOLMAN: I was talking about the explosion of CEO pay in the last 10 or 20 years — that’s what’s attributed to free agency in sports and that’s also what’s attracted all the attention. Everybody knows that CEOs were always paid a lot of money but it’s now 500 times that of the average or lowest paid worker compared to 140 times just 10 years ago, compared to something like 40 times before that.

MARVIN MILLER: I haven’t made a study of this, and therefore I, I don’t speak authoritatively about it at all. But if I had to guess, I would say the factor of the Stock Market and its rise in the years you’re talking about would be a lot more closely related to the reasons for the explosion of compensation in payrolls. Their stockholders were benefiting, and therefore even if the stockholders were to get wind of how much [LAUGHS] was being paid to a CEO, you were far less likely to get objections than in a period of declining stock prices.

PAUL SOLMAN: But athletes and their high pay is a good cover, a convenient excuse?

MARVIN MILLER: Absolutely. It’s really quite simple. Before the union, players were among the most exploited of employees that you would ever find. Tbey were paid [LAUGHS] – peanuts. They had no bargaining power. They were property under the reserve rules. A player, the minute he signed his first professional contract in the minor leagues, was a piece of property of the organization to which he signed a contract, and for the rest of his natural life, he belonged to that organization, unless they decided to trade him for another player or sell him for cash. He was property in every sense of the word, and property has no bargaining power. When property [LAUGHS] sits down to – I won’t even call it negotiate a contract– or to be told what his contract will have for next year and his only alternative is to find a new way to make a living – if you are owned by a club and you don’t choose to play for whatever they offer you, you can’t play not just for that club. You can’t play in the major leagues for any club. You can’t play for the minor leagues for any club. You can’t play in the United States or Canada or Mexico or Puerto Rico or the Dominican Republic or Venezuela or Japan! You are banished. This is a monopoly industry. And under those circumstances, when major league players averaged $19,000 a year and the minimum salary was $6,000 [in the ’60s], this was the reason for it. And the union changed all that. It got rid of the reserve clause…

It wasn’t until you could negotiate a collective bargaining agreement and in that agreement negotiate impartial arbitration at the end of the grievance procedure that you could really move against this.

PAUL SOLMAN: And that was a crucial moment in changing the balance of power in sports in this country.

MARVIN MILLER: Absolutely. It’s not often that you have such clear cut cause and effect. When you look at why [LAUGHS] are the salaries the way they are in major league baseball, you have to say because the union changed the whole power relationship.

I object to vague criticism that salaries are too high because they’re higher than teachers and teachers are more important. Well, that’s fine, except if the ball players played for nothing, the teachers wouldn’t get one cent [more]. We don’t have a society under which a compensation of an employee is determined by its social value, its social good. I wish we did, but we don’t.