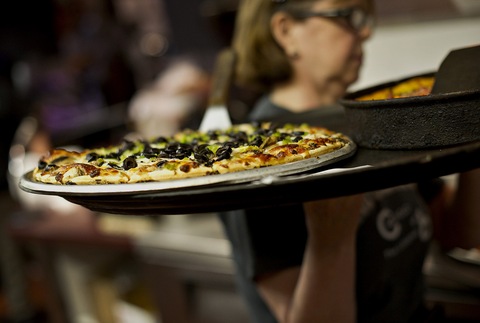 Service sector employers added the most jobs in ADP’s monthly payroll report released Wednesday. But that report can’t take the place of the Bureau of Labor Statistics data we’d get Friday if the government weren’t shut down. Photo courtesy of Daniel Acker/Bloomberg via Getty Images.

With the federal government out of commission, the Bureau of Labor Statistics will most likely not be releasing its monthly jobs data this Friday. Those numbers play an important role in determining Federal Reserve policy, and in their absence all eyes are on their monthly precursor, the ADP National Employment Report, whose release Wednesday showed private employers adding 166,000 jobs in September, more than 10 percent lower than expected.

Also negative was the fact that ADP revised August’s private employer payrolls down from 176,000 to 159,000. Last month’s BLS report had showed 169,000 new jobs added in August.

ADP (Automatic Data Processing) is a payroll processing company, and its monthly report is jointly developed with Moody’s Analytics. Reflecting on the numbers, Moody’s well-known chief economist Mark Zandi said, “Fiscal austerity has begun to take a toll on job creation.” But, he added, “job creation continues to be consistent with a slowly declining unemployment rate.”

Although ADP numbers are often used as a predictor of BLS numbers released later in the month, they’re not a substitute, University of Michigan economist Justin Wolfers reminded followers on Twitter.

If you believe that the ADP report is a substitute for the payrolls report, you deserve to be deeply misled.

What’s the difference? ADP makes forecasts based on already available data, whereas the BLS reports new data, Wolfers told us.

ADP enters their estimates into “an econometric black box” to crunch their forecast, he says. But those forecasts are very heavily influenced by public data already available — the previous month’s jobs numbers, for example. Forecasters also make subjective adjustments when they think certain numbers are too large to be realistic.

The problem for outside analysts, as Wolfers sees it, is that ADP never breaks down the extent to which they’re using new data and how much of what they report is simple regurgitation of last month’s non-farm payroll numbers. “The fact that they’re not public about it,” he said, “leads me to have suspicions that lots of it is backward-looking and regurgitation.”

The BLS will most likely release their already collected September jobs numbers the Friday after whenever the government reopens. Since the economy has been so consistent, adding between 160,000 and 200,000 jobs a month, not having one month of data released this week won’t leave such a hole, Wolfers thinks, especially since the next Federal Open Markets Committee Meeting won’t be held until the end of October.

The bigger concern is for data collection. If the government does not re-open before the week of Oct. 12th, when the BLS runs their household surveys asking actual people about their employment status, we will have an even murkier picture of the effects of a shuttered government and a possible debt default. If that point comes, we won’t be able to rely on ADP’s numbers to stand in the BLS survey’s stead since ADP only surveys businesses.