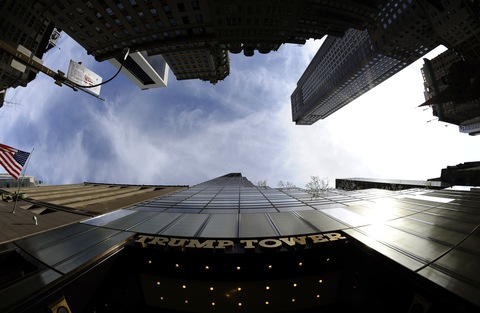 A view of the Trump Tower on 5th Avenue in New York. Photo by Timothy A. Clary/AFP/Getty Images.

Paul Solman frequently answers questions from the NewsHour audience on business and economic news on his Making Sen$e page. Friday’s query comes from a reader at Next Avenue. The NewsHour has partnered with Next Avenue, a new PBS website that offers articles, blogs and other critical information for adults over 50.

Can a 66 year old retired man with a retirement income (pension and Social Security) of $52,000 get a 30 year fixed rate mortgage? If yes, does it make financial sense to do this?

Paul Solman: Hi, Jim. Please forgive the rant that went up first thing this morning on Making Sen$e and the Rundown, and is reprinted below. I simply didn’t understand the thrust of your question.

You mean, I think: if someone is already 66, does it make sense to take out a loan that will only be paid off when s/he’s 96? And will a lender say: “Forget it. He won’t live long enough.”

Don’t worry about the lender. A standard rule of thumb applies, regardless of age: So long as your mortgage payments are no more than 45 percent of your gross income, you should be able to get the mortgage. And since Social Security and pension income – the latter up to the federal guarantee limit of $4653.41 a month for 2012 — are as close as you can get to a sure thing these days, the lender should be more reassured than with regular income, which can end abruptly at any moment.

(By the way, why didn’t you call a mortgage broker?)

As for the “Should you?” part of the question, the answer is: it depends. It depends on your alternatives, on your expectations for inflation, and on how long you expect to keep the mortgage.

As it happens, I may be in a similar situation. My wife and I had a 7/1 mortgage that fixed a rate for seven years and then went to a variable rate, which is where we are now. So we’ve been considering a switch to a 30-year fixed. Frankly, the issue of age had never occurred to me, but I guess that could be because of my devout immaturity.

When I consider the mortgage alternatives, prime among them is how long we plan to stay in our current home. And that’s why I have not applied for a 30-year fixed refinancing for the roughly $300,000 remaining on our mortgage.

Say we’ll be here another five years, just for the sake of running some numbers. And for the same reason, let’s say the upfront fee, aka “points,” would be $1500.

The first problem is that mortgage repayments are front-loaded. That means you’re disproportionately paying off the interest debt in the early years. Those with fixed rate mortgages have surely noticed this: the principal barely budges in the first few years. So why replace a mortgage like ours, where something like half the payments are now going to pay down the principal, with a mortgage that reverts to payments devoted almost entirely to interest?

That front-loading has been enough to discourage me from considering a switch. But an additional discouragement would be the points. Spread out over 30 years, $1500 up front is only $50 a year. Spread out over five years, it’s $300 a year. That can make a big difference in the APR – the Annual Percentage Rate. And since the whole point of switching to a 30-year fixed is to lower your interest rate, the APR is a key metric.

A penultimate consideration. Taking out a 30-year fixed-rate loan when the interest rate is as historically low as it is right now makes great sense as a hedge against inflation. If inflation spurts, you benefit. If it drops even further, you can refinance yet again.

But the hedge only lasts as long as you keep the mortgage. If you plan to leave the property in a few years and thus leave the mortgage as well, you’re betting that inflation will rise substantially within that time frame.

Finally, there’s the issue of mortality. Since one of my most cherished books is “The Denial of Death,” I may be the wrong advisor here. But should Ray Kurzweil be wrong in predicting that, we’ll have conquered death within 15 years, as he did here on Making Sen$e, and http://www.pbs.org/newshour/rundown/2012/07/ray-kurweils-immortality-cocktail-student-loan-skeptic.html) then you and I both have demise to consider. To me, mortality has no influence on the mortgage decision. I’m trying to maximize my assets as it is. That can only benefit my estate, should there be one, regardless of when the bucket is kicked; the farm, bought. But I suppose that if my wife and I were both to begin dining on dust in the near future, the thoughts about mortgage duration should apply (see above). In this case, I think I’ll go with Kurzweil.

One last comment, Jim, it was only after re-reading your question and my answer that I got your drift (I think). And even so, it provides none of the key information one would need to provide a reasonable answer. So I’m preserving my original response, below. And if I’m now wrong and your question actually meant what I first thought it did, then I stand by what I originally wrote. In any case, it has a few funny lines that I’d hate to deny posterity.

I hope you don’t mind my using you as a pretext for a rant, but even if you do, here goes. There is now an Internet, which contains some substantial fraction of all the knowledge humankind has spent millennia taking the trouble to amass. It behooves you and those your age – correct that, it obliges you — to take some infinitesimal smidgin of that trouble to learn the basics of personal finance. Its your future that’s at stake.

Okay, okay. I can hear you muttering, or perhaps even sputtering: “That’s what this guy Solman and Next Avenue are for.” And yes, we’re here to serve. But for goodness sake, prepare sufficiently before posing a question so that your query doesn’t drive those who would help you to deep despair. You’re 66 years old!

Think about your question for a moment. “Can I get a 30 year fixed rate mortgage?” For how much money? A million dollars? A buck seventy-five? In other words, the first question is, as it is with any loan: How much do you wish to borrow?

A second rather obvious question: What is the loan for? Are you borrowing to buy or refinance the 3-floor apartment atop Manhattan’s Trump Tower? Or for a tree house? As with any loan, the lender will want to know how much collateral is backing it up, don’t you suppose? In other words, how much the property is worth?

A third question, just as about as obvious as the first two: Equity, aka “ownership.” That is to say: How much of your own money do you currently have in the property? Or, if you’re buying it for the first time, how much of your own money are you putting up? I’ve seen a market estimate of $50 million on the 30,000 sq. foot, 3-floor Trump showpiece, with its “spiral golden staircase” and 16-foot ceilings (according to the Glam Valley website; I myself have never been invited).

If you apply to a lender for a million dollars to buy or refinance the Trump apartment (so that you can change its name to the Raymond Roost, say), and if you put up $49 million, and if you can get a legit appraisal of $50 million, you might be taken seriously. That’s because, were you to fall behind on your payments, the mortgage owner can foreclose, resell the property, and recoup the million-dollar loan. If, however, there’s already a $49-million first mortgage on the place, the lender is at risk. I ask you: would you lend me a million dollars in the those circumstances? Even though I am still working and earn more than $52,000 a year?

My first joint post on Next Avenue and Making Sen$e emphasized the importance of mastering the basics. http://www.nextavenue.org/article/2012-07/biggest-retirement-mistake-boomers-make-and-how-avoid-it
We’re now making a concerted effort to do this on both sites with regard to retirement and Social Security benefits under the guidance of Boston University economist Larry Kotlikoff LINKS

But I had thought, when it comes to decisions about housing, that most PBS viewers would at least have understood fundamentals like those outlined above.

Rant over. What were the questions again? Oh yes: “Can a 66 year retired man with a retirement income (pension and social security) of $52,000.00 get a 30 year fixed rate mortgage? If yes, does it make financial sense to do this?”

To the first question, the answer is: It depends on all of the above.

To the second question, the answer is made up of two more questions: 1) What’s the interest rate? 2) What is the alternative course of action? No one can answer you until they know the answers to these.

Look, folks, I sympathize with the complexity of financial decision-making. That’s why there IS a Next Avenue, a Making Sen$e. But you all are going to be blindsided if you don’t school yourself in the fundamentals of personal finance. Or maybe you’ll just be robbed blind, and never even know it.

As usual, look for a second post early this afternoon. But please don’t blame us if events or technology make that impossible. Meanwhile, let it be known that this entry is cross-posted on the Making Sen$e page, where correspondent Paul Solman answers your economic and business questions