Equal pay for equal play. What the sport of tennis got right

King said she decided at age 12 that she wanted to fight for equal rights for girls and women. And she used the tennis court as her platform.

“Everyone thinks women should be thrilled when we get crumbs, and I want women to have the cake, the icing and the cherry on top too.”

“Everyone thinks women should be thrilled when we get crumbs, and I want women to have the cake, the icing and the cherry on top too,” said King at the Miami Open tennis tournament in March. The athlete has won 12 grand slams.

After King threatened to boycott the U.S. Open in 1973 over pay disparity, it became the first major tournament to award equal prize money to its male and female champions. Wimbledon, the oldest tennis tournament in the sport’s history, was the last Grand Slam event to follow suit in 2007, after Venus Williams led the charge for equal pay.

Today, thanks to the advocacy of King and other female players’, tennis is one of the few global sports that pays its men and women the same amount in major tournaments.

But scrutiny over pay in tennis was reignited, again, last month.

Novak Djokovic, the highest-ranked men’s tennis player, then asked if women deserved equal pay, adding that the “men’s tennis world … should fight for more.” The male and female Indian Wells winners, Djokovic and Victoria Azarenka, both received $1.03 million for their tournament victories. Djokovic has since walked back the comment.

Tennis greats Billie Jean King and Chris Evert held a news conference at the Miami Open to discuss such resistance from male players over equal pay. Video by PBS NewsHour

David Berri, co-author of “Stumbling on Win” and an economics professor at Southern Utah University, said the men who are making controversial statements over equal pay have no idea the race is biased in their favor when men’s sports get to play on bigger networks with better promotion.

All four Grand Slam events may have propelled tennis ahead of other sports in equal pay, but the sport still grapples with other factors that prove more beneficial to male athletes. 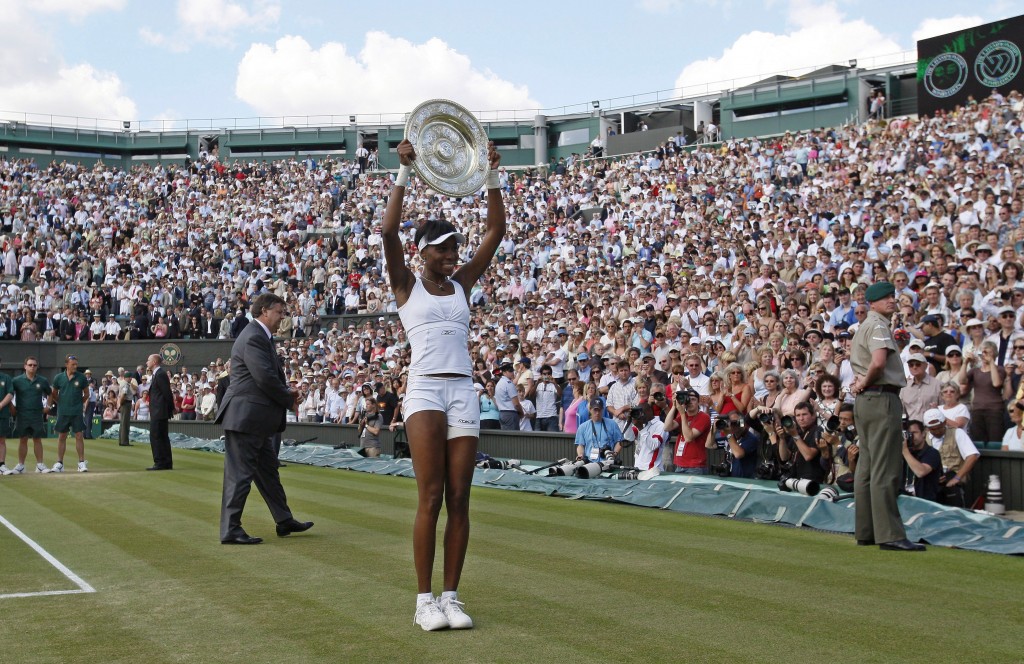 Venus Williams of the U.S. holds the trophy after winning the final against France’s Marion Bartoli at the Wimbledon tennis championships in 2007. That same year, Wimbledon became the last Grand Slam event to offer equal pay after Venus Williams and other female players pressured organizers that ran the tournament. Photo by Toby Melville/Reuters

But gender equality in sports goes beyond the money, Berri said.

Leadership among the four major tournaments is mostly white and male. Katrina Adams, CEO of the U.S. Open, is the only woman who bucks the trend, Berri said.

Also, as FiveThirtyEight has pointed out, there can be an imbalance over who gets to play on the main courts of major tournaments, where journalists, fans and cameras train their focus. At the Wimbledon last year, organizers allocated only 38 percent of scheduled spots for women’s matches, giving them less opportunity to foster and build a fan base.

Despite these inequalities, “If you look at other sports, such as soccer or basketball, it is the case that there’s more wage equality in tennis than other sports,” said Berri.

Just last month, the U.S. women’s national soccer team filed a complaint with the Equal Employment Opportunity Commission for being paid four times less than their male counterparts in the 2015 World Cup. 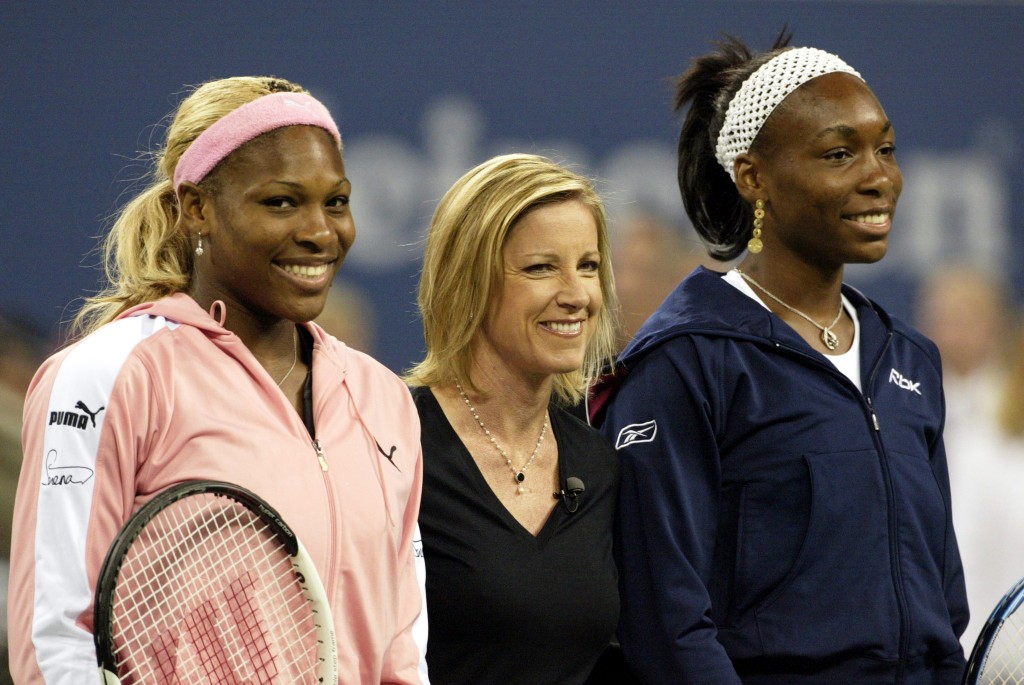 Venus Williams (R) and sister Serena Williams (L) pose with Chris Evert before the start of the women’s final at the U.S. Open in Flushing, New York in 2002. Evert, who has 18 Grand Slam wins to her name, said at the Miami Open in March that it “would just be nice for the ATP and WTA to get in the same room and have a little conversation.” Photo by Kevin Lamarque/Reuters

Berri said that difference of promotion can also seen with the expansive production value afforded to the NCAA men’s basketball tournament, an example of unequal coverage. The men’s tournament had multiple camera angles covering the event. Meanwhile, during the women’s tournament, broadcasters were remote — not present in the arena, Berri said.

Shortly after Moore and Djokovic made their comments about women’s tennis, a news conference with King and fellow tennis great Chris Evert was organized at the Miami Open to discuss such resistance from male players over equal pay.

After tweeting she was “disappointed” in Moore’s comments, King said at the Miami Open that she wanted to move past the controversy because “no one’s perfect.”

In her book, “Pressure is a Privilege,” King talked similarly about her opponent in 1973’s winner-take-all “Battle of the Sexes” match between her, then 29, and 55-year-old former champion Bobby Riggs. 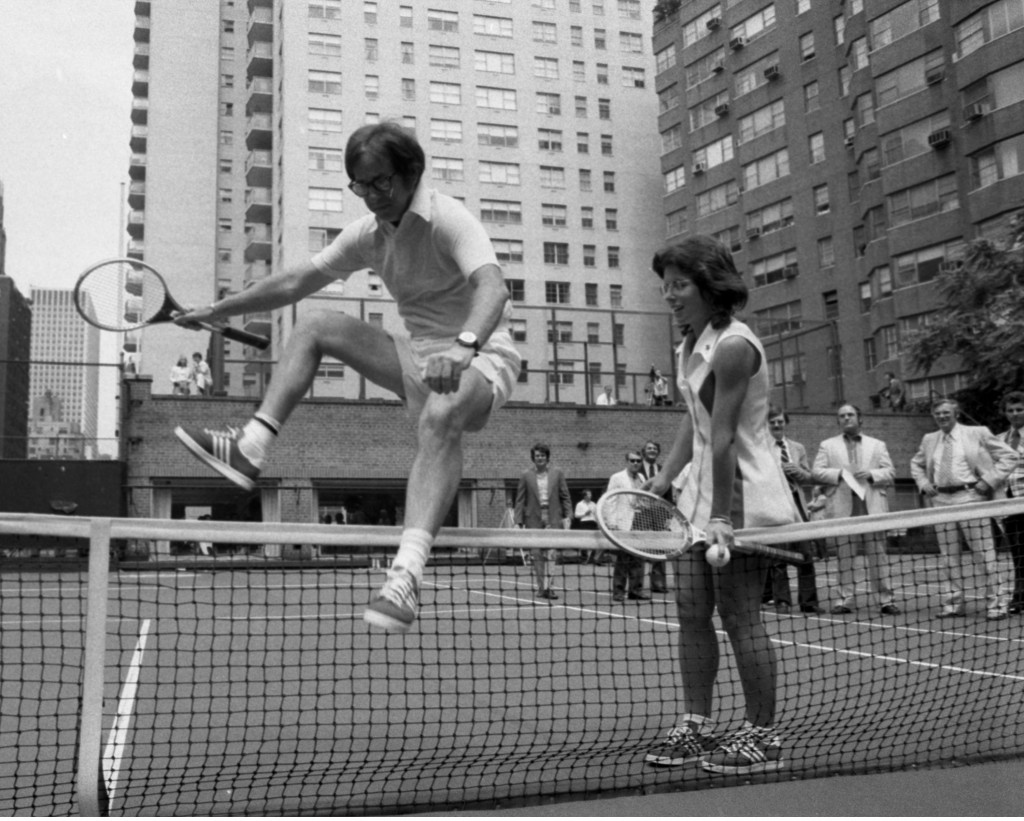 Photo of Billie Jean King, then 29, and 55-year-old Bobby Riggs, as he hops over net at a tennis court in New York. Photo by Jim Garrett/NY Daily News via Getty Images

With second-wave feminism as its backdrop, King said media played the gender angle to the hilt. The telecast began with the “glib tune” of “Anything You Can Do, I Can Do Better” and an ABC announcer spent more time ruminating about her looks instead of her accomplishments, King said.

Riggs arrived in a rickshaw pulled by his “bosom buddies,” while, for her part, King agreed to being carried out by four, muscular track and field men like Cleopatra. In the ramp-up to the event, Riggs had said a series of offensive comments, prompting King to present him with his own “chauvinist pig,” a live piglet adorned with a pink bow.

In front of 30,000 people in Houston’s Astrodome and an estimated 48 million Americans that tuned into the match on their televisions, King would beat Riggs in a 6-4, 6-3 and 6-3 victory. 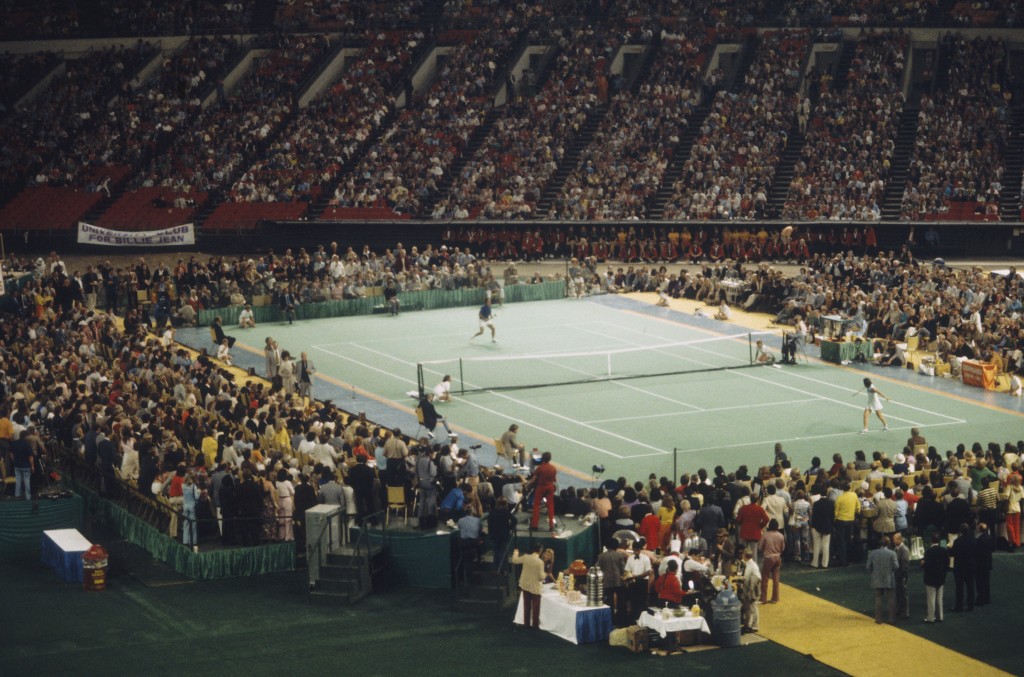 Billie Jean King faces off Bobby Riggs in front of 30,000 spectators at the Houston Astrodome in Texas on September 20, 1973. King defeated Riggs in three straight sets 6-4, 6-3, and 6-3, winning the
“Battle of the Sexes” match. Photo by Focus on Sport/Getty Images

Despite Riggs’ rabble-rousing, one statement from the male player stood out from the rest: “I really underestimated you,” King remembered him saying after he lost the match.

“I think the press was a bit surprised to hear me say that I was not playing the game to prove that women could beat men,” King said in “Privilege.” “I was playing to prove that men and women had the same entertainment value, which is why we should be paid equally.”

Back at the Miami Open, King said although female tennis players made $14 dollars a day back then, it seemed that women had fewer and fewer tournaments to play. She and her colleagues helped found the WTA and started a professional women’s tour, King said. Their goal was that “any girl in the world, if she’s good enough, would have a place to play, be recognized for her accomplishments — not just her looks — and make a living.”

Decades after “Battle of the Sexes” and in light of the pay disparity changes that have been made to the sport, King said “tennis players are the lucky ones.”

Left: Tennis champion Billie Jean King is pictured on Centre Court at the 1969 Wimbledon. The sports icon challenged the gender disparity in the sport amid women's struggle for equality in the 1970s. Photo by Popperfoto/Getty Images