The unemployment numbers for February are in and though economist Peter Morici says ” Don’t Break Out the Champagne Just Yet,” the data are encouraging. 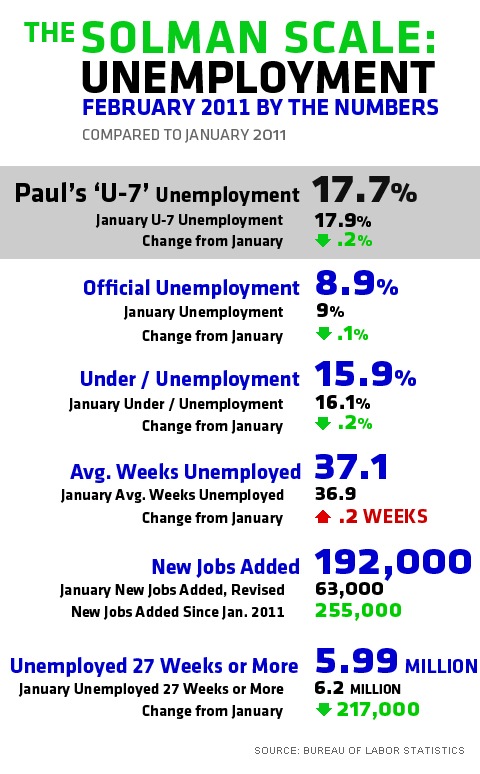 The headline is “unemployment drops to 8.9 percent, the lowest in several years.” That’s from the Household Survey and includes everyone who looked for work in the past four weeks but didn’t work even one hour in the past week. By post-war standards, that’s stunningly high, and the war I mean is not Iraq or the Gulf War or Vietnam or Korea, but World War II, which ended a good 66 years ago.

Moreover, as we’ve chronicled in considerable detail, starting in 2003, today’s number ought to be lower than the previous high point (10.8 percent official unemployment in 1982) because millions more Americans who presumably would be counted as unemployed are in prison, on disability or not counted at all, since they haven’t looked for work in a year.

The government does report a far more inclusive statistic for under- and unemployment, “U-6,” which counts people who haven’t looked for work in the past four weeks but have in the past year — officially dubbed “discouraged” workers — plus part-timers looking for full-time work. That number finally dipped below 16 percent in February, but it’s still 15.9 percent.

Our own statistic — U-7 — is even more inclusive, adding back in all those Americans dropped from the “labor force” entirely because they haven’t looked for work in a year, though they say they want a job. The “super-discouraged,” if you will. U-7 as of February: 17.7 percent, down a full percentage point from 18.7 percent when we debuted the number two months ago.