Ghosn wore a surgical mask, glasses, a hat and a construction worker’s outfit. There was no immediate official confirmation of his release, but his identity was apparent, especially after he was seen on TV smiling after he removed his mask and hat.

There was a scramble by media to follow Ghosn after he boarded a small Suzuki van, topped with a ladder, and traveled from the Tokyo Detention Center toward downtown. Ten motorcycles trailed the van in formation as it passed largely unnoticed through city streets.

Nippon Television Network showed brief footage of Ghosn after he got out of the van in an undisclosed part of the city. 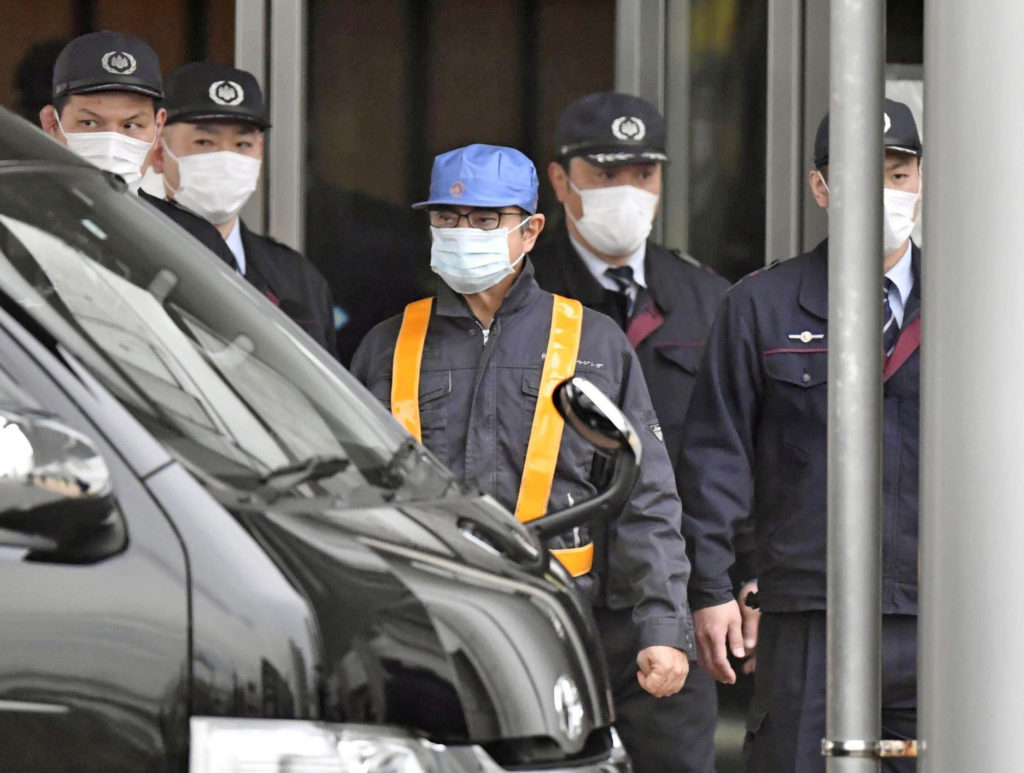 Ghosn, the former head of the Renault-Nissan-Mitsubishi Motors alliance was arrested on Nov. 19. He is charged with falsifying financial reports and with breach of trust.

The Tokyo District Court confirmed the 1 billion yen ($8.9 million) bail was posted earlier in the day, after a judge rejected an appeal from prosecutors requesting his continued detention. That cleared the way for Ghosn to leave the facility after spending nearly four months since his arrest.

Ghosn’s wife Carole Ghosn and one of his daughters were seen leaving the detention center earlier in the day.

Before his release, Ghosn, who turns 65 on Saturday, issued a statement reasserting his innocence.

“I am innocent and totally committed to vigorously defending myself in a fair trial against these meritless and unsubstantiated accusations,” he said.

A date for his trial has not yet been set.

Suspects in Japan often are detained for months, especially those who insist on their innocence, like Ghosn. Some legal experts, including Junichiro Hironaka, one of his lawyers, have criticized the system as “hostage justice,” saying the long detentions tend to encourage false confessions.

French Finance Minister Bruno Le Maire said a presumption of innocence for Ghosn was crucial, while noting the importance to France of the alliance between Nissan and French automaker Renault SA.

Hironaka said his legal team had offered new conditions for his release, such as installing a surveillance camera at his doorway and promising not to use the internet. He is allowed to make voice calls, but not to travel abroad.

Prosecutors contend that suspects may tamper with evidence and shouldn’t be released. Two of Ghosn’s earlier requests to be released on bail were rejected.

Some critics of Japan’s legal system hope that Ghosn’s release, so many weeks before preparations for his trial are ready, may set a precedent and help bring about change.

Ghosn says he did not falsify financial reports because the compensation he is alleged to have under-reported was never paid or decided upon. The breach of trust allegations center on a temporary transfer of Ghosn’s investment losses to Nissan’s books that he says caused no losses to the automaker. The charge also points to payments to a Saudi businessman that he says were for legitimate services.

Nissan declined comment on the criminal case against Ghosn but said an internal investigation had found unethical conduct. Nissan has dismissed Ghosn as chairman, although he remains on the board pending a decision at a shareholders’ meeting.

Ghosn’s family has said that he has lost weight while in detention, and he looked thinner in his court appearance. Hironaka has said he is in good spirits. Ghosn thanked his family and friends, who, he said, “stood by me throughout this terrible ordeal.”

Left: Former Nissan Motor Chairman Carlos Ghosn sits inside the car as he leaves his lawyer's office after being released on bail from Tokyo Detention House in Japan on March 6, 2019. Photo by Issei Kato/Reuters