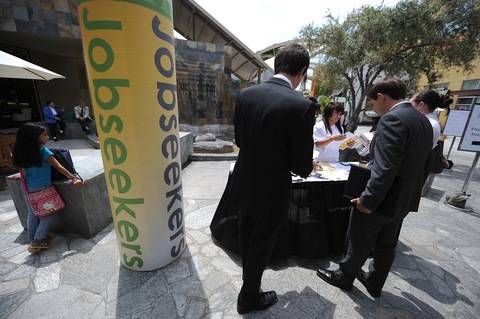 Employers added 431,000 workers to their payrolls in May, the Labor Department said Friday, but the job growth was fueled almost entirely by hiring for the federal government’s 2010 Census. Meantime, the nation’s unemployment rate dipped to 9.7 percent from 9.9 percent after thousands left the labor force.

Temporary positions for the Census count accounted for 411,000 of the jobs created. Friday’s figures fell short of the 515,000 new jobs forecast by economists surveyed by Dow Jones Newswires.

We’ll have more on the new jobs figures later Friday.

BP reported progress late Thursday in the effort to stem the oil spill in the Gulf of Mexico after installing a cap on the blown-out well that company officials hope will allow them to funnel at least some of the leak to the surface.

Despite the breakthrough, Coast Guard Adm. Thad Allen warned that “it will be some time before we can confirm that this method will work and to what extent it will mitigate the release of oil into the environment.”

With oil still pouring into the Gulf, President Barack Obama postponed a trip to Australia, Indonesia and Guam to focus on the crisis. Later Friday, he will return to the Gulf Coast to gauge the federal response to the spill. It will be his third trip there since the spill began.

Speaking on CNN’s Larry King Live on Thursday, President Obama said he is “furious” about the spill. Yet in a nod to recent criticism about his emotional response to the accident, he added:

“I would love to just spend a lot of my time venting and yelling at people, but that’s not the job I was hired to do…My job is to solve this problem and ultimately this isn’t about me and how angry I am.”

Writing in Politico, Keith Koffler says the president’s response is about more than emotion:

“Obama’s failure to convey any hint of genuine emotion, to rouse the American people to turn their hearts toward the Gulf and to assure them that their world … is not falling apart, is a profound failure of leadership.”

Yet the criticism has the Atlantic’s Clive Crook more than a little puzzled:

“Apparently it is a great idea to elect a president who is calm in a crisis, except when there’s a crisis. Then what you need is somebody to lead the nation in panic.”

The Economist’s Democracy in America blog:

“Something odd is happening here. There is the reality of the spill … Then, like an episode of ‘Lost,’ there is the side-story: Obama not showing enough rage; Obama not visiting the coast in a timely fashion; Obama, our overly aloof president. As in the TV show, it is difficult to connect the two.”

An aid ship bound for the Gaza Strip is expected to reach Israel’s blockade of the Palestinian territory on Friday, just four days after an Israeli raid on a humanitarian flotilla bound for Gaza left nine activists dead. Israeli Prime Minister Benjamin Netanyahu told cabinet ministers on Thursday that the aid ship would not be permitted to reach Gaza. The Associated Press reports:

“According to a participant in the meeting, he said Israel made several offers to direct the ship to an Israeli port, where the aid supplies would be unloaded, inspected and transferred to Gaza by land, but the offers were rejected.”

Hatoyama was elected in September, but saw his approval ratings plummet after failing to follow through on a campaign pledge to close an American military base in Okinawa.