But there’s another take on how Europe got rich: milk consumption. Justin Cook is an assistant professor of economics at the University of California-Merced. In his paper, “The role of lactase persistence in pre-colonial development,” Cook explains that the transition to agriculture produced genetic adaptations, such as lactose tolerance, which led to measurable improvements in economic and health outcomes.

We asked Cook to lay out his case.

Could milk consumption have contributed to Europe’s colonization of most of the world during the 16th century?

The answer “yes” is more likely than you may think.

From my research, it appears that the transition to agriculture, commonly referred to as the Neolithic Revolution, which first occurred roughly 10,000 years ago, produced genetic adaptations that were and continue to be favorable to the new agricultural environment and led to measurable improvements in economic and health outcomes. These genetic adaptations differ across ethnic populations and are ultimately the result of differences in historic environments. Lactose tolerance, which enables milk consumption, is a prime example.

By examining the historic effects of milk consumption, measured by a population’s ability to digest lactose, we can understand the Neolithic Revolution’s impact on economic development.

The ability to digest lactose, a sugar found within milk, is the textbook example of a recent genetic adaptation to different agricultural practices. Prior to the domestication of cattle (and other milk producing domesticated animals, such as goats), human populations produced the enzyme associated with the digestion of lactose only in periods prior to weaning or only during early childhood when mother’s milk served as an important form of sustenance.

What do monkeys and humans have in common? An innate sense of economic justice

Many individuals today, however, produce this enzyme throughout their lifetime and are able to consume milk regularly throughout adulthood. These individuals are said to be lactase persistent, which is more commonly known as lactose tolerant.

Lactase persistence differs widely across the world with individuals ancestral to Northern Europe being almost exclusively lactase persistent and the opposite being the case for people ancestral to East Asia. This is shown in Figure 1, which plots historical lactose tolerance frequencies for the Old World (Europe, Asia and Africa). 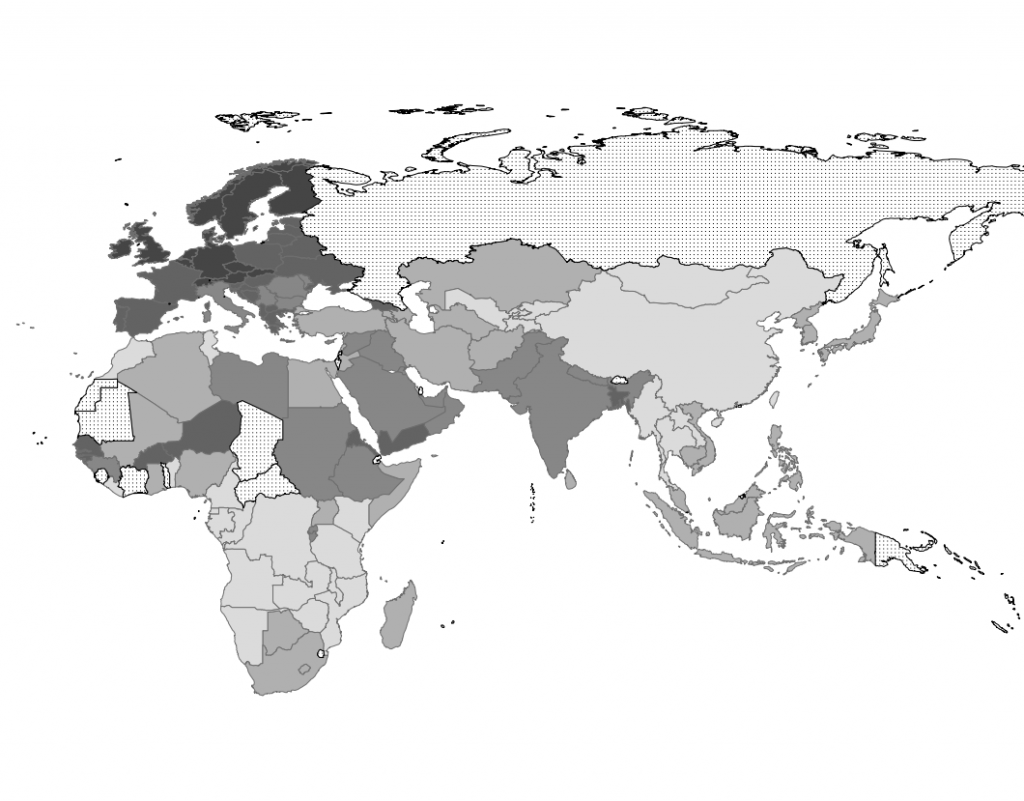 Figure 1. Country-level lactase persistence frequencies across the Old World. Darker areas represent more lactase persistent populations. The Americas and Oceania are absent from Figure 1 as populations from these regions never developed dairying cultures and the resulting ability to digest lactose.

This difference in lactose tolerance across regions is due to differences in the presence of a singular genetic mutation. Individuals with this mutation produce lactase throughout their lives, while those without this mutation do not.

Milk’s role in influencing economic development is threefold. First, milk allowed farmers to obtain a greater quantity of calories from fixed resources — the stock of domesticated animals and the land needed to sustain these animals. In a sense, dairying represents a technological innovation, in which available resources — that is, land and domestic animals — were used in a novel way to increase output.

Second, the composition of milk, which includes fats, proteins and other micronutrients not easily attainable in staple crops improved the average quality of a farmer’s diet. This nutritional improvement likely lessened the impacts of disease and led to more productive farmers.

What explains the glory that was Greece? Actually, sound economic policy

Finally, the consumption of milk increased a woman’s fertility. The infertility period after giving birth is associated with lactation. Having an easily available substitute for mother’s milk potentially reduced the lactation period and the corresponding infertility period, implying that women within lactase persistent populations had the potential for more children over their lifetimes.

These advantages resulted in greater populations for milk-consuming societies, which in the preindustrial economy of the past equated to greater economic development. (China, with its great population, remains a major outlier in my research.) A statistically strong and robust relationship is found between the fraction of a country’s population that is lactase persistent, or able to consume milk, and economic development in 1500 C.E., a period representative of the precolonization era. And given the high frequency of lactose tolerance associated with European countries, milk consumption may have contributed to Europe’s colonization of most of the world starting in the late 15th century.

Another major concern is that lactose tolerance is simply accounting for the beneficial effects of domesticated animals and not the benefits of dairying. This would imply that my proposed hypothesis is just happenstance. Yet, after accounting for a number of controls intended to capture the overall numbers of domesticated animals, the previously found association between milk consumption and historic economic development remains.

So what’s the verdict? Did milk consumption lead to Europe’s colonization of most of the world?

Lactase persistence’s robust relationship with precolonial population density suggests that milk consumption shaped economic development during a crucial time. And while it’s not likely milk consumption directly led to the colonization, the evidence suggests that it helped the overall economic development of Europe during the 1500s, which may have indirectly provided Europe with the wealth for colonization.

Justin Cook is an assistant professor of economics at the University of California-Merced. His research focuses on the role of genetic differences in explaining economic outcomes. Cook's most recent paper, "The Natural Selection of Infectious Disease Resistance and Its Effect on Contemporary Health," was published in the Review of Economics and Statistics.