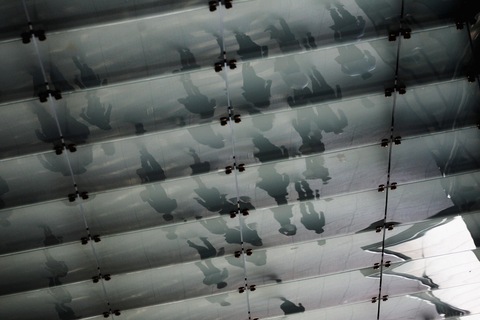 People are reflected in glass as they walk past Goldman Sachs headquarters in New York City. Photo by Mario Tama via Getty Images.

In last week’s New York Times, a Goldman Sachs “executive director” named Greg Smith wrote what just about everyone on earth should – and probably did – already know: Wall Street puts its own interests ahead of its clients’. Far ahead. Smith claimed that Goldman’s culture has deteriorated dramatically since his arrival a dozen years ago.

In the days since, snipers have taken shots at Smith’s competence: not yet a “managing director” — i.e., partner — after fully 12 years with the firm?

At his tardy conversion: “Did Smith think,” asked Lauren Collins on the New Yorker blog, “when he signed on with the bank, that he was joining a charitable organization?”

At his self-esteem: Smith boasts in his op-ed of getting a full scholarship to go from South Africa to Stanford University, being selected as a Rhodes Scholar national finalist, winning a bronze medal for table tennis at the Maccabiah Games in Israel. His U.S. ping-pong rating was estimated at about 1800, “way below any serious competitive ability,” Collins said.

But I haven’t seen anyone, besides Goldman Sachs itself in its official response, suggest that Smith wasn’t telling the truth. In fact, two years ago, we ran a series of stories on Goldman Sachs that detailed many of the points Smith made in his exit statement.

Watch: Is Taxpayer Money Behind Profits at Goldman Sachs?

One of our key sources was Nomi Prins, who worked at Lehman Brothers for a decade, then Bear Stearns in London, and wound up as a managing director of Goldman Sachs in New York in the year 2000, responsible for elaborate trading strategies. She quit after Sept. 11 and became a journalist, reporting on Wall Street and finally writing a book that’s bitterly critical of her former industry: It Takes a Pillage.

‘Did Goldman have its clients’ interests at heart?’ we asked Prins. No, she said. They’re primarily a trading firm, trading on knowledge that comes in with every trade a client asks Goldman to make on the client’s behalf. 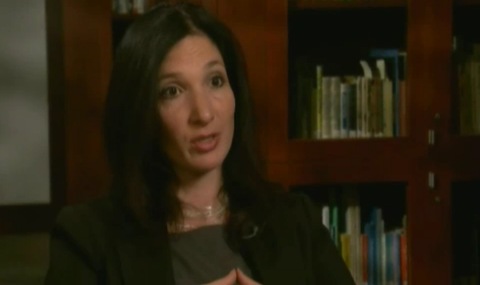 Prins: “Any information that you get, particularly if it’s going to move the markets a lot, is going to filter into the trading positions you take.”

But isn’t this “front running” — trading ahead of your clients (to profit from the price changes that will come from the clients’ trades) for your own firm’s benefit? And isn’t that, strictly speaking, illegal? We put the question to David Stockman, President Reagan’s former head of the Office of Management and Budget who went on to a long, successful and controversial career on and around Wall Street.

“The long and ancient secret of Wall Street,” said Stockman, “is they’ve always been front running their clients! In other words when you’re in the customer trading business and then you’re in the proprietary business, which trade are you making first? I don’t know. And if it’s in milliseconds, how’s anybody going to figure it out?”

One last part of our interview with Nomi Prins may be relevant to the Greg Smith situation, so we reprint it here for the first time:

PAUL SOLMAN: So you were what they called a “quant“?

NOMI PRINS: Yes, I was always a quant, always with numbers and math and analytics and I think that was a part of the allure of Wall Street, where could you go with that? And I sort of got into it and became hooked. Any Type A personality on Wall Street wants to do as well as they can in the environment that they’re in, and I think that was part of how I rose through the ranks of different companies and ultimately became managing director of Goldman. But there was always a sense that the business of making money for the sake of making money isn’t inherently soulful; it just isn’t. It really does make you feel bad and I didn’t like some of the transactions that we were doing.

PS: What was a discomforting deal?

NP: Well there was one deal, for example, about life insurance companies or health insurance companies who were losing money because they had effectively made bets that certain patients would die of AIDS sooner than they were dying, and so as AIDS medicine was becoming stronger and better and keeping more people alive longer//One company came to us to ask how they could structure some sort of a derivative or some sort of a deal in order to help them make money in the event that people would live too long.//I remember saying to the person in my group who brought it up to me: Do you see what’s going on behind this? He was, like: So? I’m, like: It just feels wrong, it just feels wrong!

PS: Not a lot of people say that on Wall Street, do they?

NP: A lot of people don’t say that on Wall Street and a lot of people, myself included, don’t really think about the ramifications of the transactions they do. When trading emerging market bonds, you don’t think about people in Third World countries who are suffering because all this debt is trading around at higher levels than they can ever possibly use to sustain their own existence.

You don’t think about the ramifications that you are trading or packaging the debt or creating derivatives on top of Third World countries where those people aren’t necessarily benefiting from anything you’re doing. In fact, it’s their increased debt and impoverishment that gives you the tools to work with to make money out of. You don’t think of that because you’re just looking at those tools, and everything is very short term and it’s like: ‘Well, we need to make money now, and we’re competing with other firms, and they have this kind of product so we need to have this kind of product.’ The question isn’t, ‘What does this kind of product do to people?’ The question is: ‘How do we sell more of this product than our competitors?’

It was Sept. 11 that made things clear to Prins. Her Goldman office was near the World Trade Towers.

NP: There was some smoke around from the hit. We didn’t necessarily know it was a terrorist attack and the first instinct on the oil desk was: How do we trade this? Because anything that has to do with airlines has something to do with oil and so that’s going to drive something up, so therefore we need to be on the right side of it.

PS: Not even: How do we get out of the building?

NP: Planes had hit; we had gone from a higher floor to a lower floor to basically aggregate, and that happened on the floor where the oil trading happens. We’re all there and phones are dead to the World Trade Center and people were trying to make calls and figure out who was where. And around all of this, there also happened to have been trading going on and decisions being made about what type of trading should go on. //And even frankly after that, a couple of days later, there were police escorts and buses going down from the Upper East Side to Goldman so they could keep trading and keep markets open and they consider this to be a service, I suppose.

NP: I think that was a very final type of straw. The trading on the floor. The buses. Just the whole sort of attitude.