What happened at DC’s restaurants when immigrant workers stayed home

On a typical day in Jesse Miller’s kitchen at Bar Pilar, seven to eight people prep, cook and clean for dinner service. But on Thursday, the executive chef was alone most of the day, while the immigrant workers on staff at the downtown Washington, D.C. restaurant stayed home.

Miller was eventually joined by his bartender and two friends who showed up in the evening to help out. It was an exhausting day — but that was the point, Miller said.

Across the country Thursday, workers at Bar Pilar and hundreds of other businesses participated in a “Day Without Immigrants,” a nationwide protest of President Donald Trump’s policies on immigration, including a now-suspended controversial ban on immigration. Immigrants skipped work or school and held rallies in Detroit, Chicago, New York, Philadelphia, Boston and Washington D.C. to demonstrate their role in the country’s economy and their communities. Other cities staged similar protests throughout the week.

“Some of the workers who are striking said, ‘Are you sure you don’t want us to come in?’” Miller said, in an interview at the restaurant. He told them he was sure. “This is more important than one night of service.”

The strike, which was not planned by one particular group, spread by word of mouth and on social media. Flyers popped up throughout the northeast and Midwestern cities, urging undocumented workers to participate. 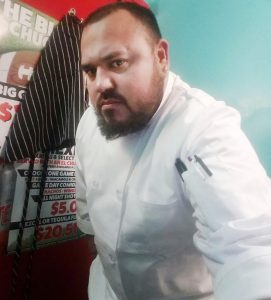 El Chucho chef Saul Canesa, an immigrant who came to the U.S. from El Salvador in 2001. Photo courtesy Saul Canesa

It impacted markets, daycares, hotels and construction sites, but restaurants were particularly affected, as immigrants make up as much as 70 percent of the restaurant industry’s workforce in some cities, according to the Restaurant Opportunities Centers United. Many Americans support Trump’s efforts to tighten immigration laws, and say a bigger focus on legal employment would help the economy. But a number of restaurant owners have argued there should be a better path to citizenship for their undocumented workers.

In the nation’s capital, at least 100 restaurants were closed Thursday, including five eateries owned by celebrity chef José Andrés, 18 locations of salad chain Sweetgreen and all six branches of Busboys and Poets, a popular regional coffeeshop, restaurant and community gathering space.

The entire kitchen staff at El Chucho, a Mexican restaurant in Northwest D.C., did not go to work, so only basic food like chips and salsa were served. The restaurant’s chef, Saul Canesa, an immigrant who came to the U.S. from El Salvador in 2001, joined his staff in striking. He said he hoped the protest would send a message to President Trump.

“He says he’s trying to make America great, but I don’t think without our labor he will make it great.” — El Chucho chef Saul Canesa

“We don’t come here just for what he says, like to bring crime,” Canesa said, referring to the speech Trump made at the start of his presidential campaign, when he said Mexican immigrants “are, in many cases, criminals, drug dealers, rapists.”

“We don’t come just to do whatever we want to do, or send money back home. We also come to work,” Canesa said. “He says he’s trying to make America great, but I don’t think without our labor he will make it great.”

The absence of labor was evident Thursday across Washington. While some popular restaurants —  Bad Saint, Daikaya and Jaleo — shut down entirely, others, like Meridian Pint and Smoke & Barrel, announced they would close their kitchens and let customers bring in their own food.

Other restaurants operated on a limited menu. The owners of Boundary Stone in Northeast D.C., said they would man the kitchen themselves, but only serve a few items and for a shorter period of time than usual.

At Bar Pilar, Miller, who is both head chef and an investor in the restaurant, served a limited menu of Latino-inspired dishes that he made himself, with help from friends. “The idea is for us to feel the pain too,” he said.

Whether to close shop or scramble to stay open, how much food to serve and whether to pay staff were difficult decisions for business owners, many of whom said in interviews that they wanted to show their support but were also worried about the loss of business. 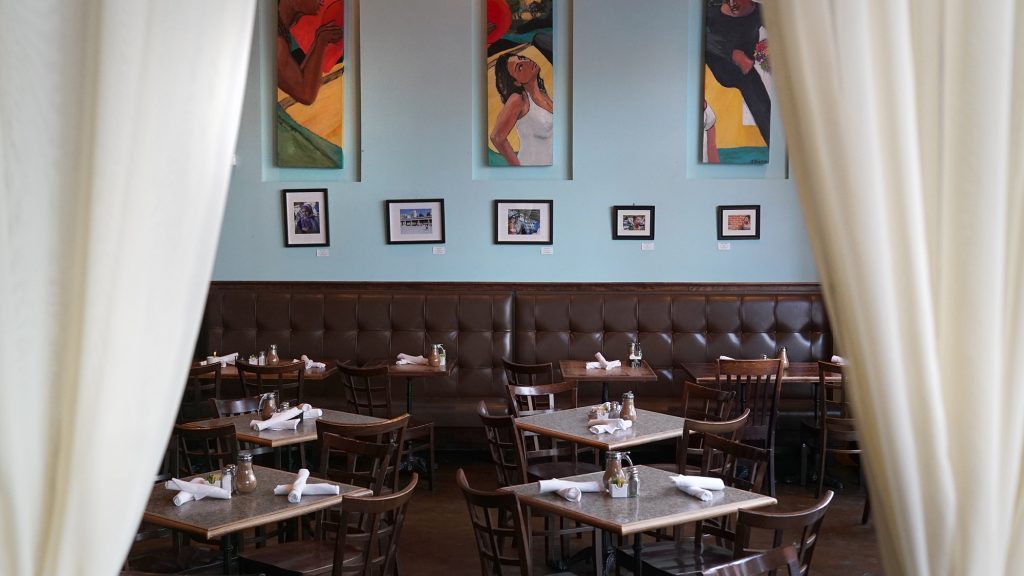 Busboys and Poets on 14th and V St. NW, Washington D.C. is empty on Thursday, Feb. 16, 2017 because they closed for A Day Without Immigrants. Photo by Abbey Oldham.

El Chucho owner Jackie Greenbaum said she made the decision not to serve any food rather than try to cook it herself. “It seemed the point was better made [to say]: we can’t operate without this segment of the population, who are our friends, our family, and our staff,” she said.

But Greenbaum also said she couldn’t afford to pay the hourly wages of the staff that participated in the strike. She anticipated making only a quarter of the restaurant’s usual Thursday night revenues.

Andy Shallal, an Iraqi immigrant who owns Busboys and Poets and is also an activist, spent Thursday drinking coffee at the bar of his location at the intersection of 14th and V Streets, talking to reporters and handing out free coffee. The normally buzzing restaurant sat empty behind him.

“As an immigrant myself, I need to stand in solidarity with them,” said Shallal, who told immigrant workers at his six restaurant that they could take paid leave for the day. 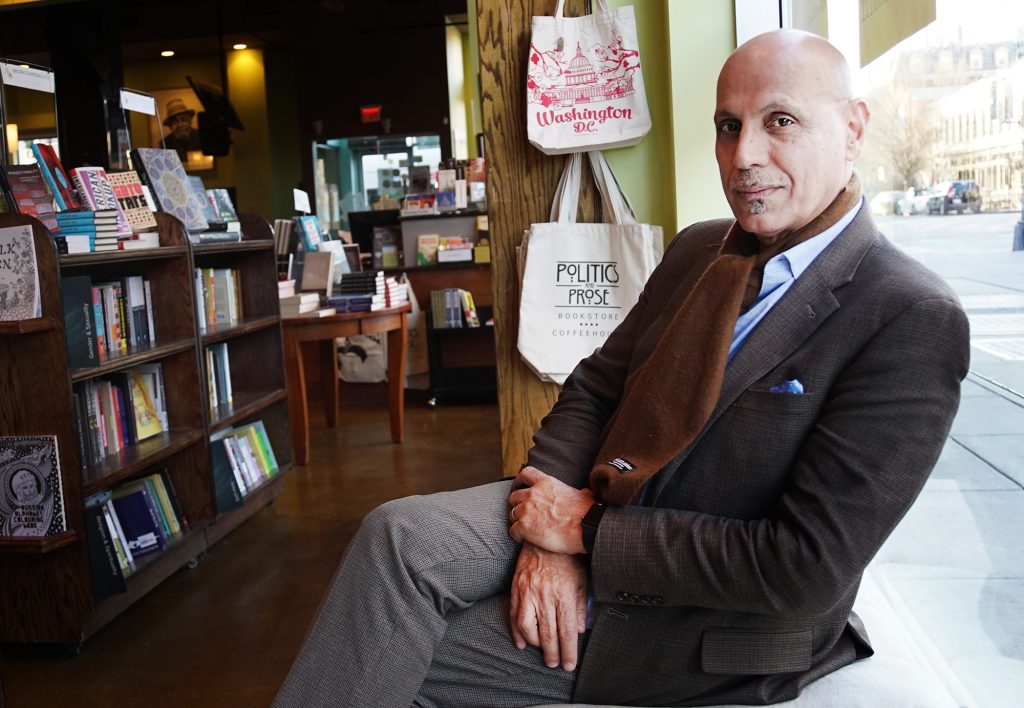 Andy Shallal sits in the window of an empty Busboys and Poets on 14th and V Streets in Washington D.C. Shallal, an Iraqi immigrant, decided to close all six of his restaurants for the “Day Without Immigrants” protest. Photo by Abbey Oldham/PBS NewsHour.

“It’s a big hit obviously. We’re a big place that serves thousands of people a day, tens of thousand of dollars are at stake,” Shallal said. “But again, when you look at the other cost — of not doing anything — it pales in comparison.” He added: “To me, this is insurance. You have to speak up, or you’re going to be on the wrong side of history.”

At Boundary Road, a neighborhood restaurant in Northeast D.C., the restaurant’s beverage director, Ejay Apaga, took food orders all day, and did other tasks usually left to the kitchen staff.

“This is my way of supporting them, being here so they don’t have to,” said Epaga, who was born in D.C. but is of Filipino descent.

Around 6 p.m., Elizabeth Courtney arrived at the restaurant to meet a girlfriend for dinner, only to find out that food was not being served.

“I was oblivious, I went up to the bar, and they said they were closed in support of the immigrant protest,” said Courtney, 23, who recently moved to Washington, D.C. “I mean, I think it’s a cool idea, but I just was supposed to meet someone and we’re a little hungry.”

Other restaurants across the D.C. metro area announced that they would donate profits from the evening to nonprofit organizations that help immigrants. Bar Pilar, for example, said it would donate 75 percent of the night’s profits from cocktails to the American Immigration Council, while the bartenders decided to give their tips to immigrant colleagues who didn’t work to be part of the strike.

Gabriela Saint-Louis, a 24-year-old Haitian immigrant, came with her father to Bar Pilar to order drinks because she knew the money would be donated to an immigration nonprofit.

“I was heartbroken by the ban,” she said, hours after Trump said he plans to issue a new ban next week. “I’m an immigrant myself, and this is not the America I know.”

Many who protested Thursday are planning to strike again. Movimiento Cosecha says it is organizing similar action May 1, as well as a seven-day “Week Without Immigrants” at a later date.

Editor’s note: This article has been updated to reflect the most recent number of restaurants closed for a “Day Without Immigrants.”

Left: Jesse Miller prepares a dish Feb. 16 in the kitchen at Bar Pilar, a restaurant on 14th Street in Washington, D.C. Miller's kitchen staff, all immigrants, went on strike Thursday during a "Day Without Immigrants," a nationwide protest against President Donald Trump's recent action on immigration. Photo by Abbey Oldham/PBS NewsHour.