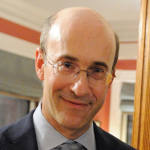 What on earth was India thinking when it banned the $7.50 bill?

Editor’s note: When he was 16, Ken Rogoff dropped out of high school to play chess in the former Yugoslavia and went straight to the top: international grandmaster, ranked 40th in the world. But he gave up playing competitively for three reasons: it was bad for his social life, tournament travel was a drag, and he wanted “to do something more important with my life” (his explanation to BBC radio starts at 11:20 on this podcast).

So instead, he became an economist and now ranks eighth in the world, according to RePEc. Rogoff has appeared often on the NewsHour, talking about everything from his improbable bestseller of 2009, “This Time is Different” (co-authored with fellow Harvard economist Carmen Reinhart) to the economic woes of Greece in our musical look at that disaster.

Last fall, he published a quirky policy book, “The Curse of Cash,” (Princeton University Press, September 2016) urging the elimination of the $100 bill. The prime minister of India went much further just a few months later, with top officials in his administration citing Rogoff in removing all 500 and 1,000 rupee notes from circulation, worth $7.50 and $15.00 respectively. What in the world was going on? We asked Rogoff to tell us, and what he thinks is going to happen.

When writing my recent book “The Curse of Cash,” I could hardly have imagined the radical “demonetization” experiment that India’s Prime Minister Narendra Modi would introduce just a couple months later. India’s demonetization arguably constitutes one of the most remarkable monetary experiments undertaken by any developing economy over the past several decades. Superficially, the Indian government had adopted exactly the kind of policy I suggested (and indeed “The Curse of Cash” was widely referenced). However, there were some rather critical differences as I discuss below, not least of which is that India is still a developing economy, and my book was focused on advanced economies where financial inclusion can far more easily be addressed.

Hate it or love it, pretty much everyone agreed that Modi’s demonetization was something utterly remarkable and would be talked about and studied by economists and policymakers for decades to come.

In a recent visit to India to speak at the Delhi Economics Conclave, I found a remarkable range of views, from genius to insanity. Hate it or love it, pretty much everyone agreed that Modi’s demonetization was something utterly remarkable and would be talked about and studied by economists and policymakers for decades to come.

My own views are discussed in an afterword to a newer July, 2017 version of the book: “The Curse of Cash:  How Large-Denomination Notes Aid Tax Evasion and Crime and Constraint Monetary Policy.” Here is an excerpt:

On Nov. 8, 2016, the same day that Americans were electing Donald Trump as president of the United States, India’s prime minister, Narendra Modi, took to national TV to make a stunning announcement. As of midnight, India’s two highest-denomination bills, the 500 and 1,000-rupee notes (worth roughly $7.50 and $15.00) would no longer be legal tender; citizens would have 50 days to deposit their old notes in the bank or to trade them for new ones. The two notes accounted for 86 percent of currency supply in a country where cash accounts for roughly 90 percent of the value of transactions. In many ways, Modi’s demonetization has proven the most dramatic and far-reaching macroeconomic event to affect this fast-growing nation of 1.3 billion people since the International Monetary Fund-driven reforms of the early 1990s.

To add to the sense of drama, the prime minister forced his cabinet to surrender their cell phones before informing them of his decision, presumably to assure the public that none of his own ministers would profit by it. Modi’s stated aim was to fight “black money,” that is, cash used for tax evasion, crime, terror and corruption. It was a bold, audacious move intended to radically alter the mindset of an economy where less than 2 percent of citizens pay income tax, and where official corruption is endemic. It is important to emphasize, however, that whereas the litany of problems with cash listed by the Indian prime minister is essentially the same as in “The Curse of Cash,” the setting and tactics of implementation are vastly different.

READ MORE: Column: Several governments are destroying their own bank notes. Here’s why.

This book has argued that emerging markets need to be cautious in moving to less-cash societies, in part because they lack the necessary financial infrastructure. Also, there are manifold reasons for moving slowly and deliberately: “Gradualism helps avoid excessive disruption and gives institutions and individuals time to adapt.  It puts authorities in a position to make adjustments as issues arise.”

Another distinction is that India’s largest notes were already modest-sized by international standards, with the 1,000-rupee note being worth less than $15 at the time. The banning of the 500-rupee note, which was in widespread use by ordinary people, was particularly inconvenient, comparable to having the United States ban the $20 bill at short notice. Indeed, the replacement notes included a new 2,000-rupee note, which will presumably be even more valuable in black economy transactions than the old notes it replaced. India’s demonetization was clearly targeted at capturing the existing stock of black money, but in practice this is very difficult for reasons we have already discussed. A much more practical plan is to find ways to raise transactions costs for those engaged in tax evasion, corruption and criminal activity.

Ironically, precisely because the method of demonetization caused so much collateral damage, the Indian authorities had little scope or capacity to sort out black money from “white money.”

But none of these objections captures what was no doubt the single biggest challenge India faced, which is that it did not have nearly enough new notes on hand to exchange for the old ones that had just been demonetized. Evidently, the government had been concerned that if people found out that it was printing new notes, crooks would be given too much time to launder their ill-gotten currency.  Although a rapid recall would have created massive logistical problems in the best of circumstances, it was the need for currency-rationing that led to the most severe dislocations, particularly in the agricultural and rural sectors where business is done almost entirely in cash. Although official figures suggest that the disruption was not as bad as some had initially feared (official GDP still grew at 6.5 percent, about a 1 percent drop from the pre-demonetization baseline), this is surely a significant understatement. Even if output in the formal sector really did dip only 1 percent, the effect on the informal sector — which even in some advanced economies equals 20 to 25 percent of GDP — was surely an order of magnitude larger.

Ironically, precisely because the method of demonetization caused so much collateral damage, the Indian authorities had little scope or capacity to sort out black money from “white money.”  Instead, the government and banks were forced to concentrate on remonetizing the economy as quickly as possible. Efforts were made to report any large and suspicious sequence of deposits, but overwhelmed banks were hardly able to do extensive enforcement. The Indian authorities claim they plan to look closely at bank deposit records in the aftermath of the demonetization and that this will offer a second chance to detect illicit deposits. Whether this approach will have a significant yield remains to be seen.

Will India’s demonetization yield long-term benefits? The answer, of course, depends on the implementation of other government policies to fight black money and corruption and on how well it succeeds in accelerating progress towards financial inclusion. For example, India’s new gross sales tax may make tax enforcement somewhat easier, and the government has been engaging in financial information treaties with other countries to make offshore laundering more difficult. And make no mistake, several of India’s policies to promote financial inclusion and to move towards a less-cash society have already borne fruit. In the text, we discussed the Modi government’s move to have license fees paid online instead of by cash. The provision of free (or heavily subsidized) bank accounts linked to biometric data has helped even illiterate citizens have the possibility of financial inclusion. Interestingly, biometric security has also made it more difficult for corrupt bank employees and state officials to siphon off money into fake accounts, because they cannot so easily produce the biometric signatures required to withdraw funds.

India’s demonetization, no matter how much criticized by economists, has been broadly popular in a country where people are deeply frustrated by endemic corruption, and appreciate the government’s broad efforts to fight it.

Perhaps surprisingly, India’s demonetization, no matter how much criticized by economists, has been broadly popular in a country where people are deeply frustrated by endemic corruption, and appreciate the government’s broad efforts to fight it. Hopefully, the government will be able to build on this good will to implement a basket of policies that will help reduce corruption and crime over time. Certainly, demonetization has greatly accelerated financial inclusion, with hundreds of millions of Indians now taking advantage of heavily subsidized basic debit accounts, a program that until now, had been developing relatively slowly. There is little doubt that multitudes of papers will be written on India’s demonetization, but it could take years to untangle its full effects, which have as much to do with psychology as economics.

Excerpted from a revised version of “The Curse of Cash: How Large-Denomination Notes Aid Tax Evasion and Crime and Constraint Monetary Policy,” by Kenneth Rogoff, Princeton University Press, July 2017.

Left: A man displays a new 2000 Indian rupee banknote after withdrawing from a bank in Jammu, November 11, 2016. Photo By Mukesh Gupta/Reuters

Ken Rogoff is a professor of economics and the Thomas D. Cabot Professor of public policy at Harvard University. From 2001 to 2003, Rogoff served as the chief economist at the International Monetary Fund.