The hottest chart in economics, and what it means

Editor’s Note: The Elephant Chart. Rarely has one economic picture had as much impact as this one. Tonight’s Making Sen$e Thursday story on the PBS NewsHour profiles its creator, economist Branko Milanovic. It explains the rise of populism in the developed world and so much more.

When I met with Milanovic, we discussed his chart in greater detail than a NewsHour story could explore. So here’s a more in-depth look at the implications of his increasingly famous visualizing.

BRANKO MILANOVIC: In June 2012, the first time I saw what would later become the elephant chart, I was immediately struck. I still remember that day, because I thought, well that’s exactly what we all knew had happened. I mean it really worked very intuitively, but we have not seen the numbers to confirm that.

PAUL SOLMAN: And what is it that we knew?

BRANKO MILANOVIC:  We knew that people in China and large numbers of groups in Asia who were not rich, compared to Americans, have done very well. We knew that lower and middle class Americans and Japanese and Germans have not done well. And that’s exactly what the chart shows. And we also knew that the top 1 percent in the rich countries have done well.

BRANKO MILANOVIC: Yes, these processes were already going on from the late 1980s to mid-1990s. There was a discussion among the small group of people who worked on rising inequality in the U.S. We knew that China was growing much faster than the rich world. All the components were there. Actually putting them all together and seeing them as one picture was the novelty.

PAUL SOLMAN: I’ve seen the elephant chart used in a classroom in a way that was suggesting, perhaps subliminally: “Hey, inequality isn’t really so bad because look how many people are benefiting from economic growth around the world. Global inequality is actually decreasing.” 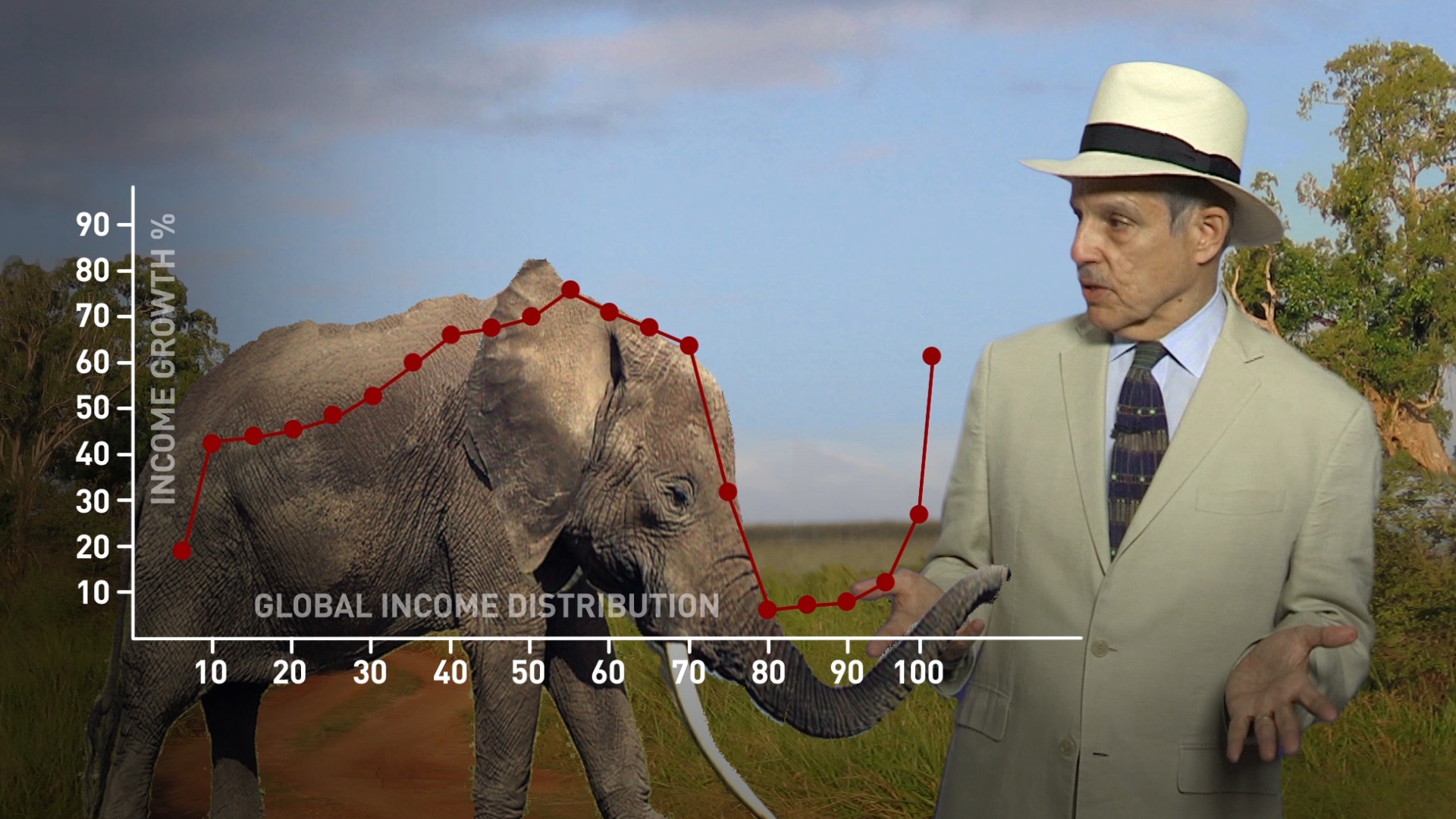 BRANKO MILANOVIC: You know, there is some truth to that. Let me point out two things. The first one is that if you actually look at this chart, you basically don’t see any group of people who have a decline in income. Everybody on that chart is above the point where we actually have zero growth. The second good thing: If you really were to be very cosmopolitan and look at the world as if it were one country, you would say, “Look, we have a situation that a large hunk of people — two and a half billion — have done extremely well. The level of global poverty has actually gone down. These people not only now have sewage and electricity, some have even become tourists. They have better jobs.” This is mainly resurgent Asia.

The problem is that this is a very abstract view of the world, which doesn’t take any cognizance of the political reality. Because the political reality is there are all these people who have done poorly relative to the rest of the world. They feel poor people in Asia breathing down their necks because of outsourcing, because of imports and so on. And then they also see that the top 1 percent in their own countries have done very well.

They are feeling fear from both ends — from one end because the other people are catching up to them and from the other, as people from their own countries are moving further and further ahead.

PAUL SOLMAN: And that’s why the elephant graph has such oomph to it, right? Because you can see, relative to either side of the trough, that it’s the formerly middle class people of the developed world whose outcomes are so different from everybody else in this period.

They are feeling fear from both ends — from one end because the other people are catching up to them and from the other, as people from their own countries are moving further and further ahead.

BRANKO MILANOVIC: Yes, the middle class in the rich countries is where the political game is being played. They are voting in elections in the U.S., U.K., France and Germany. They are working people in the upper part of the global income distribution. They might on average be happy that the Chinese are doing well, but they are not happy that the Chinese are doing well relative to them.

PAUL SOLMAN: Do you explain the rise in populism in the post-industrialized world in terms of the graph?

BRANKO MILANOVIC: Broadly speaking, yes. But let me just make a caveat. People believe, sometimes argue, that the graph overemphasizes the role of globalization. Globalization is one factor but there is also technological change, though in my opinion that is not completely unrelated to globalization, because though there is technological change in iPhones, for example, they are being produced physically thanks to globalization in Burma or Vietnam. It would be different if they were being produced in the U.S. or Sweden.

The third factor is policy: the decline in tax rates, reduced taxation of capital and all of that.

All three elements played a role. But I really believe that, of the three, globalization is probably the most important one.

BRANKO MILANOVIC: Well, the studies that relate to China and Chinese penetration of the U.S. market show that U.S. labor is actually losing. Not only do people lose the jobs themselves, but over the longer term, they go for jobs that pay much less. I believe that people who emphasize technology do it somewhat naively. They believe technological change is some kind of manna from heaven, which happens unrelated to the underlying globalization. I think it’s wrong. It’s actually that you have technological change which pays off in the globalized world.

PAUL SOLMAN: Back around the turn of the millennium, Ralph Gomory and William Baumol did a study in which they said, “Hey, it’s entirely possible that trade and freer trade will hurt lots of Americans, because the rest of the world will start producing what we have been producing. The world may be better off; the American consumer may be better off. But lots of American workers will be worse off.” That argument was treated with great skepticism at the time.

BRANKO MILANOVIC: I don’t understand why people are sometimes surprised by globalization’s effects. This is not something new. We know that in the same process of globalization in the 1950s, 1960s and 1970s, Indian manufacturing, which was really textiles, was essentially wiped out by English competition. So it’s not like something that is now happening with deindustrialization of the West that has never happened to anybody before.

PAUL SOLMAN:  But don’t you think that for every population that experiences something like this, it comes out of left field? Because it isn’t something you’ve experienced before. You haven’t read economic history; you haven’t looked at the enclosure movement in England and said, “Oh, what the hell. This is old news.”

BRANKO MILANOVIC: I agree. The reaction of the people is totally understandable. I’m just saying that the economists who are somewhat surprised by the effects of globalization/technological progress have not paid enough attention to economic history. But for individual people, obviously, they are in shock. One thing was promised to them: Essentially with globalization, they would all get better off and then gradually they see that their wages are stagnant, and they’ve been stagnant for 20 years.

PAUL SOLMAN:  Do you think that the economics establishment sold people a false bill of goods?

BRANKO MILANOVIC: Well I think there are two areas where the economics establishment didn’t pay much attention, and they recognize that now. One is economic history, and the other is equality. If you look at the last 25 years, economic history was relegated to the very lowest rank of anything that was done in economics.

BRANKO MILANOVIC:  They were shut down. And also, in terms of resources and respect, inequality and income distribution were left even further behind. Today, really important issues have come to the fore because of globalization and Brexit and Trump and all of that which have really been totally unstudied or understudied in economics.

I was at the World Bank and a commission reviewed our work on inequality for the U.S. Congress or somebody, and the head of the commission said to us: “You are spending taxpayer money to study issues like inequality? Which goes directly against capitalism and growth.” That was the perception, that it should not be studied.

In the U.S. when people like me started writing things about inequality, the economic journals had no classification for inequality. I couldn’t find where to submit my inequality papers because there was no such topic. There was welfare, there was health issues, there was trade obviously. Finance had hundreds of sub groups.

PAUL SOLMAN:  But now, one of Donald Trump’s top economic advisors, Peter Navarro, whom we’ve talked to, does talk about the effects of globalization on inequality.

So, in the end, what is your interpretation of the elephant chart?

BRANKO MILANOVIC: My interpretation is that it reflects a period of high globalization, which is rebalancing economic power between Asia and Europe and leading to the relative decline of the middle class of the Western countries.

PAUL SOLMAN: Is that a bad thing or a good thing?

BRANKO MILANOVIC: It’s a bad thing for those people who have actually declined. But it could be a good thing for the rest of the world because their incomes went up.

Left: The "elephant chart" explains the rise of populism in the developed world and so much more. Economics correspondent Paul Solman discusses with economist Branko Milanovic.