How High Is High-Frequency Trading? 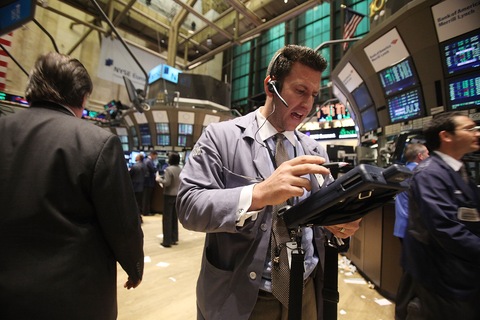 High-frequency trading represents more than half of all transactions of American stocks these days, but just how fast is high-frequency? So fast, it turns out, that data companies now provide financial data to their most premium subscribers early — as little as two milliseconds early in the case of a $20,000-per-month service the Nasdaq and Chicago Mercantile Exchange debuted in May using microwave networks. That time difference is enough to gain quite the financial advantage.

One key data provider, Thomson Reuters, announced this week it was suspending its 9:54:58 a.m. release of the University of Michigan’s consumer confidence data to about a dozen premium subscribers (not to be confused with those regular money management customers who pay to receive the data at 9:55 a.m., a measly five minutes before the University of Michigan posts the consumer confidence index online) while New York Attorney General Eric Schneiderman investigates the practice.

Thomson Reuters maintains that their 9:54:58 a.m. release, for which some clients pay more than $6,000 a month, does not violate federal insider trading laws since they disclose the tiered pricing to all customers.

So how and why do traders capitalize on those all-important two seconds?

Paul Solman dove deeper into the futuristic world of high-frequency trading in a 2012 interview with Robert Harris, whose fictional account of Wall Street depicts traders doing, well, exactly what they already do:

Robert Harris: I thought I was making this all up, but, of course, I then discover that this is yesterday’s news. They’ve been doing this for years. There’s nothing you can invent that these guys, very clever, haven’t thought of before you. Bloomberg News feeds are digitalized and go straight into the machine and buzzwords are picked out: “panic, rumor, fear, slump.”
And, you know, you just get a few milliseconds’, maybe, advantage if the machine can work out what this news story is going to do to the markets in the next few minutes.

Paul Solman: And that’s what your novel gets at, the ability of an algorithm to exploit that anxiety.

Robert Harris: That we are the victims of some sort of gigantic H.G. Wells-like science fiction creation, which is the market, so huge in the numbers of shares and the vast values of transactions every day, so fast with the speed, that it has somehow slipped the control of human beings and almost is itself a kind of Frankenstein’s monster run amok in the world.

And if speed is of the essence, proximity to the computer networks that guarantee that speed is paramount. (Check out this video to see what half a second of high-frequency trading looks like). The increased interest in New Jersey’s wetland warehouses to host fiber optic cables, as this New York Times story captures, proves the point: the closer you are to the data networks of the big financial exchanges, the shorter the cables and the faster data will travel to you on the trading floor.

Kevin Slavin: And this is really where the wires come right up into the city. And the further away you are from that, you’re a few microseconds behind every time. These guys down on Wall Street, they’re eight microseconds behind all these guys going into the empty buildings being hollowed out up around (New York’s point of entry for the Internet at a so-called carrier hotel in Tribeca).

Just to give you a sense of what microseconds are, it takes you 500,000 microseconds just to click a mouse. But if you’re a Wall Street algorithm and you’re five microseconds behind, you’re a loser.

So for whom is this so important? Who’s buying up real estate in beautiful downtown Secaucus, New Jersey?

Robert Harris: They don’t hire anyone to work who has less than a Ph.D. in the natural sciences or mathematics and that (wasn’t) peer-reviewed in the top 15 percent. They don’t even want someone to come and work for them who’s got a degree in economics. It’s too soft.

Paul Solman: The algorithms are actually the brainchildren of top-flight physicists, forced to migrate to Wall Street in the early ’90s when Congress killed the 54-mile-in-circumference supercollider, for which land outside Dallas was already excavated.

Paul Solman explained the intricacies of high-frequency trading in his 2012 interview with novelist Robert Harris.